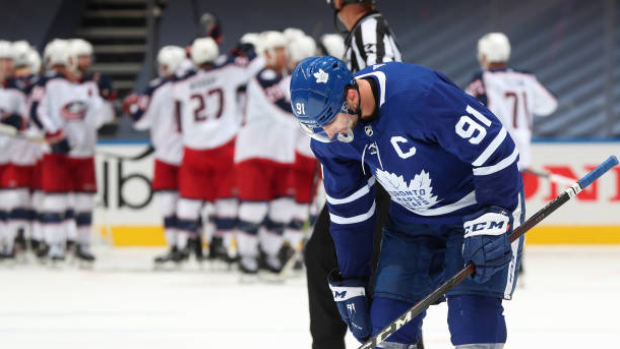 Toronto Maple Leafs stars John Tavares, Morgan Rielly and Auston Matthews all stated a case for patience over significant changes on Wednesday after the team failed to reach the playoff field this season.

"We have tremendous youth. The harder thing to do is staying the course of the group and for us...asking a lot of tough questions and challenging one another to be better," Tavares said during an end-of-season media call.

"As a core, we believe in what we have and how we play. It's just a matter of doing it more consistently and [playing] harder," defenceman Morgan Rielly added.

"This core believes we're right there," centre Auston Matthews said. "We don't really care what other people think, or how far away other people think we are... we're going to power through this adversity and we'll break through eventually."

"We're young and there's still a long way for us to go to get where we want," added William Nylander, who moved to centre in Game 5 as head coach Sheldon Keefe put Tavares, Matthews and Mitch Marner on a line together. "We've played together and we're going through everything together and I think it's a valuable learning experience."

Jake Muzzin on confidence in #Leafs core: "I think we have a lot of guys who want to win. And that's the belief I have. The wanting to win is crucial to drive players, and I believe it's in there. I believe this group is capable of winning it all."

The Maple Leafs lost Game 5 to the Columbus Blue Jackets in their play-in series on Sunday to miss out on the playoffs. Toronto has not won a playoff series since 2004 and exited in the first round of postseason in each of the previous three years.

"We're disappointed, and it sucks to be in the spot we're in," Tavares said. "That just has to continue to fuel the fire. The consistency has to be a lot better... but when you go through a lot of tough moments, you have to embrace [those] obstacles."

"Doubt creeps in when you're down in a series, and it's about being mentally strong, keeping that edge and really being able to push through," said Reilly. "So I think that's an area that we have to work on."

"A lot of it is mindset," noted Matthews. "We have to figure out playoffs, and how to get out of the first round. I think four years [of losing], obviously it's pretty frustrating and a little bit embarrassing as well."

"I'm frustrated and everybody's frustrated, our team's frustrated, we're not happy with results," said forward Zach Hyman. "We're building towards being in a position where it's going to stop sucking."

"It's been one game that's the reason we're going home early," Marner said. "I don't know how to explain it. I don't know why we can't get the job done. It's frustrating. [But] it's going to be really fun to have Sheldon as a full coach this year."

Mitch Marner on his series vs. #CBJ: "The first game, I wasn't engaged at all, in the physicalness of play at all. And then from that point on, I felt like I got a lot more engaged and playing as my old self...but zero goals isn't going to get the job done."

"I have complete faith in Kyle as a general manager, in Sheldon as a coach and complete confidence in what we're going to do here in Toronto," Shanahan said.

"We're not being outclassed in these playoffs," he added. "We're not going to the playoffs and running into teams and saying like, 'wow, we're miles away.' But we're not getting over that final hurdle."

Kyle Dubas on if #Leafs management has misread the potential of this team: "No."

Named captain of the Maple Leafs prior to this season, Tavares took accountability for his role in the team's failings.

Tavares, who signed a seven-year, $77 million with the Maple Leafs in 2018, had two goals and three points in five games against the Blue Jackets. He had 26 goals and 60 points in 63 games during the regular season.

Dubas, meanwhile, defended the play of Marner who called himself out earlier in the day for not being engaged in Game 1.

"I don't get the criticism of Mitch Marner one bit," Dubas said. "I really struggle with it. Everything that he does wrong, people jump all over him about it. I don't know how or why it's that way. It's among the most idiotic things I see done here."

The Maple Leafs have just $4.59 million in projected cap space for next season with 17 players under contract, Dubas said Wednesday, however, the Leafs are not pressed for space.

"We're not up against the cap, contrary to everyone's belief," Dubas said.

Defencemen Tyson Barrie and Cody Ceci along with forwards Kyle Clifford and Jason Spezza are slated for unrestricted free agency. Barrie said Wednesday he has "no idea what the future holds."

"A bit of a disappointing year all around," Barrie told reporters. "I would have loved to have helped this team more. We've got a great group of guys here and I'm really pulling for them going forward."

"I know that I'm not the player I once was, but I do feel like I can help quite a bit, and the fire still burns and I really hope to be back here next year," said Spezza.

"It's special to play for the Toronto Maple Leafs," Spezza continued. "As a Toronto boy, it's something I dreamed of. You wanted to be a part of something special. I didn't take for granted any day with a jersey on and it's really disappointing to be done this early."

Tyson Barrie on why he left Game 5: "I banged my head on the ice pretty hard. Had some headaches and they're pretty careful with the concussion stuff. I'm feeling pretty good right now."

Goaltender Frederik Andersen, who is under contract through next season at a cap hit of $5 million, said he's not focused n his future.

"Whatever's going to happen, will happen," the 30-year-old said. "I can only focus on what I can control."

Frederik Andersen on #CBJ series: "I felt the most comfortable I've felt in a playoff series. We didn't get the job done, which is frustrating. If we keep learning and keep building, eventually it's going to click and we're going to be really dangerous."