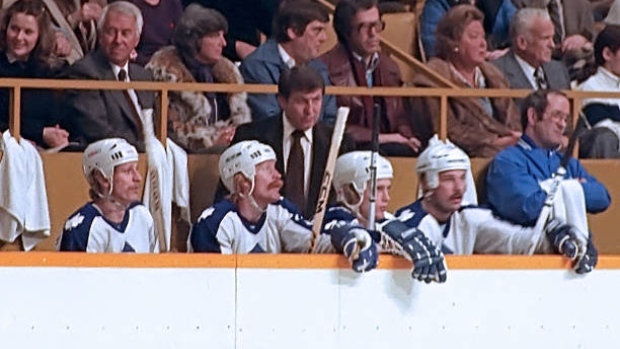 TORONTO — Mike Nykoluk, who captained the Toronto Marlboros to a Memorial Cup title and went on to coach the NHL's Maple Leafs for three and a half seasons, has died. He was 87.

The Maple Leafs confirmed Nykoluk's death on Twitter. A cause of death was not given.

We are deeply saddened to learn of the passing of Mike Nykoluk.

Mike captained the 55 Memorial Cup winning Marlies before going on to play 32 games for the Maple Leafs. He later served as the Maple Leafs head coach for 4 seasons, from 1981-84.

Our thoughts are with his family. pic.twitter.com/Yk4dWMlA45

Nykoluk led a Marlboros roster that included Bobby Baun, Al MacNeil and Bob Pulford to a 4-1 win over the Regina Pats in the best-of-seven 1955 Memorial Cup final.

He played 32 games for the Maple Leafs in 1956-57, scoring three goals and adding an assist.

He was assigned to the Rochester Americans during that season. While he wouldn't play another NHL game, he had an outstanding AHL career, primarily with the Hershey Bears.

Hershey said in a statement that Nykoluk, affectionately known as "The Big Bear," would be honoured before the Bears' game Wednesday against Hartford.

Nykoluk joined the Philadelphia Flyers as an assistant coach to Fred Shero and helped them to Stanley Cup titles in 1974 and 1975.

He took over from the fired Joe Crozier behind the Maple Leafs' bench halfway through the 1980-81 season. The Leafs went 15-15-10 under Nykoluk the remainder of the season before being swept by the eventual Stanley Cup champion New York Islanders in the opening round of the playoffs.

Toronto missed the playoffs the following season, then returned in 1982-83 before losing 3-1 to the Minnesota North Stars in the Norris Division semifinals.