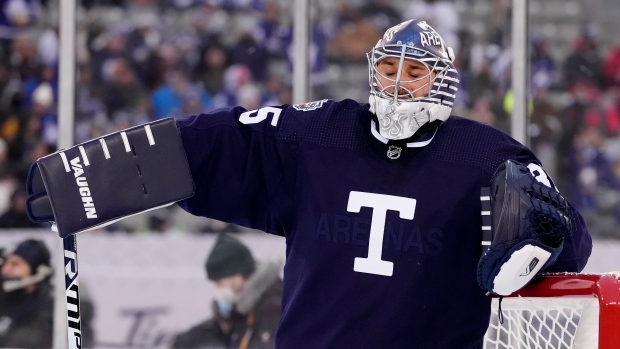 Sateri, 32, needs to clear waivers before he can join the Leafs for the remainder of the 2021-22 season.

Petr Mrazek (TOR) among those placed on waivers today.

Goaltender Harri Sateri has signed with the #leafs for the remainder of the season, subject to clearing waivers. He's on the waiver wire today.

Sateri had a standout season with KHL Novosibirsk Sibir and won Olympic gold with Finland in Beijing.

The 30-year-old Mrazek has appeared in 17 games this season with the Maple Leafs, posting a record of 10-6 with a 3.48 goals-against average and a .884 save percentage.

Mrazek is in the first season of a three-year, $11.4 million contract.

Sateri won gold with Finland at the Beijing Olympics and posted a 14-16-5 record with a 2.02 GAA and .926 SV over 38 games in the KHL this past season. He has nine game of NHL experience, all with the Florida Panthers during the 2017-18 campaign.

Here is the full list of players placed on waivers on Sunday: