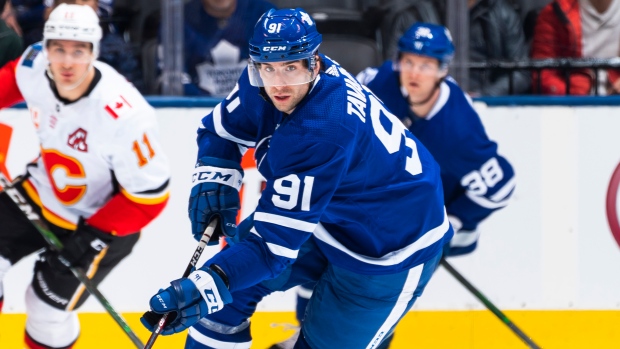 "I've got a few things done," the Leafs centre said following Saturday's 75-minute practice. “It's not something you've ever been through so it takes a little time to think about it. You'll have to wing it a little bit."

Tavares isn't really the 'wing it' kind of guy. He's all about preparation and details and being ready. But playing professional hockey in a pandemic is going to be unlike anything anyone has seen before.

"You'll have to continue to adapt and expect the unpredictable and just be able to deal with it," said Tavares, who will turn 30 in September. "If there are certain games that go into overtimes and push the start times later that's something you've never dealt with before, so there's a possibility for a lot of different things. You just have be very open-minded and adjust on the fly and deal with those circumstances."

"We have to deal with the momentum swings that you see in playoff series better than we handled some things in the regular season," Tavares admitted.

In uncertain times, Tavares believes his teammates understand the opportunity at hand.

"Pandemic's given [us] perspective on a lot of different things," he said. "We know what a lot of people are going through, what the world's going through, society, and to be able to do this, have a chance to complete this season, continue to compete and chase the Stanley Cup, there's nothing better than that."

The Leafs players will report to the practice facility on Sunday morning to undergo COVID-19 testing, but then they will have the afternoon off to spend with family and make final preparations for what they hope will be the longest and strangest road trip of their lives. The team will re-assemble at night and take a bus to the Fairmont Royal York.

Sheldon Keefe, like Tavares, wasn't packed as of Saturday afternoon.

"My wife has helped to really set aside a lot of things for me to be able to choose from," Keefe revealed with a smile. "It's going to be a challenge for me to not overpack and keep it simple and make sure I've got the things I need. I do tend to overpack for a lot of road trips just to give myself options but I want to stay a little bit lighter in this case and not over think it."

It's easy to overthink things these days and so Keefe's message to the team echoes that of his captain.

"Expect the unexpected and be comfortable being uncomfortable," said Keefe, who will turn 40 in September. "That's a big part of it here. We just have to take things as they come, not complain, just keep our head down and continue to work and be as prepared as possible, as focused as possible for the challenge ahead ... We've put in the work here over the last couple of weeks – and even further back if you look at Phase 2 – to be as prepared as we can be for the physical demands of what's to come. The mental part of it now, we've just got to remain focused on what we can control."

One wonders what is going through the head of Nick Robertson, who has never played an NHL game, but once again found himself skating on Toronto’s third line at Saturday’s practice. Afterwards, Keefe laid out a litmus test the 18-year-old must pass in Tuesday's lone exhibition game if the Peterborough Pete hopes to crack the Game 1 lineup.

"He needs to look comfortable," Keefe said. "He needs to make an impact on the game, be it through his work ethic and enthusiasm or his ability to create some offence and capitalize when he gets chances. All those kinds of things. Really looking to see, can he look like himself and be able to play what I suspect is going [to be] the highest level, highest calibre of game that he's played in? ... We’re just really looking to see if he can be comfortable and be himself and then see how it all sorts itself out in terms our other players."

The other players battling for that last forward spot appear to be Pierre Engvall and Frederik Gauthier. At Saturday's practice, Engvall skated between Kyle Clifford and Jason Spezza on the fourth line while Gauthier was the 13th forward.

“We're just trying to keep all our options open," Keefe said. "So between Engvall and Spezza we wanted to get them some reps at centre ice and playing low in the defensive zone and those types of responsibilities that come with it. We want to remain as flexible as possible and remain as prepared as possible for any decision that we might make."

Zach Hyman is getting ready for the playoffs and also to be a dad.

"Unfortunately, I've got a baby coming," the winger said of his imminent departure. "I'm lucky that the baby's due in December. Some guys, they’re leaving young kids and expecting mothers during the time we're away. But we're going out there and doing what we love. Everybody going in the bubble understands. You make sure your family is taken care of while you’re away."

Hyman's wife, Alannah, will move in with his family during the playoffs, which gives the 28-year-old some peace of mind.

The stringent safety rules in Phase 4 mean teams will mostly be spending time amongst themselves, especially early on, and Hyman may end up picking the brain of some of the dads on the Leafs, including Tavares, Spezza, Clifford and Jake Muzzin. Who's at the top of the list when it comes to asking for advice?

"Come on, Spezz! He's got four of them so he knows what he's doing," Hyman said with a chuckle. "I'm sure I'll be asking him for lots of advice."

A detailed look at the NHL's safe zones and arenas for the Return to Play format. 👀

Keefe has made it clear how valuable Toronto's one exhibition game will be in terms of both evaluating players and also how much progress the team has made when it comes to incorporating system tweaks, especially on the defensive side of things.

There are plenty of other questions that need to be answered as well.

"One of them is the conditioning level of our group and seeing how we get through that in a game environment and playing three full periods, stop time," Keefe said. "I've got to manage that ... I want to try to make sure I get them the appropriate minutes to prepare them for what's to come but, of course, not overdoing it and putting them in bad spots so that’s a challenge."

The Leafs held six scrimmages during Phase 3, but only once (Sunday July 19) did they play a full 60 minutes.

How intense will Tuesday's exhibition game against Montreal be?

"You treat it like a real game, because that's the only way you can get prepared," said Hyman. "I think all these exhibition games will be pretty intense and up tempo and I don't think anyone will be holding back."

"It will be competitive," the defenceman said. "I'm not sure if guys will be really throwing the body. You don't want to lose a guy going into the meaningful games, but I'm sure it'll have a good pace to it. It'll be fast, if anything. I'm not sure if you'll see the typical dump and run guys over kind of thing that you might see in Game 1 of the play-in, but it will be good to get a game in and see what it's like with no fans and have the arena set-up, because it might be a bit odd."

So, what exactly happened these last two weeks? Glad you asked.

It’s the return of #Leafs Training Camp Takeaways, presented for the first time ever in late July.

This is - dare I say - unprecedented: https://t.co/SZ35CIzugt

The exhibition game will be a key test for Toronto's power play, which struggled to convert down the stretch. Despite the four-month pause, assistant coach Paul McFarland hasn't made any big changes to the system or personnel.

"The same idea," Barrie said of the unit's marching orders. "We have the same crew."

How are things feeling so far?

"You never get the full feel for it until you're in an actual game," Barrie said. "We won't know until we get it going."

After the coaching change, Toronto’s power play took off connecting on 27 of 86 chances (31.4 per cent) and leading the league from mid-November to early February. But from Feb. 8 to the end of the regular season, the Leafs connected on just six of 41 power-play chances (14.6 per cent), which ranked 26th in the NHL in that stretch.

"When we were really going well it was just simple," said Barrie, who has retained his job as quarterback of the top unit. "We were moving the puck quickly and shooting when we should and not over-complicating things. You can see [things work well] when we shoot and there’s a rebound and something special will happen off that either Mitch [Marner] finds someone backdoor or William [Nylander] or whoever would find the open guy. I think that's when we're at our best, when we're firing the puck and making plays off the rebounds and retrievals."