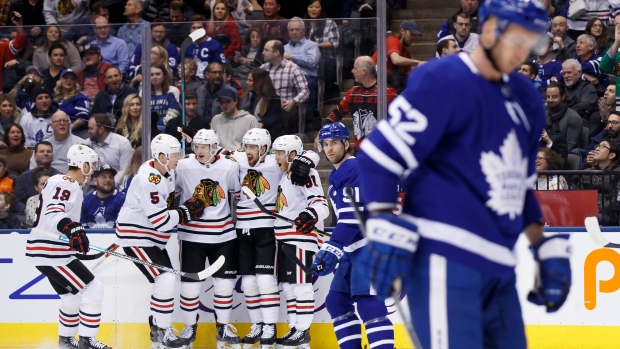 TORONTO – Following the Toronto Maple Leafs’ second loss in less than a week by four goals – this one a 6-2 drubbing by the Chicago Blackhawks on Saturday - head coach Sheldon Keefe didn’t mince words about the state of his suddenly struggling club.

This one has come about in a big way for Toronto, which will adjourn for the bye week and All-Star Break with only one win in its last six games and having fallen out of an Eastern Conference playoff spot. The Leafs were still in the postseason picture on Saturday afternoon, but their abysmal performance against Chicago coupled with wins by Columbus, Philadelphia and Florida pushed Toronto to ninth place in the East.

“It's not a good feeling,” surmised John Tavares, who was minus-two against the Blackhawks. “So we’ve got to dig down and ask ourselves where we want to get to and [find] the consistency we need on a daily basis to get there.”

Tavares said it “doesn’t matter” that the Leafs were playing the final game before a seven-day break and the Blackhawks were not. Toronto was inexplicably sloppy from the outset, giving up the first goal to Drake Caggiula only 21 seconds into the opening period and trailing 3-0 before the 12-minute mark.

William Nylander got one back for the Leafs with a power play strike early in the second to make it 3-1, but nothing else much changed about Toronto’s lazy defensive play and Chicago easily put them away to sweep the season series.

“I don't have that answer,” Keefe said, on why the Leafs started so poorly. “I didn't have that vibe going into it, but from the drop of the puck here, we didn't have a lot of life, and then we’re down early and it’s a tough game from there.”

That was especially true for Frederik Andersen, who allowed three goals on the first six shots he faced, and finished the night with 28 saves and a .824 save percentage. It was the eighth time in his last 11 starts that Andersen has been sub-.900, and while Keefe didn’t pull him for what would have been the third time in four games, the goaltender is well aware there’s work to be done individually and as a team.

“I think it's time to just look in the mirror right now for everyone here, myself included,” Andersen said. “I think it's not a time to point fingers or anything like that. I think you've got to use this week to reflect and make sure we come with more intensity and more purpose when we play after the break.”

Andersen received a dose of Bronx cheers from the crowd for making a save after Chicago was up 5-1 in the second, and admitted he couldn’t just tune that negativity out.

“I think it’s easier for players to play well when they have support,” he said. “Sometimes you don’t get it. But you also have to work and play well to get that kind of support.”

As far as his teammates are concerned, Andersen doesn’t deserve the blame for Saturday’s loss or what’s gone wrong in general lately, regardless of what the numbers show.

“It's not on Freddie. I think it's pretty clear the opportunities that we're giving up,” Tavares said. “And he gave us a chance, we made it 3-1, and he made some big saves right around that point in the game. We just didn't get our game going and we got to do a better job in front of him. I feel bad for him because we just don't do a good enough job consistently with the opportunities that we’re giving up and the way we're careless at times.”

With a week off now to sit on what’s gone wrong, the Leafs should have ample motivation for the stretch run of 33 games waiting on the other side of their break. A first order of business will be tackling that immaturity Keefe sees holding the Leafs back, and pulling it out by the roots.

“I think we have to just continue to remind them of it,” he said. “I think what's nice about events like this, and events like Florida, is it's obvious it's right there. It’s just about us reflecting as a group on what we want to be about. It's on me to help bring that out of them, but I also think that there's some reflection [needed] there about what we want to be about.”