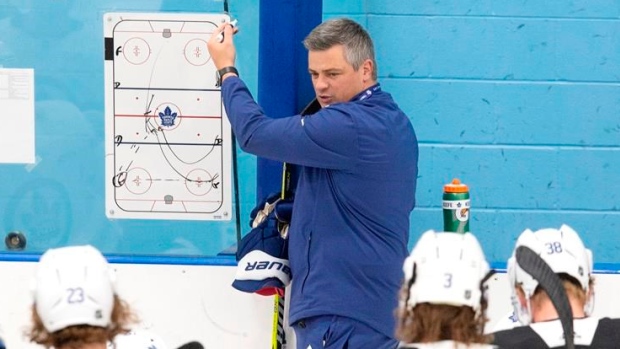 The Toronto Maple Leafs and head coach Sheldon Keefe have agreed on a two-year contract extension, according to TSN Hockey Insider Pierre LeBrun.

Keefe was entering the final year of his contract and is now signed through the 2023-24 NHL season.

.@PierreVLeBrun on Insider Trading said #Leafs wanted to remove any distraction of having Sheldon Keefe coach on final year of his contract, hence two-year extension. But, it's not a really long one.

"They believe in him, but it's a prove-me contract at two years, not five."

LeBrun reports the Leafs wanted to remove any distraction from having Keefe coaching on the final year of his deal.

"They believe in him, but it's a prove-me contract at two years, no five," LeBrun said on Insider Trading.

Keefe took over from Mike Babcock, who was fired midway through the 2019-20 season. During his season and a half at the helm, Keefe has gone 62-29-12 but the Leafs have been unable to advance past the opening round of the Stanley Cup Playoffs.

LeBrun provided more details on Keefe's extension Thursday. Here is what he has to say:

"He was entering the final year of his contract and I think that’s exactly why the Leafs organization felt it was important to remove that distraction in the crazy Toronto market that he was not a lame duck coach. And as soon as they have a losing streak, this was not a narrative. So they’ve signed him to a two-year extension – and listen, it’s not a five-year extension. I’m sure a lot of people are saying why sign this guy to an extension now after they’ve lost out in the opening round of the playoffs two years straight. On the flip side, this is his first full 82-game season with the Toronto Maple Leafs. They believe in him, but it’s a prove-me contract still at two years, not a five-year extension."