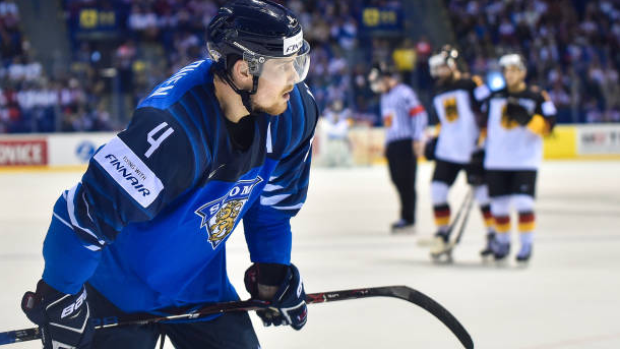 The Maple Leafs signed former KHL defenceman Mikko Lehtonen to a one-year, entry-level contract on Monday, adding versatility and depth to a blueline in need of both.

But where exactly Lehtonen will fit in – on the right or left side – is a question Toronto can’t answer until the fate of this NHL season is decided amid the COVID-19 pandemic.

"It’s such a hard thing to answer right now [what side he’ll play],” said Leafs general manager Kyle Dubas on a conference call with reporters Monday. "It would be easier if our season was over and we knew more about where we were at, but I think we want to hopefully get back and finish our season and evaluate things from there. And then determine whether we want to try him on both sides. I think that versatility really helps.”

That was one of many attributes that drew Toronto to Lehtonen. The 26-year-old is a mobile, two-way defender coming off the best season of his professional career with the KHL’s Jokerit, where he led all league defencemen in scoring with 17 goals and 49 points in 60 games. He also added three more assists in six playoff games and was named a KHL All-Star.

Jokerit announced on May 1 that the team and Lehtonen had “mutually agreed to part ways,” freeing the defenceman to sign anywhere he liked. While declining to say how many other NHL teams he spoke to before landing with the Leafs, Lehtonen was confident in making his decision quickly.

“I think the Leafs are a really good organization,” Lehtonen said. “I think my game will fit pretty well with Toronto because they want to skate well, and I think that is my strength.”

Previously undrafted by an NHL team, Lehtonen has built his way up slowly, primarily in the Swedish Elite League. That’s where he first found that, despite being a left-shot, he was also comfortable playing on the right side.

Lehtonen started racking up accomplishments as an unheralded prospect, winning gold with Team Finland at the 2014 World Junior Championships. A Swedish Hockey League title with HV71 followed in 2017, and then another gold medal, this one at the 2019 World Championships.

The defenceman played a critical role in that tournament for Finland as coach Jukka Jalonen’s workhorse, and Lehtonen kept improving from there in the best season of his professional career with Jokerit.

With a new NHL deal in hand, Lehtonen can feel how much his perseverance has paid off.

“I think I wasn’t that good at that time [when I wasn’t drafted],” Lehtonen said. “Hard to say one thing [as to why]. There were always good players being drafted, so I didn’t make it. But it doesn’t matter. I proved I can play at a really high level and you can still sign an NHL contract if you work hard.”

The 5-foot-11, 196-pound blueliner has his sights set now on a spot in the Leafs’ top six for next season, battling a handful of other players already in the fold that Toronto is still evaluating.

“As we go ahead, we know we’re going to have Morgan Rielly, Jake Muzzin and Justin Holl,” Dubas said. “We’re going to be able to bring back [restricted free agent] Travis Dermott. And then we’ve got our younger guys in Rasmus Sandin, Timothy Liljegren, Teemu Kivihalme and Calle Rosen. And then you’ve got the decision on the UFA guys in Cody Ceci and Tyson Barrie.

“I think we’re trying to continue to build our depth there and we like our options, but it’s an area we need to see progress in – whether it’s the development of players like Dermott, or Sandin and Liljegren, or it's the acquisition of players like Mikko.”

Lehtonen is the latest in a long line of overseas player acquisitions that Dubas attributes to the diligence of senior director of player evaluation Jim Paliafito, who just reeled in ex-KHL forward Alexander Barabanov for the Leafs last month.

That means Lehtonen won’t be the only one trying to find his footing in a new country with a new team when next season begins. Lehtonen says he’s somewhat friendly with Leafs’ forward Kasperi Kapanen, but for the most part he’ll be coming in blind, just looking to make a good first impression.
​
"I know Toronto is a traditional organization, they have great fans. And I think I’m going to learn a lot [too],” Lehtonen said. “I’m a good two-way defenceman who can skate well and move the puck well, shoot the puck well. Those are my strengths and I hope I can bring those.”