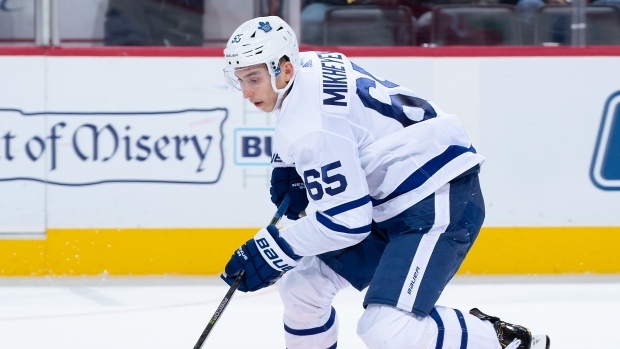 Mikheyev had exercised his right for an arbitration hearing earlier this month after the Leafs extended a qualifying offer to the pending RFA but then failed to find common ground with his camp on a new extension. The 26-year-old had been looking for a one-year, $2.7 million deal from Toronto, while the Leafs initially countered with a two-year contract, averaging $1 million per season.

According to CapFriendly, the Leafs are now exceeding the NHL’s flat salary cap of $81.5 million, with RFA Travis Dermott still left to be signed. General manager Kyle Dubas said in a conference call on Sunday he was waiting for Mikheyev's deal to be done before turning the team's attention to Dermott. Toronto can be 10 per cent over the cap until the 2020-21 regular season begins, at a date still to be determined.

Mikheyev’s case was an especially interesting one to consider from both sides, given how the forward’s promising rookie season was cut short by a gruesome injury.

Never originally drafted by an NHL club, Mikheyev’s stock built slowly over four seasons in his native Russia with the KHL’s Omsk Avangard. By the end of his career-best 45-point campaign in 2018-19, several NHL clubs were making offers, but it was the Leafs who landed Mikheyev in May 2019 on a one-year, entry-level contract.

Starting out in a third-line role for the 2019-20 season, Mikheyev scored in his NHL debut, and put up seven points in his first 10 games. He continued to show versatility from there, able to play on either wing and hold his own in the top-six when necessary.

Mikheyev had amassed eight goals and 23 points in his first 39 games when his freshman year took a brutal turn. Facing the New Jersey Devils on Dec. 27, he suffered ligament damage when Jesper Bratt’s skate blade accidentally cut into his right wrist. The injury required surgery to repair and Mikheyev was not able to return before the NHL hit pause in March amid the global COVID-19 pandemic.

He was back to full health for Toronto’s qualifying-round series against the Columbus Blue Jackets in early August, but Mikheyev was ineffective and failed to register a single point through those five games, as the Leafs fell three games to two.

Despite that poor showing, Mikheyev’s speed, hockey sense and hard shot make him a valuable addition to the Leafs’ offence going forward and he projects to play in the top-six again next season.