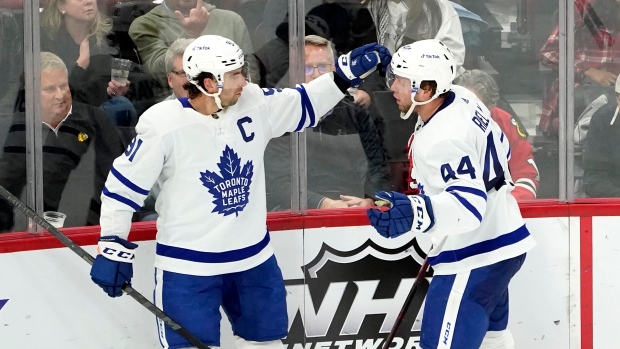 CHICAGO (AP) — William Nylander scored in overtime to lift the Toronto Maple Leafs over the Chicago Blackhawks 3-2 on Wednesday.

The Leafs snapped a four-game losing streak with the victory, and extended the Blackhawks’ record to 0-6-1.

Nylander broke in on a 2-on-0 and snapped a wrist shot past Lankinen in in OT.

The Maple Leafs outplayed Chicago as the game went on, but the Blackhawks ended one streak early, taking the lead for the first time this season when Dach beat Campbell with a power-play wrist shot over the glove side 5:44 in.

The Blackhawks had been tied or trailed for more than six games at that point, the longest such streak in the NHL since 1979-80.

Tavares cut the lead to 2-1 at 6:14 in the second, outmuscling Jonathan Toews in the slot and backhanding a shot over Lankinen’s glove hand.

Kampf, a former Blackhawk whom the Leafs signed as a free agent in July, tied the game at 2, beating Lankinen on a sneaky backhand from the slot with 7:29 left in regulation. Kampf took a pass from Rasmus Sandin on the boards and barely looked at Lankinen as he let the shot go.

NOTES: Chicago’s Patrick Kane, Henrik Borgstrom, Jujhar Khaira and Riley Stillman remain in COVID-19 protocol and missed the game. Toews tested negative earlier on Wednesday and was put back on the active roster. … The non-sellout crowd in the United Center was noticeably subdued in the day after revelations that team executives in 2010 failed to take allegations of sexual assault by then-assistant coach Brad Aldrich against a backup player to authorities. The player, Kyle Beach, came forward in a Canadian television interview on Wednesday.

Chicago: Hits the road for two games against teams that are 5-0-0, at Carolina on Friday and at St. Louis on Saturday.