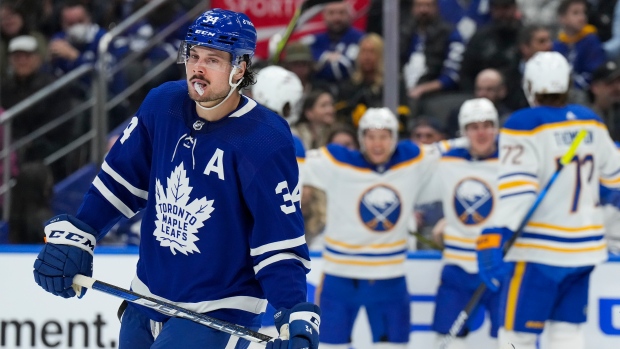 Matthews, along with injured defenceman Jake Muzzin stayed out late after the team's morning skate, and head coach Sheldon Keefe neither will play as the Maple Leafs look to close in on clinching the No. 2 seed in the Atlantic Division.

Erik Kallgren is expected to make his 10th start of the season for the Maple Leafs against the Lightning after Jack Campbell started the team's previous two games.

Matthews, a native of Scottsdale, Ariz., is currently two goals shy of reaching the 60-goal plateau for the first time and is four goals ahead of Edmonton Oilers forward Leon Draisaitl for the Maurice (Rocket) Richard Trophy lead.

Keefe said Thursday there's no extra concern with Matthews, noting the centre is close to playing and looked good in the morning skate in Tampa.

"It's just not worth him having to play through anything, as minor as it might've been," Keefe said Sunday of Matthews. "We got to be smart with those kind of things. If it was a playoff game, he's probably playing."

At that same time, Keefe refused to divulge the nature of the injury, citing that it won't matter as Matthews will be over the ailment quickly.

"Given the time of year and the fact it's pretty minor and I think he's going to move past it pretty quickly," he said. "So, we'll just leave it at that."

Matthews suffered the injury during Saturday's 5-4 overtime victory over the Ottawa Senators and is considered to be day-to-day.