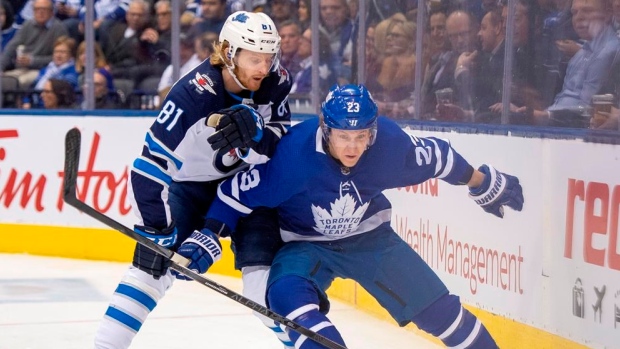 The Leafs held an optional skate at Scotiabank Arena on Saturday.

After missing two games earlier this week with a calf injury, defenceman Travis Dermott returns to the Leafs lineup tonight.

"I'm anxious to see him in there," coach Sheldon Keefe said.

The 24-year-old, who's entering his fifth season with the Leafs, has struggled to stand out during training camp.

"I'm still waiting, and I've had this conversation with Travis, for him to take that next step," Keefe said. "Right now, he's still in that mix with [Rasmus] Sandin and [Timothy] Liljegren and at this stage he wants to be a guy who's more established and taking that step. We're still looking for that."

Dermott started last season's playoff series against Montreal as a healthy scratch after losing his left-side spot to Sandin, who finished the regular season strong and found a role on the top power-play unit.

The departure of Zach Bogosian, however, opened up a spot on the right side where Dermott, a lefty, has played most of camp opposite Sandin.

"Certainly, he brings value to our group in the five, six hole," Keefe. "He has played higher in the lineup when needed and has done a pretty good job, but I think he would like to get to the point where that's something that's consistent and we haven't got to that point yet."

"Just about consistency," Keefe said. "Consistency in decision making. Consistency in [an] ability to play physical and be hard on opponents and consistency in being relied upon as a penalty killer and taking consistent minutes there. You're looking for a young player to really latch onto a role and an identity of what they're bringing to the team."

Dermott found himself skating with Alex Biega, who was placed on waivers on Saturday, during the last two practices while Liljegren joined fellow Swede Sandin on the third pair.

Liljegren will be a scratch tonight, but has solidified himself as the next man up should someone get hurt or falter.

"We're very confident in that," Keefe confirmed. "That's the one thing we were hoping for here in camp is that he could show us he could play when we need him and that's really where we're at so, from that sense, it's been a successful camp."

Keefe noted that last season at this time Liljegren, a 22-year-old righty, was probably No. 9 or 10 on the depth chart.

Toronto's first round pick (17th overall) in 2017, Liljegren has a fan in new assistant coach Dean Chynoweth, who is working with the defence.

"That's been nice to see," said Keefe, "that a guy who is looking at it fresh believes in him and wants to have him around and part of things. If you're a young player, you're happy to have that, to have a coach on the back end that believes in you."

With Auston Matthews still sidelined, the Leafs will get a look at newcomer David Kampf in the top-line centre spot during their pre-season finale.

"Playing against other teams top guys is a role Kampf's going to be able to take on for us at different times so to put him in there makes sense," Keefe explained.

Kampf scored just one goal in 56 games last season with the Chicago Blackhawks so he may seem like an odd choice to play between Nick Ritchie and Mitch Marner, but Keefe sees some offensive upside in the 26-year-old.

"He's looking to take a step there and we're looking to help him in that process," Keefe said. "He's got a good skill-set. He can make a play. He gets the puck back and, because of how he defends, he gets the puck going offensively quite a bit."

Kampf has played on a line with fellow Czech native and good friend Ondrej Kase previously at camp and Keefe is already comfortable with the chemistry there.

Matthews, meanwhile, is listed as day-to-day as he works his way back from left wrist surgery and his status for Wednesday's regular season opener remains up in the air. As a result, Keefe is still tinkering with his forward group.

Another change tonight will see veteran Jason Spezza, who has played on the wing at camp, slide into the centre spot on the fourth line.

"Obviously, that's a big part of his versatility," Keefe said, "to be able to do that."

The Leafs are adopting a more aggressive penalty kill this season, which will require more energy from players and a deeper bench. So, more players are getting a shorthanded shot this pre-season, including William Nylander.

"I feel like he took big steps in his game last season in terms of his attention to detail defensively," Keefe explained. "And, really, just his play without the puck in general was consistently more competitive ... He's strong. He's quick. He's got good instincts. He's got a really good stick to pick off pucks and, of course, he's dangerous in transition. We've just seen growth in him and when we see growth in a player, we feel like his role has to grow as well."

Nylander has logged just six minutes and 51 seconds of shorthanded ice time in 358 career NHL games. He can't recall the last time he consistently killed penalties, but appreciates the opportunity to get a few extra shifts.

"I like it," Nylander said, "especially throughout some games when you get on the PK a bit and you're able to get out there and get moving versus sitting on the bench for an extended period of time."

Kase is also getting a look on the penalty kill despite having a limited track record in that role.

"Maybe there's injuries and you need guys," Keefe pointed out. "So, to have this opportunity to gain that confidence that they can do it and the coaches believe in them is a really healthy thing for our team."

Keefe added that Matthews, who got some shorthanded minutes early last season, would have also been in the mix for penalty-kill reps at camp had he been 100 per cent.

Campbell starts and will play the entire game
Mrazek