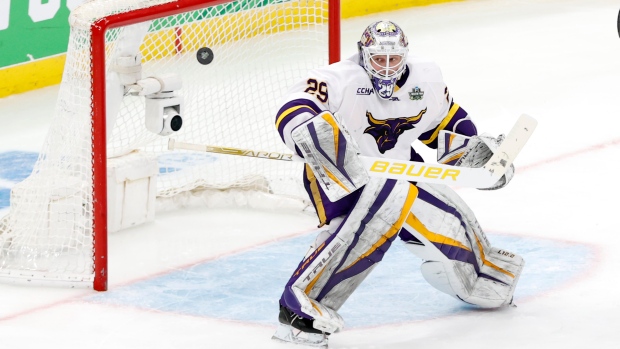 McKay is currently serving a six-month suspension for doping, announced by the  United States Anti-Doping Agency last week. He tested positive for ostarine, a prohibited substance, in January while serving as an alternate for Team USA's Olympic hockey roster.

Thank you to everyone in Mankato for an incredible 4 years! Memories and relationships that will last a lifetime. I will always be proud to be a Maverick. Excited for the next chapter with the @TorontoMarlies! https://t.co/WnDnTgQ1aS

The 24-year-old wrote on social media last week that he was "dealing with the consequence," so that he could start playing professionally in the fall, adding the “experience has been a very unexpected and difficult matter for me and my family.”

He will be eligible to voluntarily enter the organization’s facilities on August 25 and play for the Marlies on October 11.

McKay had a 38-5 record with Minnesota State, posting a .931 save percentage and a 1.31 goals-against average en route to reaching the Frozen Four national championship game.