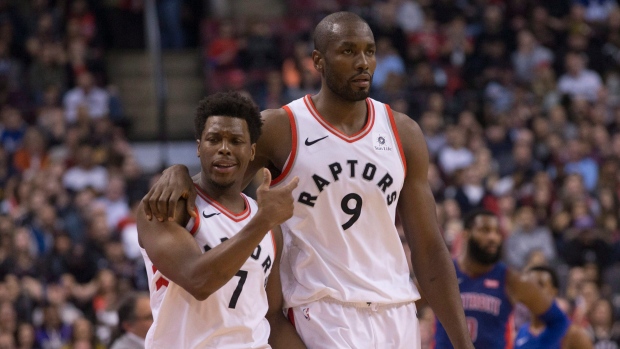 LOS ANGELES – It’s been a long time since the Toronto Raptors have had real questions or concerns about their depth.

In 2017-18 their vaunted “bench mob” was the NBA’s best second unit and the catalyst behind their 59-win season. Even after pushing their chips in to acquire Kawhi Leonard and Danny Green ahead of last season, and then Marc Gasol at the deadline, their depth allowed them to manage Leonard’s workload throughout the campaign and go 17-5 without their best player in the lineup.

Next man up – it’s been their mantra and one of the biggest reasons for their sustained success over the last half decade. Regardless of who’s come out of the game, went down with an injury, gotten traded or left in free agency, they’ve always been able to rely on the next player in line.

This year’s team has gotten off to a good start – they’re 6-2 through eight games – but it’s been in spite of their depth, not because of it. They’ve leaned heavily on the returnees with head coach Nick Nurse reluctant to trust the team’s new players or young guys. He doesn’t have much of a choice now.

Their already shaky depth will be tested without two of their most valuable and experienced players – Kyle Lowry and Serge Ibaka – going into one of the toughest stretches of their schedule.

Lowry suffered a small fracture to his left thumb while going for a rebound in the first quarter of Friday’s win in New Orleans. It’s the same thumb that he had surgery on over the summer, though the team says the two injuries are unrelated. He’ll miss at least two weeks and be re-evaluated from there.

Ibaka is out indefinitely with a badly sprained right ankle, which he also sustained in the first half of Friday’s game. He was in a walking boot and needed crutches to leave the arena. He’ll undergo additional tests in Los Angeles over the weekend.

Nurse went into the Pelicans game with seven trusted rotation players and he came out of it with just five. So where do they go from here?

Ibaka had gotten off to a great start to the season, playing some of the best basketball of his career, and was also the team’s only consistent source of offence coming off the bench.

In his absence, third-year big man Chris Boucher should inherit an expanded role. After winning G League MVP last season he was due for an opportunity at the next level, but this will be his first exposure to NBA rotation minutes and there’s some question as to whether or not he’s ready.

He looked good in the first half against New Orleans, changing the game with his energy and helping the Raptors take a big second-quarter lead, before fading a bit in the second half. That’s probably what we can expect from Boucher – ups and downs. He’s skilled but still very raw.

The Raptors also recalled rookie second-rounder Dewan Hernandez from his brief stint in the G League to give them some insurance at the centre position, though he’s unlikely to see meaningful minutes.

As for Lowry, his shoes are even tougher to fill. Despite Pascal Siakam’s continued ascension, Lowry is still Toronto’s most valuable and most irreplaceable player. Not only has he been fantastic to start the season – while leading the league in minutes and carrying a bigger workload with Leonard gone – but the team doesn’t have many options behind him.

By cutting Cameron Payne and Isaiah Taylor, who were both underwhelming in camp, the Raptors opted to fill their final roster spots with the players they felt earned their way onto the team instead of addressing their most pressing positional need. They have just two natural point guards on the 15-man roster – Lowry and Fred VanVleet, who is playing banged up after turning his ankle on opening night.

VanVleet already ranks second in the league in minutes per game, averaging 37.3, and will continue to get as much playing time as he can handle, with Norman Powell likely starting alongside him in the backcourt.

When VanVleet sits we could see Siakam run the point, as he did in the fourth quarter on Friday. Rookie Terence Davis is also capable of filling in, though he’s more comfortable playing off the ball. The Raptors had hoped Patrick McCaw could handle emergency third point guard duties this season, but he’s also out indefinitely after undergoing knee surgery last week.

The Raptors are in the midst of a brutal five-game West Coast road trip, which takes them to L.A. where they’ll reunite with Green and Leonard and face the Lakers and Clippers in a back-to-back starting Sunday, before visiting Portland and Dallas. If they’re going to survive this stretch undermanned they’ll have to get creative with the rotation and they’ll need at least a few underperforming or underutilized players to take advantage of this opportunity and step up.

They’ll need more from Powell and Marc Gasol, who have been inconsistent early in the season. They have to hope at least one of their young wings – Davis, Matt Thomas and Malcolm Miller – can solidify themselves in the rotation. They’ve also got to figure out where off-season additions Stanley Johnson and Rondae Hollis-Jefferson fit into their plans, if at all.

Johnson and Hollis-Jefferson appear to have fallen behind those younger wings and forwards on Toronto’s depth chart. It’s no secret that Nurse has been unimpressed with their play and effort level since training camp – he’s made that clear and has challenged them privately and publically on multiple occasions.

With a full roster, the Raptors would have to waive somebody if they decide they need help at the point guard position and want to add another player – perhaps Canadian Tyler Ennis, who is currently playing for their G League team.

Miller was the last player to earn a roster spot in camp, plays a position in which the Raptors have some depth, and makes the league minimum. While he seems like the obvious odd man out in the event they need to cut a player, could they decide it makes more sense to move on from Johnson or Hollis-Jefferson instead? It wouldn’t be a big surprise.

Unlike the past few years, the Raptors are far enough under the luxury tax threshold that they can cut a player without taking a significant cap hit. Traditionally, Nurse and Masai Ujiri have preferred to have younger players in those end-of-the-bench roles, instead of veterans that expect to be playing more and could become disgruntled.

Johnson and Hollis-Jefferson both fell out of favour with their previous teams and were hoping to get a fresh start in Toronto, where they saw an opportunity for playing time with Leonard and Green leaving in free agency. While it’s still early, things haven’t panned out the way either player – or the team – had envisioned when they signed over the summer.

Both players have been putting in extra time after practice to get caught up and Hollis-Jefferson is still nursing a groin injury. It’s certainly possible one or both players get an opportunity over these next few weeks and run with it. However, if the team decides they would prefer to go in a different direction with one of those spots, those guys might welcome the chance to find another team.

Don’t expect the Raptors to do anything drastic – a trade or a big signing. They may not do anything at all. They could play this out, at least for a couple games, to see what they have and if they can withstand this setback as currently constructed. Maybe Siakam and the emerging OG Anunoby continue to rise to the occasion. Maybe VanVleet can carry the load at point guard.

If you’re looking for silver linings, Lowry’s forced time off will give him a chance to bank some rest for later in the season. His absence, along with Ibaka’s, will give others a chance to play, develop and maybe emerge as rotation players. This could be a positive thing in the long run, but first they’ve got to tread water over the next few weeks.