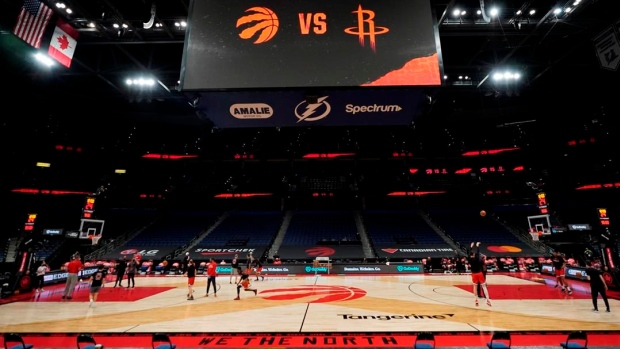 TORONTO – Earlier in the week, and just before the NBA released its schedule for the second half of the season, Raptors head coach Nick Nurse expressed his concern over the sheer volume of games headed his team’s way, while also making sure to knock on wood.

At the time, Toronto was one of just four teams that hadn’t missed a game due to postponement – meaning its remaining slate would be lighter than most – but with the league hoping to squeeze the rest of the campaign, play-in games and playoffs into a tight window, Nurse knew that these next few months were going to be hectic.

“I think that the schedule feels heavy,” he said ahead of last Tuesday’s contest. “This year already, it’s felt heavy and I think it’s going to be even heavier. I think we've been fortunate – let's hope we can get to this break without having any postponements or cancellations, but we've been fortunate.”

With just a few games to go before the upcoming all-star weekend, the Raptors had been fortunate, all things considered. Every team’s been impacted by the COVID-19 virus and the NBA’s health and safety protocols in some way, but Toronto nearly made it to the halfway point with minimal disruptions to its schedule – aside from the notable exception of having to move its operations across the continent and play its home games in Tampa, of course.

However, with a chaotic few days for the organization serving as yet another cruel reminder, in these times, things can change quickly.

On Sunday morning, the NBA announced that the contest between the Raptors and the Chicago Bulls – initially scheduled for later that evening – had been postponed. As a result of positive test results and ongoing contact tracing within the organization, Toronto would not have the league-required eight available players to proceed with the game, according to the league. This, coming two days after the team played Friday’s game – a 122-111 win over Houston – without Nurse, five members of his coaching staff, and Pascal Siakam, who were all unavailable due to the health and safety protocols.

Knowing what we know now, it’s fair to wonder whether that game should have taken place at all. In hindsight, the easy answer is, no, it should not have been played. But even without the benefit of hindsight, privately, there were at least a few people within the organization that expressed some trepidation about taking the court that night.

That wasn’t their call to make, though. It’s up to the league to determine if a game needs to be cancelled, and with enough players and personnel returning negative tests throughout the day, they felt comfortable giving both clubs the green light.

“One way to think about it is, we get tested twice in the morning, and so if those tests come back negative, that kind of gives you the clearance to participate in activities that day, and then you can even do some testing later in the day if you're concerned about it,” Raptors general manager Bobby Webster said ahead of Friday’s game. “Once the negative tests came back this afternoon, I think that gave the NBA the comfort that at least for today, we're clear.”

The question most people still have – not just as it pertains to the Raptors’ current situation – is, what goes into the contact tracing process?

According to sources, at least one of Toronto’s coaches tested positive ahead of Friday’s game, with the rest of the front-of-the-bench staff told to isolate from the team because they were considered close contacts. There was enough concern over Siakam’s status that he entered the protocol, as well. The Raptors did not play or practice on Thursday, but why weren’t the players or coaches that shared the court – or the locker room – with the aforementioned individuals in Miami on Wednesday also deemed to be close contacts?

Similar questions emanated from both the Raptors and Nets locker rooms after a game in Brooklyn earlier this month, when Kevin Durant was pulled from the starting lineup just prior to tip-off, allowed to enter the game in the first quarter, and then ruled out again in the second half – all in the name of contact tracing.

“You can probably imagine it's just the natural course of how groups work,” said Webster, who was asked about the protocol on Friday. “So, if your department or whatever group you’re with at work, if someone within that group had an exposure you go back and say who did you hang out with and who were you around the most? Who do you sit with on the plane? Who do you sit with on the bus?”

These incidents were unavoidable once the NBA and its players’ association decided to go forward with this season – playing basketball in the midst of a global pandemic and outside of a contained environment, like the Disney bubble that allowed them to finish the 2019-20 campaign safely. With teams travelling around the United States and playing in different markets, some of them in front of a limited numbers of fans, this was inevitable – players and staff were going to contract the virus and games were going to be lost.

Sunday’s game between the Raptors and Bulls was the 34th postponement of the season. It was the 30th time that a team could not dress the minimum required number of players.

Like just about everything else in basketball, in sports, or in life right now, this is a fluid situation. All of Toronto’s players and staff have been asked to quarantine at their respective homes in Tampa, only leaving to undergo testing a couple times per day. The league will monitor the results of those tests closely and determine what the next steps look like.

The Raptors have two more games scheduled before the all-star break – Tuesday against Detroit and Thursday in Boston. As of Sunday afternoon, no decision had been made in regards to those contests, but given the circumstances, it’s hard to see them being played.

Do the math. They have 17 players on the roster. Two of them, rookie Jalen Harris and recently signed big man Donta Hall, are on assignment in the G League bubble. Siakam was already in the protocol and had been ruled out, which means that at least seven other players have either returned positive tests or are in contact tracing. Then you factor in the coaching staff, which was down to four available members – including acting head coach Sergio Scariolo, who only avoided contact tracing because he had just cleared quarantine after returning from leading the Spanish National Team in FIBA qualifiers overseas – on Friday.

Postponed games are re-scheduled on a case-by-case basis. If there isn’t time to make up all of them, some teams could end up playing fewer than the planned 72 contests, according to recent reports. If the Raptors are in fact sidelined until after all-star, their next scheduled game would come against Atlanta on March 11 – ironically, the one-year anniversary of Rudy Gobert’s positive test bringing last season to a halt.

First and foremost, you hope that everybody within the organization is safe and doing well. When they’re healthy and able to get back on the court, you look forward to watching them play again. When will that be? That remains to be seen.​