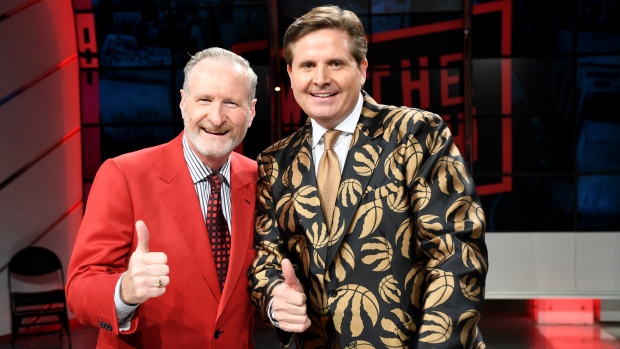 TORONTO – This Friday, the Toronto Raptors will get their first taste of fanless bubble basketball when they take on the Houston Rockets in a televised scrimmage from the NBA’s Disney campus in Orlando.

It’ll be their first opportunity to face another team – and our first chance to watch them live – since March 9, a couple days before the COVID-19 pandemic forced the league into a four-month hiatus.

The new normal will take some getting used to, but that doesn’t just apply to those on the court.

“It’ll be interesting,” said long-time Raptors analyst Jack Armstrong. He and the rest of Toronto’s broadcast team will be calling and producing games remotely for the duration of the 2019-20 campaign.

“There’s a reason why we’re doing it remotely,” said Matt Devlin, play-by-play voice of the team. “I think everybody understands why it’s appropriate, given the pandemic. We’ve had weekly calls, multiple calls, since March 9 and have been in communication with each other. So, we’re going to make the necessary adjustments and, as a broadcaster, I know all of us are going to do everything we can to provide the best broadcast possible to the fans.”

It’s a challenge that all 22 teams participating in the restart, and their broadcast crews, will have to contend with. In an effort to limit the amount of people on site, only the NBA’s two U.S. national broadcast partners – ESPN and TNT – were granted access into the bubble. Each local television and radio broadcast will be produced remotely, working off of a clean video feed provided to them by the league.

That means each network will be responsible for adding its own graphics, transitions and promos. It also means their on-air talent will have to call the action from a screen, in Toronto’s case, more than 2,000 kilometres away.

While the circumstances are less than ideal, the Raptors’ crew should be familiar with the process of calling games from afar. They’ve each worked on several FIBA telecasts over the years, covering Canada’s many international qualifying tournaments from a studio back home.

Devlin estimates that he’s called around 12 games remotely over his career, including his first professional broadcast – a contest between Australia and New Zealand for ESPN International in 1998. His most recent came in October, when the Raptors travelled to Tokyo, Japan for a pair of preseason games.

Assuming everything goes smoothly, most fans shouldn’t be able to notice the difference.

“When I was doing Canada games or any international games, or when we did the [Raptors’] Tokyo games, if we didn’t tell people we weren’t there 98 per cent of people have no idea,” said analyst Leo Rautins. “I remember [when] Canada was playing in Mexico and I’d go to dinner that night people were saying, ‘Hey, when did you get back?’ or ‘Are you going back tomorrow for the next game?’ Like, seriously, a lot of people don’t know.”

“I don’t have an issue with calling [games remotely], as long as we have a very visible big screen where you can see everything. I’ve done it so many times. So, for me, I just feel like I’m calling the game.”

Even when they’re live from the arena, Rautins estimates that they spend at least half of a regular broadcast looking at the monitors in front of them. Maybe they’re watching a replay. Maybe their view is being blocked by a player or a coach (or Drake, as Rautins joked). Devlin will go back and forth between the monitor and looking up at the court so that he can see – and go into detail about – what the viewers are seeing.

What they’ll miss most are the small nuances that you’re just not able to pick up on as easily without being in the centre of the action.

“When you’re there live calling a game, you have the ability to get a sense and a feel for everything that’s going on – when the officials are coming over to the table, what they are coming over to the table for. You have that ability to take your headset off and listen in on a conversation,” Devlin said. “How many times have we seen it over the years where Kyle Lowry will make his way over to our table to look at a replay of a close call? And so, all those elements where you’re able to get a little bit greater insight and then convey that, share that with the audience, that isn’t going to be there.”

Without being in the arena, they might not be able to see when an injured player limps to the bench or towards the locker room. They can’t bump into a scout or a coach before the game or at halftime for one of those brief but important behind-the-scenes conversations that provide added insight into the broadcast.

Instead, they’ll rely on the team to update them on injuries so they can relay that information to the audience. They’re hoping that the sit-down meeting they would get with Raptors head coach Nick Nurse before home games can now be done virtually. But how do they adjust their approach if they’re not there to pick up on all those small details?

“You’ve just got to be that much more dialled in and alert,” Armstrong said. “At least the games I’ve done in the past remotely had fans. Now, the game you’re calling has no fans, so it’s a challenge of being able to bring your mojo, bring your enthusiasm and your energy. You don’t want to be too keyed up but at the same time you don’t want to back off too much either.”

“I’m really excited. For your own personal development, you say it’s a new challenge, it’s a new opportunity to continue to grow and continue to get better as a broadcaster… In late October when I reflect on the experience, I hope I can say, hey, I’ve improved, these are a few areas that I’ve grown in as an analyst.”

The Raptors will play three scrimmage games – starting with Friday’s, airing on TSN – before re-opening the season against the Lakers on Aug. 1. TSN and Sportsnet will each televise half of the team’s eight seeding games leading up to the playoffs, which are scheduled to begin on Aug. 17.

Each game will be produced from a satellite studio in Oakville, Ont., with strict health and safety guidelines in place. Masks must be worn when entering and exiting the building, as well as in common areas. All staff must practice proper social distancing while in studio or working out of the production truck. On-air talent will be given their own personal headset, and all shared equipment will be sanitized frequently.

“Everybody’s taking all kinds of precautions,” said Rautins, who spent most of the pandemic at his home in Florida before flying back to Toronto and beginning his two-week quarantine last Wednesday. “Just like the NBA, we’re doing everything to make it as safe as possible.”

The award-winning tandem of Devlin and Armstrong will continue to front TSN’s broadcasts. Pre-game and halftime coverage will feature Rautins and host Rod Black in studio, as well as former Raptorshead coach Sam Mitchell via his home in Atlanta, and reports from Kate Beirness, Kayla Grey and me.

On radio, Paul Jones and Sherman Hamilton will have the call from the TSN 1050 studio, with pre-game and post-game shows hosted remotely.

“So much of this is a work in progress [in terms of] calling the games remotely,” Devlin said. “There will be adjustments made along the way because you have to remain fluid and flexible. All of those conversations have been going on for quite some time and I’m sure as we make our way towards Aug. 1, and then ultimately into the playoffs, we’ll have a better sense of what we’re able to do remotely because that’s really going to be, for us, the new norm.”

“I’m excited,” said Rautins. “I think the ratings are going to be crazy. People talk about what’s it going to be like for players playing without fans, but players also know that everybody in the world is going to be watching every one of these games. People have missed it.”

“I love the game,” Armstrong said. “I always tell people I can’t thank that orange ball enough. I started playing basketball as a kid when I was seven years old and here I am, I’m 57 now, I’ve had 50 years with that ball, and I can’t thank that orange ball enough. I love that ball and I love the game. So, to be able to be part of it and call games and chat about the sport I love is a true blessing and I’m really fortunate. I’m pumped up about it and maybe it takes peoples’ minds, for a few minutes, off of the challenges that we’re all going through.”