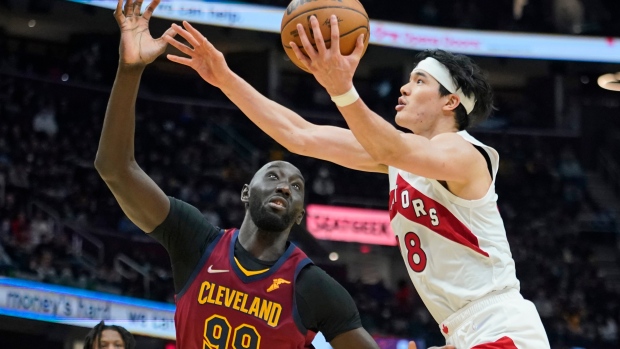 It was a quick and quiet flight, with only a bare-bones crew of players, coaches and staff on board, roughly half the size of their regular travelling party. The team – or whatever was left of it – was en route to Cleveland for Sunday’s scheduled contest against the Cavaliers, a game they weren’t sure would even be played.

In order to play, the NBA requires teams to have a minimum of eight players available and in uniform. With 10 guys in the league’s COVID protocols and isolating at home, two-way guard David Johnson still nursing a calf injury, and point guard Goran Dragic back in Slovenia, the Raptors had four players on that plane.

“[We’re] playing box and none tomorrow,” a member of the organization joked, via text, shortly after landing. “Got a box. Waiting for one more.”

The plan was for four G Leaguers to meet them in Cleveland, clear COVID screening and sign hardship 10-day contracts in time to join the club ahead of tip-off, but in the middle of a global pandemic and league-wide outbreak, even the best-laid plans can go awry, as the Raptors have learned firsthand.

Last week, they travelled to Chicago, only for OG Anunoby and two replacement players to test positive hours before Wednesday’s game against the Bulls, which was eventually postponed. You can’t blame them for being skeptical.

However, when eight players returned eight negative tests at 2:00 P.M. on Boxing Day, Raptors-Cavaliers was officially a go.

The Raptors would not have their five leading scorers, or seven of their top-nine players in minutes logged. None of their starters were available. Instead, they would dress four regular reserves – Chris Boucher, Dalano Banton, Yuta Watanabe and Svi Mykhailiuk – as well as four newly signed players, D.J. Wilson, Tremont Waters, Juwan Morgan and Daniel Oturu.

The result was more or less what you would have expected. The Raptors fell to the Cavaliers by a score of 144-99. It was the third-most points the Raptors have ever surrendered in a game and was one point away from matching the largest margin of defeat in franchise history, a 125-79 loss in New York against the Knicks during the club’s 1995-96 inaugural campaign.

The Cavs also had seven players in the protocols and were missing four starters. Still, Darius Garland (22 points) and Lauri Markkanen (20 points) were a few levels above the competition, and veteran Kevin Love, who scored 22 points in 18 minutes, came in with more games of NBA experience under his belt (762) than Toronto’s entire active roster combined (750). The 8.5 points spread, in favour of the home team, was generous.

It wasn’t for a lack of effort. The regulars had a few standout moments, most notably Watanabe, who took 20 shots – nearly doubling his previous career-high – and scored a personal-best 26 points in 37 minutes. The new guys did their best to mask an obvious, albeit justifiable, lack of familiarity with hard play. But if they looked like a group of players that had just met, it’s because they were a group of players that had literally just met.

At 4:45 P.M., 75 minutes prior to tip-off, Nurse and the small handful of assistant coaches on the trip held a short pre-game walkthrough. It was the first time that those eight players shared the court, any court.

“We met [the four new guys] on the bus on the way to the arena,” said Watanabe. “And so when we got here we went through a couple of plays. Usually in the meeting right before the game we watch the other team’s clips, but Coach showed us our clips.”

“[We went] over the basic concepts and sets on offence, the three, four basic sets that we’ll probably be flowing into over the 48 minutes, and then on the other end just [went] over the defensive concepts” said Wilson, who recorded 15 points, eight rebounds and four assists in 34 minutes, getting the start in his first game with the Raptors. “And then more than anything what was vocalized was just go out there and play as hard as you can, have fun. I think we did that. I think for us playing for the first time, I think we did alright.”

Nurse was a bit more familiar with Wilson and Waters, having coached against them when they were with the Bucks and Celtics, respectively. But he met Morgan and Oturu when the other guys did, moments before the game.

The Raptors’ head coach spent the last few days brushing up on his new players by watching film from their previous NBA and G League stops. Meanwhile, Cleveland was also studying up on the four new Toronto players in the lead up to Sunday, according to Cavs coach J.B. Bickerstaff. With all of the uncertainty around the league, between the protocols and the replacement players, game planning has never been more complicated. You can’t be sure who will be on the floor when the ball goes up, for your team or the opposition.

“It’s the unknown, to be honest with you,” said Bickerstaff, who was rewarded for Cleveland’s unexpected 20-13 start to the season with a contract extension over Christmas. “You literally test in the morning and then all day long you’re just waiting to figure out if this guy is going to be in, if he’s going to be out, if he’s cleared the protocols. And then you could be hit with the last minute [news that] this guy’s out. So I think that’s the difficult part… When you’re going through the testing it’s almost like you’re just waiting for the bomb to drop on who’s next.”

“It seems like everybody’s been quarantining properly and doing what they need to do and some tests are just popping up positive one way or another,” Wilson said. “It’s kind of nerve wracking, but I have faith.”

Wilson’s had a week to remember. The 25-year-old and former 17th-overall pick has spent the season playing for the Thunder’s G League affiliate in Oklahoma City. He was in Las Vegas for the G League showcase when he got the call from Toronto. After travelling to Chicago for last Wednesday’s game, which was postponed, he spent Christmas with his family in Los Angeles, and then met his new team in Cleveland.

“It’s been an eventful four or five days,” Wilson said. “But I’m appreciative for the opportunity and I wouldn’t pass up on it.”

Such is life for a player on the fringes of the NBA, hoping to find and take advantage of an opportunity. There’s no shortage of opportunity right now.

More than 200 players have entered the NBA’s COVID protocols this season, with 187 of them being added this month, as the Omicron variant tears its way through the league.

The Raptors are among the teams to get hit the hardest. Less than an hour before their December 18th win over the Golden State Warriors, Pascal Siakam and Banton became the first Toronto players to enter the health and safety protocols. Since then, nine have joined them: Gary Trent Jr., Fred VanVleet, Malachi Flynn, Scottie Barnes, Precious Achiuwa, Anunoby, Khem Birch, Justin Champagnie and Isaac Bongo. Only Banton (who logged 23 minutes on Sunday, his first five-on-five action in nearly two weeks) has been cleared to return.

League officials, including commissioner Adam Silver, have made it clear that there are currently no plans to pause the season. They’ve also been reluctant to reschedule games. If a team can piece together a roster of eight abled and healthy bodies, even if it has to scramble to find half of them, that team is expected to play. Quality of the product be damned, in some cases. We’re seeing it more and more around the league, though this latest Raptors game was an extreme example.

Credit Nurse and his coaches for doing what they could with a makeshift roster. Commend those players for coming together in these unusual circumstances and putting themselves at risk, all of it in the name of chasing their NBA dreams. Still, what we saw in Cleveland on Sunday wasn’t NBA basketball. Not even close.

“I think for me, I’m always trying to be part of the solution,” said Nurse. “We got a big problem here, not just [in] basketball. We’ve got a big problem. Leaders make decisions and you try to ride with them, be positive and go do your job. And, okay, we had to take a pretty good loss tonight, but we’ll bounce back, we’ll be okay.”

Fortunately, all the Raptors players that have tested positive this month are either asymptomatic or experiencing only minor symptoms, according to team sources. Consider that a victory for the vaccines – each player has at least two doses, and some have received their boosters.

Players who test positive are required to self-isolate for at least 10 days – though the league is reportedly in the process of shortening that timeline – or until they return two negative tests 24 hours apart. Nurse is expecting to get some, if not most, of his guys back as this week progresses, perhaps as early as Tuesday when they host the Philadelphia 76ers.

The hope is that the transition back will be a lot smoother than it was after last year’s outbreak, when players – including Siakam and VanVleet – were hit much harder by the virus, and needed weeks, or in some cases months, to get their conditioning level up again.

“We’ve got to figure out what the group is for the next game, whatever that group is,” Nurse said. “If there’s no additions, we’ve got to get this group better. Certainly, defensively, we’ve got to figure something out where we can put up more of a stand there. And if guys trickle back in, we'll trickle them in as we go. But nothing really changes. Whatever we got, we try to get better and we gotta fight.”