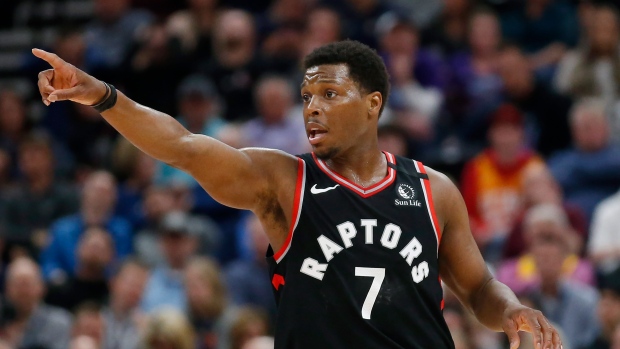 TORONTO – There were 22.5 seconds left on the clock as Deron Williams stepped to the free- throw line in Game 7 of the thrilling opening-round playoff series between the Brooklyn Nets and Toronto Raptors back in 2014.

Scotiabank Arena – formerly known as the Air Canada Centre – had already seen its share of special moments, and it’s certainly been the site of a few since then, but those who were in the building that day will tell you they’ve never seen or heard it like that.

With a two-point lead and a chance to ice the game and the series for Brooklyn, Williams stared into a seemingly endless sea of red and white – more than 20,000 Raptors fans standing, screaming and stomping, desperately trying to will the ball out of the basket.

The foundation shook and the noise was deafening. When Williams missed the first shot, the building erupted.

That’s just one of the lasting images from an iconic and franchise-altering few weeks. Masai Ujiri’s “F--- Brooklyn” in Jurassic Park ahead of Game 1 and the subsequent fine from the NBA, Dwane Casey riding the subway on the way to the arena, and Terrence Ross’ Game 7 steal. Then there was the way it ended – Kyle Lowry, who’s buzzer-beating floater had just been blocked by Paul Pierce, laying under the basket while his friend and teammate DeMar DeRozan consoled him.

Brooklyn had won the battle, but Toronto won the war.

The Nets, who were built to compete for championships, lost in the second round that year. They haven’t won a playoff series – or more than 42 games in a season – since.

The Raptors have won eight postseason series, including an NBA title. They’ve qualified for the playoffs in each of the past seven years, and after failing to win 50 games during the first two decades of their existence, they’ve reached that plateau five seasons in a row – the longest active streak in the league.

Their remarkable and unexpected mid-season turnaround in 2013-14 sparked the most successful run in franchise history, and the “We the North” era was born in that series with Brooklyn – literally in the case of the team’s popular marketing campaign and rallying cry, which was launched a few days before Game 1.

“It was thrilling at that time for the Raptors to even be in that position,” said Nick Nurse, who was in his first season as an assistant with Toronto that year. “I don’t think anybody saw it coming. And the excitement. Man, was it something. The roar of the crowd in Game 1 was amazing for our home fans and fan base. To be there for the first year, that was my first year there, it was something cool, for sure.”

Six years later, the Raptors have come full circle as they prepare to open the postseason against a familiar – and fitting – first-round opponent: the Nets. Both teams look and feel a lot different this time.

For Toronto, it hasn’t exactly been a linear rise. There have been setbacks and casualties along the way. They were swept out of the playoffs three times in four years. Casey was let go. DeRozan was traded. But even as the personnel changed, their on- and off-court identity mostly remained the same, and it manifested itself in that first series against Brooklyn.

Everything seemed new and exciting back then – for the players, the team and its fans. It’s why there was such a buzz in the building and around the city for a first-round series.

The organization hadn’t made the playoffs in six years, and didn’t expect to that season. Three of the starters were making their postseason debuts, while the other two came in with just 24 games of playoff experience under their belts. The Nets’ starters – Williams, Pierce, Kevin Garnett, Joe Johnson and Shaun Livingston – had 447.

The Raptors were actually the higher seed, but given their youth and Brooklyn’s championship pedigree, few picked them to win. That’s when Toronto truly embraced the idea of being the plucky underdogs. We the North. It fit the makeup of the team and resonated with the city and the fans.

Even in defeat, the experience of gutting out a hard-fought seven-game series against a tough veteran opponent helped prepare them for what they would become.

“[It meant] everything,” Lowry said of that 2014 series. He’s the only current Raptors player that appeared in it.

“It motivated me to great, to be better, to understand the situations that I want to be in and how to be successful in them.”

Lowry was 27 at the time. He was still learning what it meant to be a leader and only starting to scratch the surface of what he would blossom into as a player. He hadn’t made his first all-star team yet.

Now, he’s a six-time all-star, an Olympic gold medallist, an NBA champion and arguably the greatest Raptor ever. A lot has changed in six years, but with a game or a series on the line, they still want the ball in the hands of No. 7.

The roles are reversed for the rematch. The Raptors’ starters have appeared in 252 career playoff contests, and all five of them own a championship ring. The active roster has 493 games of playoff experience. Brooklyn’s has 149 games – 74 belonging to Jamal Crawford, who might not even play – and the Nets starters only have 51. They’re the kids. They’re the plucky underdogs with something to prove but nothing to lose.

This is the matchup that most teams wanted entering the restart. The Nets came to Disney without six rotation players. Kevin Durant and Kyrie Irving won’t return from their injuries until next season, while Spencer Dinwiddie, Wilson Chandler, DeAndre Jordan and Taurean Prince all opted out. They filled their roster with G League standouts, unclaimed veterans and whomever else they could find on short notice, so most people wrote them off.

But they may be a tougher out than people thought. Outside of the undefeated Phoenix Suns, Brooklyn has been the biggest surprise of the bubble, going 5-3 with wins over the Bucks and Clippers. On Thursday, they nearly ended Portland’s season, despite having nothing tangible on the line.

They remind you a lot of those 2013-14 Raptors that nobody saw coming. They play extremely hard. Without an established the star on the floor – although Caris LeVert is certainly blossoming into one – they share the ball and play together. If anybody should know how dangerous the plucky underdogs could be, it’s Toronto.

“I think they're obviously one of the big surprises of the restart,” Nurse said. “LeVert's outstanding. They're really playing with a lot of confidence. They're playing fast, Coach [Jacque] Vaughn has obviously got 'em dialled in, and I think there's a lot of opportunity there for some guys that are pretty good players.

“You've got an up and coming guy in LeVert that's a super, super scorer and player. You've got [some] veteran players around them, Garrett Temple and even Jamal Crawford, in their locker room. Even though he hasn't played much, it’s still nice to have some vets around the team. They've got a lot of guys who are playing with a lot of energy and a lot of confidence right now. They certainly earned and deserve this playoff berth and we will respect them, for sure. We will have to prepare and play really well to beat them.”

It’s not just the teams that have changed in six years, so have the expectations. The Raptors aren’t just happy to be there anymore, and merely getting past Brooklyn is no longer good enough. The goal will be to advance in four or five games – they’ve been on the losing side of four series sweeps in franchise history, but never on the winning side.

The Nets won’t go down without a fight, they’ve made that clear, and that’s a good thing – the Raptors need and probably want to be pushed. It’s not an easy matchup but it’s a more favourable one than fifth-place Indiana (who will face Miami) or sixth-place Philadelphia (who will face Boston) would have been.

With the Celtics – Toronto’s likely second-round opponent – going toe-to-toe with the talented, albeit depleted 76ers in a series that could conceivably go the distance, the hope is that the Raptors can take advantage of their matchup and have a few extra days to prepare for what comes next.​