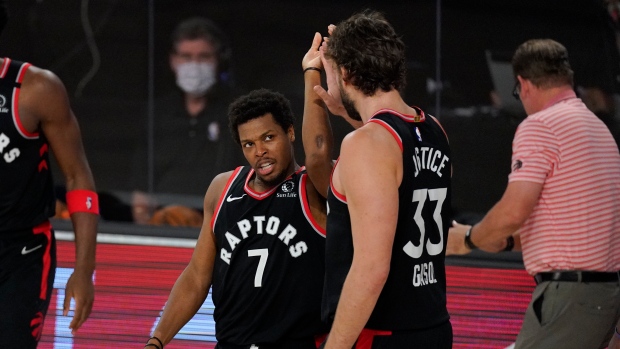 TORONTO – As the Toronto Raptors returned to Disney’s Gran Destino Tower on Saturday night, likely exhausted but able to breath a sigh of relief for the first time in a week, the Milwaukee Bucks were in their rooms just a few floors away at the very same hotel, having an existential crisis.

The Bucks came into the postseason with the NBA’s best record, the soon-to-be two-time MVP, and championship expectations. Now, they’re dead men walking.

After coughing up a 2-0 lead and losing four straight games to the Raptors in the Conference Finals last May, they told themselves this year would be different. And it will be. They won’t even make it that far.

Just 24 hours earlier, Milwaukee fell behind 0-3 in its second-round series with Miami. They’ll tell themselves that they can survive this, that if anybody can do it it’s them, but they know how this ends, and the end is coming soon. No team has ever come back from a 3-0 playoff series deficit, and considering their head coach continues to manage must-win games like they’re regular season contests, don’t count on them being the first.

With their season – and perhaps the future of the franchise – on the line, Mike Budenholzer played Giannis Antetokounmpo 36 minutes in Friday’s 115-100 Game 3 loss to the Heat. Khris Middleton, the team’s second all-star, logged 36. There are other reasons why the Bucks are in this hole, to be sure – Jimmy Butler and the Heat are really good, and they’ve taken a page out of Toronto’s book in terms of defending Antetokounmpo.

Still, desperate times should call for desperate measures, shouldn’t they?

“It’s a high level,” Budenholzer said following Game 3. “If you’re going as hard as these guys are in a playoff game, 35-36 [minutes], I think that’s pushing the ceiling.”

The second-seeded Raptors have a different philosophy, and it’s helped produce a different result. Like Milwaukee, Toronto was down 0-2 in its series with Boston. In Thursday’s must-win Game 3, head coach Nick Nurse tightened his rotation and predominately used seven players (the eighth man, Matt Thomas, only logged six minutes).

Kyle Lowry played just over 46 minutes, all but 91 seconds of the contest, and his team needed every one of them to pull out a thrilling 104-103 victory – punctuated by OG Anunoby’s game-winning buzzer beater, which was set up by Lowry’s brilliant inbounds pass with a half-second left on the clock.

With new life and some momentum – if you believe momentum exists in the playoffs – going into Saturday’s Game 4, Nurse and the Raptors didn’t let up. They put together their most complete effort of the second round – aided by some positive three-point shooting regression – and evened the series up with Boston at two games apiece. Once more, they leaned on their best players to do the heavy lifting.

The veteran point guard finished with 22 points, 11 rebounds, seven assists, two steals and two blocks – an impressive stat line, but one that doesn’t even tell the full story. As usual, Lowry threw his body around all night, drawing a couple painful looking charges and then diving out of bounds to try and secure a loose ball late in the game. In the process, Lowry appeared to throw the ball off of Jayson Tatum, which was the initial call. Although it would get overturned, the video review – triggered by a Brad Stevens coach’s challenge – actually bought him a few minutes of rest at a crucial point in the game.

“I did check with [Lowry],” Nurse said, following Toronto’s 100-93 win. “A couple times I was just joking. I asked him if he needed a sub with a smile and he chewed me out, like ‘No, I don’t need one’ and I was like, “I know, I was kinda kidding’. But we do check and ask them and tell them we’ve got some timeouts if they need a rest. You probably saw us take one with 3:50 to go there. We had one to burn, it felt like it was just a rest timeout. And I thought we got a really, really big boost with the challenge. That was a big, big point – we were playing, it was frantic, so that was another big resting point for our guys.”

Throughout the regular season, the depth of the Raptors’ bench proved to be a pleasant surprise. Just about everybody on the roster stepped up at one point or another and helped the team overcome a constant barrage of injuries to its top-seven players.

However, that’s what depth is for – to get you here, to help put you in this position. You spend all season preparing for this moment – managing the minutes of your best players, which the Raptors were able to do as a by-product of all the injuries, and the Bucks did by blowing teams out. Now, this is when your stars are supposed to shine brightest and carry you further.

“I mean, if you’re ever going to do it now’s the time to do it,” said VanVleet, who scored 17 points on Saturday. “There’s nothing to be resting for, there’s no tomorrow. Coach is putting his trust in us and communicating to a level where if you need a rest you get one, if you need him to call a timeout you get one. But right now, I think he’s rolling with the big guns and that’s the way that we like it.”

Lowry’s logged 90 minutes over the past two games, despite spraining his ankle in the final game of the first-round sweep over Brooklyn – he was questionable heading into the opener against Boston. He’s 34-years-old. Antetokounmpo, who is also dealing with an ankle sprain, is 25.

Less than seven per cent of the teams to ever lose the first two games of a best-of-seven playoff series have come back to win that series. The Raptors were the last ones to do it, when they sent Milwaukee packing last year, and now they’ve got a chance to do it again.

They’ve emptied the tank and willed themselves to a couple of season-saving wins. Now, it’s a brand new series, a best-of-three, and the Celtics are the team doing the soul searching going into Monday’s Game 5.

Meanwhile, the Bucks are about to get plenty of rest.

“I’m just trying to do what I gotta do in the moment,” Nurse said on the eve of Game 4. “I’m not sure I went into [Game 3] thinking I wasn’t going to make any subs [in the second half]. The season was on line, and I’m coaching that way.”​