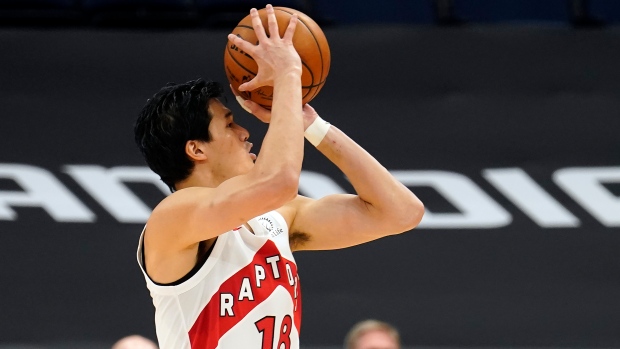 Toronto Raptors forward Yuta Watanabe has been added to the injury report and listed as questionable for Friday’s game against the Indiana Pacers.

Watanabe, 27, played his first game of the 2021-22 season on Wednesday against the Memphis Grizzlies, scoring three points and grabbing three rebounds in 14 minutes.

Prior to Wednesday, Watanabe had not played this season due to a calf strain sustained during the pre-season. The Raptors continue to manage that injury.

Watanabe averaged 4.4 points and 3.2 rebounds in 50 games with the Raptors last season.

Forward OG Anunoby remains questionable and centre Khem Birch will be out for Friday’s game.

Anunoby, 24, missed the Raptors’ past four games due to a hip pointer injury sustained during a 118-113 loss to the Portland Trail Blazers on Nov. 15.

Birch, 29, missed Wednesday’s 126-133 victory over the Grizzlies due to right knee swelling.

A native of Montreal, Birch has played in 15 games so far this season and is averaging 6.9 points and 5.7 rebounds.