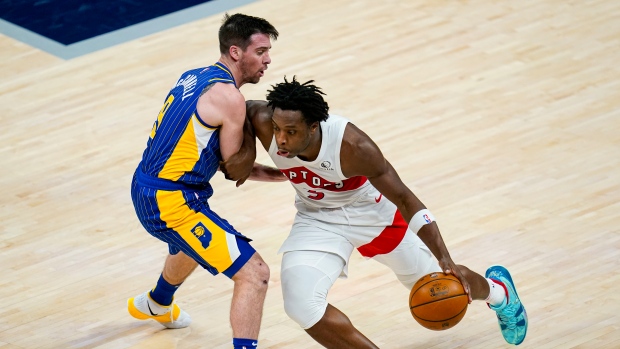 Toronto Raptors forward OG Anunoby, who has been battling a calf strain, is currently listed as day-to-day.

OG Anunoby is day-to-day. Nick Nurse says he's feeling a bit better today and they'll see how he's doing tomorrow before making a call on his availability vs Kings. Sounds like he's questionable. Nurse also said Pat McCaw was able to do some non-contact drills in practice today.

The injury caused Anunoby to sit out the team's loss on Wednesday to the Milwaukee Bucks. Raptors head coach Nick Nurse said on Thursday that Anunoby is feeling a bit better but the team will wait until Friday to decide on his availability that day for their game against the Sacramento Kings.

Anunoby, 23, has averaged both career highs in points (14.6) and rebounds (5.8) this season. In December, the Raptors signed the forward to a reported four-year, $72 million contract extension.

Nurse also said that guard Patrick McCaw, who has not played at all this season after undergoing surgery to remove a mass from his knee in August, was able to do some non-contact drills in practice on Thursday.