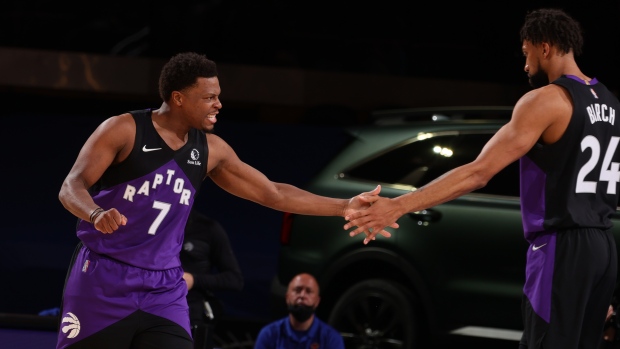 TORONTO – It pays to play with Kyle Lowry. Just ask some of the big men that have been fortunate enough to call him a teammate over his nine seasons with the Toronto Raptors.

In 2015, Amir Johnson and Jonas Valanciunas signed the richest contracts of their careers. Valanciunas agreed to a four-year, $64 million extension with Toronto, while Johnson went to Boston for $24 million over two seasons. Both had spent the previous three years running the pick and roll with Lowry.

Serge Ibaka, who got $65 million to stay with Toronto back in 2017, had his best seasons as a pro playing alongside Lowry. Meanwhile, the veteran’s fingerprints are all over the development of Pascal Siakam, who earned a maximum contract extension worth upwards up $130 million in the summer of 2019.

Whether he was setting Ibaka up for open mid-range jumpers in the pick and pop, tossing alley-oops to long and athletic backup centre Lucas Nogueira, or pitching the ball ahead to a young Siakam in transition, Lowry has always had a unique ability to build quick chemistry with his bigs.

So, it should come as no surprise that after sharing the court for just four games, Lowry and the newest member of the team, Canadian centre Khem Birch, look like they’ve been playing together for years.

“This is the easiest 14 points I’ve ever had in my career,” Birch said on the team broadcast following the Raptors’ 112-96 win over Cleveland on Monday.

“Kyle told me the first game [we played together] against the Knicks [on April 11] that the perception of him might be that he likes to score but he’s a pass first guy. So ever since he told me that I know he’s always looking for me.”

Lowry, who finished with nine points and 10 dimes, assisted on five of Birch’s seven field goals. Midway though the opening quarter, he rewarded the mobile big for getting out on the break, setting him up for an easy bucket in transition. Later in the half, he gave up an open three-pointer to find the cutting Birch for an open dunk. In the third, Birch set a screen for his point guard, rolled hard to the basket, caught Lowry’s lob pass on the move and banked in a layup to complete the play.

It was the second time that Birch had matched his career-high in scoring since he was waived by the Magic and signed with Toronto less than three weeks ago. In eight games as a Raptor, the 28-year-old is averaging 9.4 points and 6.3 rebounds in nearly 27 minutes per contest after averaging 4.7 points and 4.4 rebounds and 16 minutes in three and a half seasons with Orlando.

He’s made a strong impression on his new team, and a timely one at that. He’ll be an unrestricted free agent this summer.

“I’m trying to get him paid,” Lowry said after Monday’s game. “That’s what I try to do, I try to get my teammates paid and help us win games and make sure everyone around me is successful. I think he is a talented kid and he has this opportunity where he can be successful so why not try to make him be successful?”

If Lowry seems excited by the idea of having a new big to collaborate with, it’s because he is. Since Ibaka and Marc Gasol left in free agency last fall, he hasn’t had that trusted pick and roll partner.

Back in training camp, Lowry vowed that newly signed veteran centre Aron Baynes would have a career year playing next to him. To say that hasn’t gone according to plan would be an understatement. Given Lowry’s track record of bringing out the best in his teammates, it’s strange that they could never get on the same page, but also speaks to what a poor fit Baynes has been in this system. He would bobble passes from Lowry and the team’s other guards or struggle to finish plays until ultimately falling out of Nick Nurse’s rotation following the additions of Birch and Freddie Gillespie.

In 525 minutes with Lowry and Baynes on the court together this season, the Raptors have been outscored by 66 points. Meanwhile, the team is plus-37 in the 91 minutes that Lowry and Birch have played together.

Like the other big men Lowry has had success with over the years, Birch checks off a few important boxes.

“The willingness to roll and be in the right spots, the willingness to understand that I am looking for them,” said the 35-year-old point guard. “Me and Serge, we had an unbelievable thing between us. And Lucas, and really all the bigs I have played with, I just try to figure them out. They don’t have to figure me out, I figure them out. I am the one that has to make the right play, but the willingness to roll, to pop, to understand where I need them [to be], to screen and to do their job is the most important thing.”

Thanks to injuries, rest nights, a mid-season COVID-19 outbreak and the underperforming centres, among other factors, the Raptors have tied a franchise record – initially set during their inaugural 1995-96 campaign – by using 28 different starting lineups this year. Finally, they seem to have settled on one they like.

For the first time since early March, Nurse has opened three straight games with the same unit; Lowry, Fred VanVleet, OG Anunoby, Siakam and Birch. That group has outscored opponents by 41 points in 71 minutes over that span.

How long they stick with it will be telling in terms of their plan for the stretch run. With Monday’s victory and the Washington Wizards’ overtime loss to the San Antonio Spurs, which snapped an eight-game winning streak, Toronto and Chicago are both one game behind Washington for 10th place and the final spot in the East’s play-in tournament.

The biggest obstacle for the Raptors is their remaining schedule. Eight of their final 11 games come against teams that are currently above .500. Going into Monday’s contests, the combined winning percentage of those final 11 opponents was .588. The only team with a tougher slate is the Spurs (.612).

However, it’s not just the quality of competition that makes Toronto’s schedule so daunting. They play five games this week, including a pair of back-to-back sets and the start of a brutal West Coast road trip that will see them visit the Denver Nuggets, Utah Jazz, Los Angeles Lakers and Los Angeles Clippers in the span of six days.

Their best and likely only chance at making a run and salvaging the season hinges on the hope that this budding chemistry between Lowry, Birch and the rest of their new starting five continues to grow.