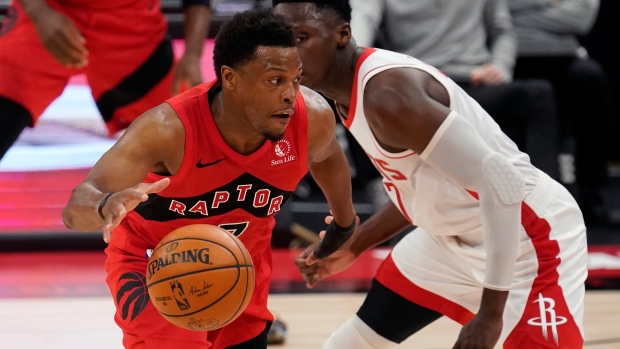 Pending unrestricted free agent Kyle Lowry said Tuesday he's not sure what his future holds with the Toronto Raptors, but made it clear he doesn't believe his playing career is nearing an end.

The 35-year-old is set to hit the open market this summer after spending the past nine seasons with the Raptors. He said Tuesday that family, money and term will be the top factors in his free agency decision.

"To be honest with you, my family will be a major factor in this, Lowry said. "And also money talks and years talk, let's be real... I still have a lot more to give. I have a ton of basketball left in me."

A six-time NBA All-Star in his nine seasons with the Raptors, Lowry said he would "love" to continue his career with the team.

"We'll see what happens. Of course, Toronto is always going to be home," Lowry told reporters. "It's a situation I would love to be in and if it works out it works out. If not then we make choices on what's best for myself and my family."

Lowry: "We'll see what happens. Of course, Toronto is always going to be home. It's a situation I would love to be in and if it works out it works out. If not then we make choices on what's best for myself and my family."

He noted, however, that his future could be tied to whether Masai Ujiri re-signs with the Raptors, with the team president's contract also set to expire this summer.

"I told him part of the reason I'm still here is because of him," Lowry said of Ujiri. "So his decision will factor into (my decision). I want him to get what he deserves. He's the best out there... He will get his payday and it's well deserved and well earned."

A key player in the Raptors 2019 NBA Championship, Lowry said contending for another title is important to him.

"I want more championships," Lowry said. "That's always been the goal. Money comes with that but championships are why I play."

Lowry, who averaged 17.2 points, 7.3 assists and 5.4 rebounds per game in 46 contests this season. opted not to ask for a trade at the deadline this season despite the Raptors sitting on the playoff bubble.

"I made a commitment," Lowry said of that decision. "I started the season off and said I wanted to be with these guys... I'm a man of my word. And I trust the decision making of (general manager Bobby Webster) and Masai and they decided not to do it. There was open communication.

"I'm not that guy. I said something in January and I stuck with it. Those guys had the final decision and they made the call not to (trade me). I roll with what they've done the last 8 years. I mean I haven't been happy about all the things they've done but I roll with it."

A veteran of 15 seasons with the Raptors, Houston Rockets and Memphis Grizzlies, Lowry sits fifth among active players in assists and 14th in games played at 960.

Lowry just finished speaking to the media for 45 minutes. He said he wanted to hold the longest player press conference in franchise history. Add another record to his Raptors resume. GROAT.