Sitting just outside of the playoff picture, the Toronto Raptors host the Cleveland Cavaliers on Monday, needing a victory to keep pace with the red-hot Washington Wizards for the final spot in the Eastern Conference play-in tournament.

The Raptors saw their four-game winning streak come to an end on Saturday when they dropped a 120-103 game to the New York Knicks at Madison Square Garden.

Fred VanVleet paced the Raptors offensively with 27 points, 11 assists and five rebounds in the losing cause.

OG Anunoby also had 27 points and five rebounds against the Knicks, who ran their winning streak to nine with the victory.

“The other night was our first step kind of back and we did show some flashes at the end that we're not that far away,” head coach Nick Nurse said after the loss to the Knicks. “But I think we’re going to need to grow in these next 12 games and if we do, then I think we’re hard to beat.”

Chris Boucher, who suffered a sprained MCL in his left knee last Wednesday, missed Saturday’s loss and is expected to remain out at least for the remainder of the home stand, which concludes on Tuesday against the Brooklyn Nets.

On Monday, the Raptors announced that Gary Trent Jr. will also miss the game against the Cavaliers with a lower left leg contusion.

The Cavaliers have lost their past two games, including a 119-110 defeat to the Wizards on Sunday.

The Raptors (25-35) enter play tied with the Chicago Bulls for 11th place, two games behind the Wizards for the final playoff position in the Eastern Conference.

The Bulls own the tiebreaker over the Raptors after capturing their first two meetings of the season.

Washington (27-33), winners of eight straight games, will host the San Antonio Spurs on Monday, while the Bulls will be on the road against the Miami Heat. 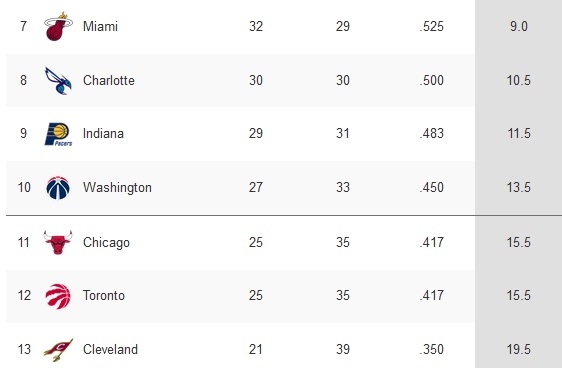 After completing their home stand on Tuesday, the Raptors will head west for a tough four-game road trip that will see them face the Denver Nuggets, Utah Jazz, Los Angeles Lakers and Los Angeles Clippers.