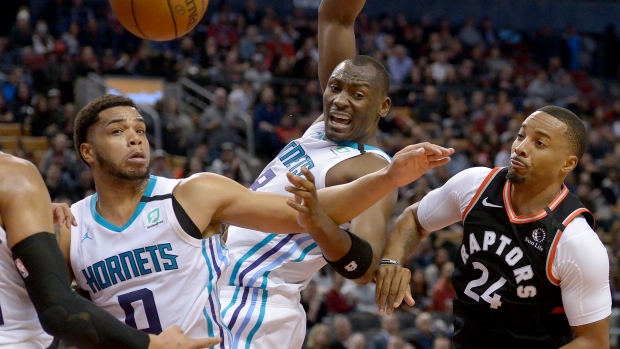 TORONTO — The Toronto Raptors have managed to win through a litany of injuries this season. But on Friday night, the key absences caught up with them.

Terry Rozier scored 18 points and the go-ahead free throw with 2.1 seconds remaining to lift the Charlotte Hornets to a 99-96 win over the Toronto Raptors on Friday, spoiling a solid return by Norm Powell.

But while Powell returned from a nine-game injury layoff to score 22 points, the Raptors were without Fred VanVleet (sore shoulder) and both centres: Serge Ibaka (sore knee) and Marc Gasol (hamstring), who's missed 24 games.

And when Nick Nurse walked into the post-game press conference, the Raptors coach could only chuckle and say: "There's one for the books."

"It was difficult," Nurse said. "The big thing is when you're shifting (players) around a lot is it's going to look disjointed at times and it did. I thought we found some chemistry."

"Obviously, we didn't make shots," Siakam said. "Missing everything. Layups, free throws . . . the list goes on. Threes. At the same time, we still put ourselves with a chance to be in the game and have an opportunity to win."

The Raptors trailed by 17 points in the second quarter to a Charlotte team they'd already beaten twice this season.

They showed some life in the third, and when Powell fed Siakam with a behind-the-back pass on the break, Siakam's dunk pulled Toronto to within five points, and brought the Scotiabank Arena fans out of their seats.

"I just tried to just see how the game was going and play within the flow of that," Powell said. "I thought it was a tough time for us as a team to hit shots and get something going offensively. I thought we did a great job from pretty much the middle of the second quarter and on fighting and battling and scrambling and making plays when needed to give ourselves a chance to win the game."

Lowry's three-pointer with 2:50 remaining gave the Raptors' their first lead of the second half. Rozier responded with a three on Charlotte's next possession, but Lowry connected again from long distance, then drove to the hoop for a layup with 1:14 to play and it was a two-point Raptors lead.

Miles Bridges scored on a three, then Charlotte regained possession with 2.1 seconds left. Rondae Hollis-Jefferson fouled Rozier — and fouled out of the game — and Rozier's free throw all but clinched Charlotte the win. Graham's pair of free throws made it a three-point lead with 1.2 seconds remaining, and Powell's three-point attempt bounced off the rim at the buzzer.

"It looked like a challenge," Nurse said. "It probably wears on you a bit having to work that hard just having to keep all those guys who were living in the paint off the glass a bit."

While the Raptors lead the league in defending the perimeter, the Hornets connected on 43 per cent from three-point range. Toronto shot just 23.8 from beyond the arc, and 35 per cent from the field.

"For two days in a row we've had trouble shooting," Lowry said. "Minus Freddie tonight, minus Serge tonight, and also a game without Marc, but Norm gave us a big boost coming in. We've gotta be a little bit better offensively, but I think we got great shots but we missed a lot."

The Raptors were coming off a 108-97 loss to the league-leading Milwaukee Bucks on Tuesday, that snapped their nine-game home winning streak, and was just their second loss in 19 outings.

Toronto plays its next five on the road, beginning in Denver on Sunday. The Raptors will visit Phoenix, Golden State, Sacramento, and Utah and Detroit before they're back home versus the Pistons on March 14.

"We've usually done pretty good out there, we're a pretty good road team," Nurse said. "I think we've been home for a long time. I think you guys understand that sometimes home is really busy. There's a lot of things going on. It seems like stuff everyday. It's almost like you get a chance to actually regroup on the road."

Powell returned after missing nine games with a fractured finger on his non-shooting hand, and scored on a three-pointer for the Raptors' first points of the game. He'd missed three weeks with a shoulder injury earlier this season, and both injuries disrupted arguably the most consistent basketball he's ever played.

"I think he was good," Nurse said. "I think it was tough for him, conditioning was probably tough but he played great."

Powell led the way with nine points in the first quarter, but the Raptors couldn't muster much offence and trailed 25-23 to start the second.

Toronto had just 18 points in the second quarter, and when former Raptor Bismack Biyombo cut to the hoop for a layup with midway through the frame, the Hornets went up by 17 points. Charlotte took a 52-41 advantage into the halftime break.

Note to readers: This is a corrected version of an earlier story. It corrects the score to 99-96 for Charlotte.