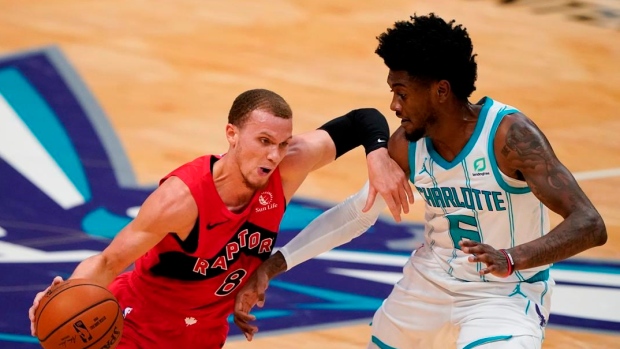 Not long after playing 33 minutes in the Raptors 905 victory over Salt Lake City on Thursday in Florida, Malachi Flynn was the only passenger on a private luxury jet headed to Milwaukee.

The Toronto Raptors rookie guard is the first player this season to complete the double: playing in G League and NBA games on the same day.

The private plane allowed Flynn to avoid a quarantine after being recalled.

"It was the smallest plane I've ever been on, but it was nice to have the whole thing to myself, just the pilot and co-pilot. It was cool," said Flynn, who was tested for COVID-19 just before boarding.

The 22-year-old, picked 29th overall in last year's NBA draft, is on a two-way deal, which allows him to split time between the Raptors and their G League affiliate. He was assigned to Raptors 905 on Feb. 3.

Playing two games in one day was more commonplace when Raptors 905 was a short drive away in Mississauga, Ont. But the global pandemic forced the G League to play a shortened season in a bubble — affectionately known as the "Gubble" — at Walt Disney World just outside Orlando.

Flynn, who scored a G League season-high 35 points on Monday, was recalled to help fill in for Kyle Lowry. Toronto's veteran guard sat out Thursday's 110-96 win at Milwaukee with a sprained left thumb, and was expected to miss Friday's game at Minnesota before the injury will be reassessed.

Flynn learned on the bus back to the hotel after Thursday's win (an 11:30 a.m. start) that he was being recalled, but was initially told he'd meet the team in Minnesota.

"Then like 10 minutes later (Raptors 905 GM Chad Sanders) asked if I wanted to go straight to Milwaukee, and I said 'Yes, of course,'" Flynn said Thursday night. "I had about 30 minutes to pack my bag. So crazy, just non-stop, didn't even get a real meal, so that's what I'm looking forward to right now. A crazy day for sure."

Flynn, who arrived at Fiserv Forum about 40 minutes before tipoff, played five minutes in the NBA game.

The Tacoma, Wash., native has averaged 20.8 points and 34.4 minutes in six Raptors 905 games, and said he was appreciating the chance to develop in the G League.

"It just let me get into a flow a little bit," Flynn said. "I was able to play a lot of minutes and get reps in, different areas of my game to be able to work on, and just be out there and grow, and have a lot of opportunity to do different things. So I think it was really just an opportunity to get better in general."

The Raptors have had huge success with their G League affiliate. Raptors 905 was recently named the G League's franchise of the year for the 2019-20 season, based on three core pillars: "Compete with intensity, lead with integrity, and inspire play."

In five seasons, the 905 have been huge in the development of several key Raptors players including Fred VanVleet, Pascal Siakam, Norman Powell and Montreal's Chris Boucher.

Siakam earned the G League Finals MVP award when he led the 905 to a championship in 2017.

Boucher was was named league MVP and defensive player of the year in 2019, becoming the first player to earn both honours in the same season.

This report by The Canadian Press was first published Feb. 19, 2021.