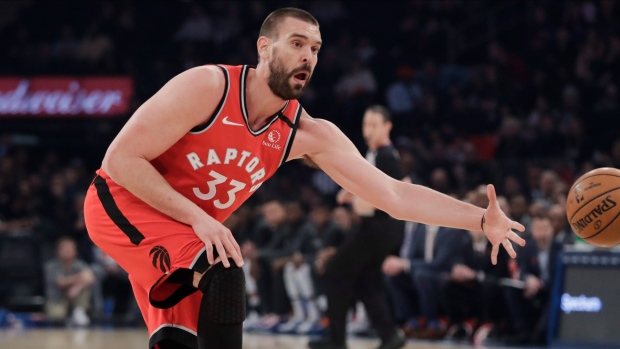 Just as the Toronto Raptors were getting healthy, they could be dealing with another setback.

Centre Marc Gasol left Tuesday's game in Toronto against the Hawks with left hamstring tightness and did not return. The Raptors went on to win the game 130-114.

Gasol left the game with tightness in his left hamstring (the same hamstring that cost him 12 games earlier this season). He will not return tonight.

According to TSN's Josh Lewenberg, it's the same hamstring Gasol missed 12 games with earlier this season.

The 34-year-old had 10 points, one rebound and one assist in 16:29 of action prior to his departure.

In 34 games this season entering play Tuesday, he was averaging 7.7 points to go along with 6.6 rebounds and 3.6 assists.

Following their tilt with the Hawks, the Raptors will be back in action on Thursday against the Cavaliers.