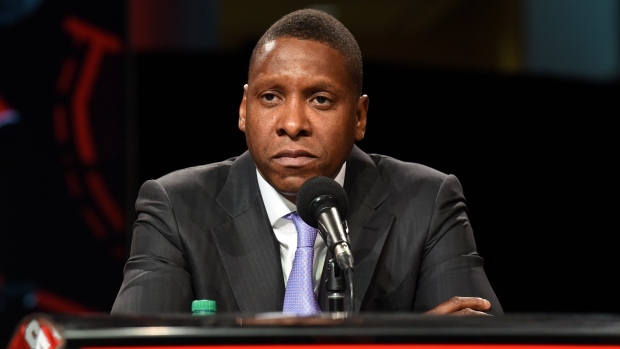 Toronto Raptors president of basketball operations Masai Ujiri released a statement on his vindication from the incident at the 2019 NBA Finals.

Statement from Masai Ujiri on his vindication from the incident in Oakland, via The Humanity Movement on IG: pic.twitter.com/P28Z4hrj5G

Ujiri thanked his family, the Raptors organization, and fans for their support and said his battle is to help stop others from "finding themselves in front of a judge or behind bars because they committed no crime other than being Black."

"I have decided my fight isn't a legal one," Ujiri said in his statement. "Now, the challenge is this: What can we do to stop another man or women from finding themselves in front of a judge or behind bars because they committed no crime other than being Black? That is the work that each one of us must commit to, every day."

A California law enforcement officer dropped his lawsuit against Ujiri last week that stemmed from the altercation.

Strickland, who was seeking US$75,000 in general damages as well as other compensation, alleged he suffered injuries when he was pushed by Ujiri when the Raptors president tried to get on the court following his team's championship-clinching victory over the Golden State Warriors June 13, 2019, at Oakland's Oracle Arena.

The Raptors, team owner Maple Leaf Sports and Entertainment and the NBA were also named in Strickland's lawsuit.

Ujiri later filed a countersuit, alleging unauthorized use of force by Strickland. That has also been dropped.

The lawsuits stemmed from a shoving match between the two, which was caught on video by a fan, as Strickland tries to prevent Ujiri from accessing the court. The video appears to show Strickland shove Ujiri twice before the Raptors president responds.

Strickland's civil suit was filed after prosecutors decided in October not to press criminal charges against Ujiri.

Strickland, who claimed Ujiri did not show the proper credentials to access the court, alleged he suffered "injury to his head, body, health, strength, nervous system and person, all of which caused and continue to cause great mental, physical, emotional and psychological pain and suffering.''

Ujiri called Strickland's lawsuit "malicious," and Warriors president Rick Welts apologized to the Raptors executive after video of the incident was widely circulated.