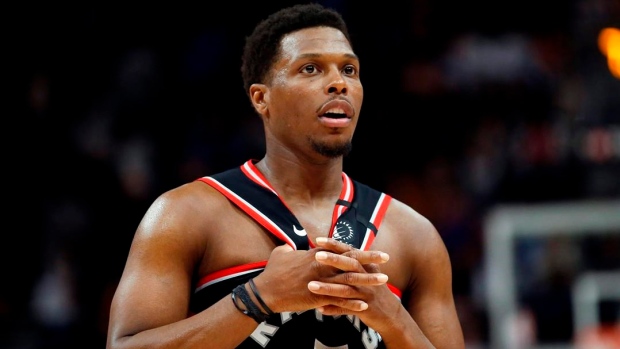 TORONTO – You don’t want to minimize the part they’ve played in their own misfortune – they’re not without fault or agency in their wretched 2-8 start to the season – but you also can’t blame the Toronto Raptors for feeling at least a tad snakebitten.

They just can’t seem to catch a break.

On Monday, and for the second night in a row, the fate of the game came down to the final possession. With the ball in the hands of their all-star forward and a clean look at the basket, the result in both instances was the same – a shot that rimmed out and a one-point loss.

But as bad as things felt on Sunday – after a failed comeback bid against a neutralized Steph Curry and the Warriors in Golden State – this one had its own unique sting.

The Raptors led Portland by as many as 17 points in the game and 14 points in the fourth quarter. They only trailed for two minutes and 13 seconds of a 48-minute contest. It was shaping up to be their most complete performance, and best win of an otherwise disappointing campaign until, all of a sudden, it wasn’t.

Playing in the second night of a back-to-back and fourth game in six nights on the road and bogged down by some familiar crunch-time execution issues, Toronto fell apart. The Blazers closed the contest on a 30-15 run, capped off by C.J. McCollum’s go-ahead bucket with 10 seconds left.

Then, with a chance to win it, Pascal Siakam’s floater in the paint – a better look than the 20-foot turnaround jumper he missed over Andrew Wiggins 26 hours earlier – hit back iron and bounced out.

Even if it wasn’t their worst loss of the season – many would argue last week’s blowout at the hands of the Celtics holds that distinction – it was the most devastating.

“The darn ball won’t bounce our way,” head coach Nick Nurse said following the 112-111 defeat. “That’s the third game this year where one’s gone in and out at the buzzer on us. Hopefully it’s going to balance out as the season goes here a little bit.”

In spite of the record, the vibe around the team appears to be different than it was at this time a week ago.

The mood in the locker room after last Monday’s loss to Boston was not good. Players were dejected. Kyle Lowry – the franchise’s heart and soul – questioned their toughness and wondered if they had lost their swagger. They were 1-5, and it was hard to argue that they deserved any better, given how poorly they were playing.

There were almost no bright spots, no silver linings, and no sign of light at the end of the tunnel, especially with a tough four-game West Coast road trip on the horizon.

However, if you can separate process from results, there was a lot to be encouraged by on the trip.

First and foremost was the resurgence of Siakam. After a slow start to the campaign – which was especially worrisome on the heels of his poor performance in the bubble last summer – the All-NBA forward finally started to look like himself again.

Siakam averaged 24.0 points, 10.5 rebounds, 7.0 assists and only 2.0 turnovers while shooting an efficient 53 per cent, highlighted by his first career triple-double (22 points, 13 rebounds, 10 assists) against the Blazers.

He was unrecognizable from the player that hit rock bottom late last month – getting benched in a New Year’s Eve win over New York for disciplinary reasons. This version of Siakam was the one we saw through most of last season – the pre-pandemic, all-star iteration. He was confident and decisive. He made a concerted effort to get to the rim instead of settling for the jump shot, and let the game come to him instead of trying to do too much – a huge development for this team moving forward.

The rotation is starting to come together, too. For the most part, Nurse has embraced the fact that the team’s best path to playing the way they want to play, particularly on defence, is without a traditional centre on the floor.

The Raptors had Alex Len or Aron Baynes on the court for only 39 of the 192 minutes they played on the trip and were outscored by 19 points in those minutes. Meanwhile, they bested teams by 30 points with Chris Boucher or small-ball lineups the rest of the time.

Boucher, a revelation so far this season, shot a remarkable 25-for-38 (66 per cent) from the field and 11-for-18 (61 per cent) from three-point range over the four games, while accumulating 13 blocks to add to his season total, which ranks third in the NBA.

The team itself is also looking more familiar these days. Their lone win on the trip, a character-building 144-123 victory over Sacramento, was a vintage Raptors game – rallying back after a brutal first quarter and digging themselves out of a big early deficit to pull away in decisive fashion.

Even in their three losses – in Phoenix, Golden State and Sacramento – they showed a level of fight that had been missing early in the campaign.

“I think we played really good basketball,” Nurse said. “We found out a bunch of things about the rotation and [how we want to] play, and I think we’re getting closer to settling in there on some stuff, which I think will be huge. I think there’s some really good flashes of strong defence for long stretches of the game that’s good to see, that’s kind of making its way back into who we are and our identity. And I still say the offence is generating a lot of things that we want it to generate. So, just gotta get on the positive side of a couple of these [games] and build on what we’ve built.”

That’s the problem right now. Despite the cause for optimism, this is a results-oriented business that they’re in, and the results have not been pretty.

One month into the season, the Raptors are tied with Dwane Casey’s Detroit Pistons for the worst record in the NBA. They have blown double-digit leads in six of their eight losses, after doing so in just four of their losses in 2019-20. They’re also 0-5 in games that were within five points in the final five minutes.

They haven’t been as bad as any of that would indicate, though. Consider their point differential. They’re being outscored by 1.4 points per game, ranked 19th in the league – a nearly identical mark to the 4-4 Miami Heat and 5-5 San Antonio Spurs, and better than the 6-4 Warriors, 5-4 Oklahoma City Thunder and 6-5 Orlando Magic.

In other words, they’ve played well enough to be a .500 team.

They’re better than their record, but you also can’t chalk the record entirely up to bad luck. There are underlying concerns, even as some of the early season issues begin to correct themselves.

They’re still not getting enough from some of their underperforming regulars, like OG Anunoby and Norman Powell. They need a few more guys to separate themselves off the bench. There are legitimate questions about the team’s roster construction – including and especially the lack of production from the centre position – as well as Nurse’s rotation.

They’re headed in the right direction, even if the standings don’t reflect it. Assuming they can continue along that trajectory and address some of the aforementioned issues, there’s still time and hope for the 2020-21 Raptors.

Even with 10 fewer games in the shortened schedule, if there was ever a season to start 2-8 it might be this one. Nobody is running away with the East, and with the play-in tournament, as well as all the roster uncertainty in the COVID-19 era, they just need to string a few wins together to get back in the mix.

They’ll have that opportunity. After spending 14 of 16 days on the road – in seven different cities and with six time changes – the Raptors returned to Tampa on Tuesday and will begin a five-game home stand when the host Charlotte in the first of consecutive meetings Thursday night.

At some point, ideally in the near future, those moral victories need to start turning into actual victories. The question is whether they can hang in and stay together long enough for their luck to turn.

“I think we’re getting better,” said Siakam, face hidden with his head in his hands following yet another demoralizing loss on Monday. “I think we’re doing the right things and we’re trending up, but it doesn’t really matter if you’re not winning.”​