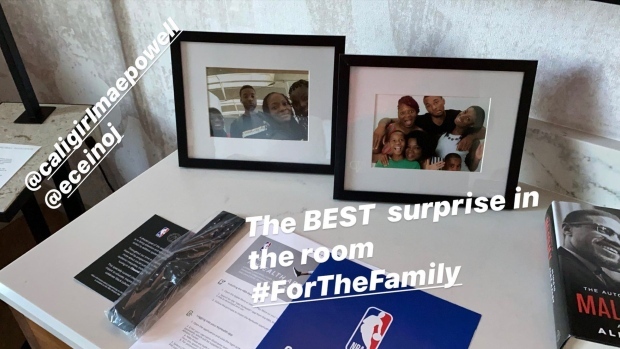 TORONTO – The Toronto Raptors were the first NBA team to arrive in Florida. They travelled to Naples on June 22 and trained in nearby Fort Myers for a couple weeks before relocating to the league’s Disney bubble on July 9, and they’re hoping to be there a while.

Thirty-seven members of the organization – including their 17 players – are in Orlando for the restart and will spend at least 63 days away from home. If everything goes according to plan for the defending champions and they’re fortunate enough to return to The Finals, they could be gone for as many as 114 days, or just under four months.

Eventually, players should be able to have a few guests join them on campus, but for at least half of their stay the only contact they’ll have with their loved ones will be through a phone or computer.

Living in such an unusual and emotionally-trying environment for an extended period of time won’t be easy, but the Raptors are doing their part to make their players, coaches and team personnel feel a little bit more at home.

When they first checked into Disney’s Gran Destino Tower hotel last week, each member of Toronto’s traveling party found two framed photos of them with family and friends set up in their rooms – a small gesture from the team, but one that went a long way.

"It's cool, man," said all-star guard Kyle Lowry. "That's just one thing that the Raptors organization has always kind of [emphasized] is family, your family. So it's cool. Nice gesture."

"I noticed it walking in my room," rookie guard Terence Davis said. "They had pictures set up, one of me and my son and then one of all my family members at a college game. It meant a lot, man. It felt like they really care. Just seeing the pictures, it was heart-warming."

"That was huge," said guard Patrick McCaw. "Just walking into my room knowing this is where I have to be for the next few months, walking in seeing my mom, my dad, sisters, my daughter, my girl, it just made me at ease. It made everything a lot easier. Coming here was a huge commitment, but having their photo there, it was nice, it was a nice gesture."

The idea spawned from the team’s "family first wall" back in Toronto. When you walk into the Raptors’ locker room at Scotiabank Arena, one of the first things you’ll notice is the giant collage of family photos on the wall immediately to the left. Just about everybody in the organization – from top to bottom – is represented. They’ve had a variation of it up there for years.

The initial plan was to recreate the wall in one of the team spaces at the hotel in Orlando. The idea to split the photos up, frame them and put them in each individual room came from Karen Goodwillie – wife of Raptors assistant coach Jon Goodwillie. She made the suggestion to her husband and he brought it to Teresa Resch, VP of basketball operations and player development, who oversaw the project. 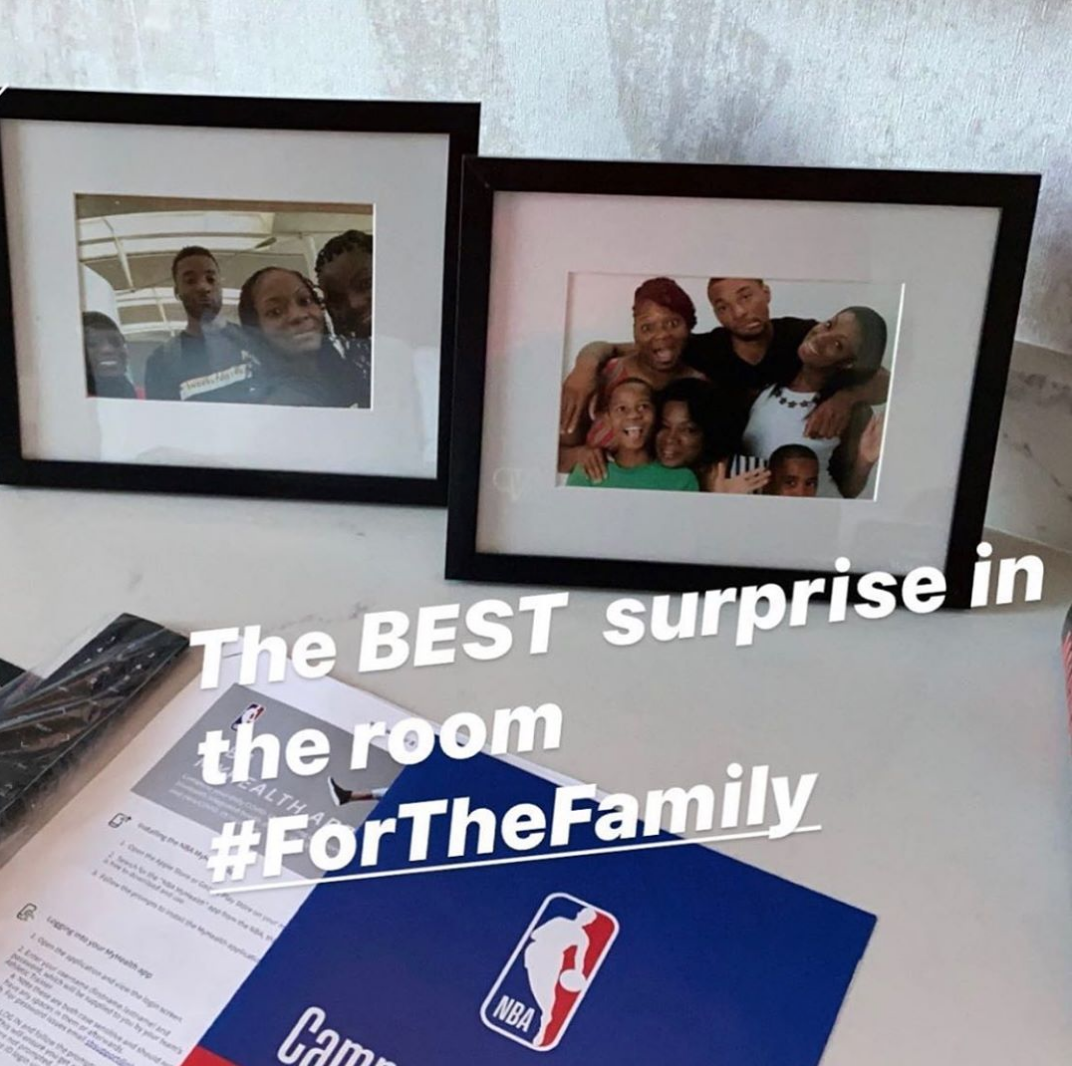 "Family plays such an important role in our organization and this was just a reflection of that," Resch told TSN. "It just shows that we know the people that surround you are important and that they’re not gonna be there, so if they can be there virtually [that’s big]. So, I think it’s about acknowledging that family is important during this time, recognizing that and not pretending that it’s easy to be away from the people who mean a lot to you for a long time."

It came together quickly. It needed to. The NBA granted teams advanced access to set up all of their rooms in the bubble a week before arrivals, but each organization had a 24-hour window and could only send two representatives. If the Raptors were going to execute their plan they had to get it done in just a couple of days.

Fortunately, they didn’t have to go hunting for photos. Rae-Marie Rostant – a team services assistant – is the point person for the family first wall. Over the years, players and staff members have sent her their pictures to use for the locker room collage, so she already had them on file. She sent the images to Chad Sanders, general manager of the Raptors’ G League affiliate, who got them printed in Naples. They also shipped roughly 75 frames to Florida. Bill Bevan and Will Crews, who work in team security, made the two-hour drive from Naples to Orlando on July 2 and set the framed photos up in each of the Raptors’ 37 hotel rooms.

"It was an organization-wide thing," Resch said. "If we didn’t have all those photos already for that wall we would’ve never been able to do it. Family has always been a focus for the team, so it was only because of that that we were able to make it happen. I think it was really well received by a lot of people because they didn’t know [we were doing it]. It was a surprise."

Having a couple photos on their dresser won’t exactly make up for all of the things they’re going to miss, or have already missed being away from their families. Lowry had to wish his son a happy fifth birthday over FaceTime on Wednesday. For Oshae Brissett, holding his two-month-old daughter again will have to wait until he gets back. Fred VanVleet has two kids under three at home. Nick Nurse has two under four. However, the gesture reinforces that they’re all in this together.

"I think that [being away from family is] really another part of the puzzle, and it’s a big one," Nurse said earlier this month. "For me, I would say that it starts with conversation, when you’re bumping into Fred or Kyle, and you’re asking ‘em how are the wife and kids, and what are they doing, and when was the last time you talked to them. There’s a lot more of that going on than I would say normally would happen. It’s not like we don’t do it normally but there’s a lot more now because we’re all showing pictures and whatever.

"I just think from my standpoint, it’s another one of those things you’d be more lenient on. Like, [for] example, [if] we’re getting ready to start a meeting and right as that happens somebody says oh, man, my kid’s FaceTiming me, and you say take it, go out in the hall and take it and we’ll wait for you."

It’s the small details that make a difference. With communications director Jennifer Quinn taking the lead, the team has "Raptorized" their entire hotel floor, decorating the hallway with team paraphernalia, including "We The North" banners and a giant mural of the Toronto skyline.

"We’re going to be very open to what the environment needs," said Resch. "So, we’re just living in it everyday down there and reacting and figuring out how to get a little slice of home, and what that looks like there, to make everybody feel comfortable."

With most of the league living in such close quarters, other teams and other players are surely noticing what the Raptors organization is doing to make their players and staff feel at home in the bubble. While positive word of mouth isn’t the primary purpose for treating their people the right way, it’s also not a bad reputation to have earned. And what happens when other clubs inevitably try to emulate those small gestures?

"You know what they say – the NBA is a copycat league," Resch said. "And that goes beyond just what happens on the court. So, what do they say? Copying is the best form of flattery? So, we’ll [gladly] be flattered."