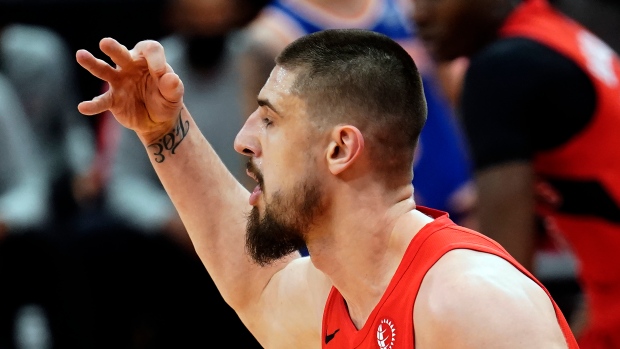 TSN's Josh Lewenberg notes that with Len out of the picture, Toronto's roster currently sits at 14 players.

"Will be interesting to see if they keep the 15th spot open for now, sign somebody else, or convert Yuta Watanabe's two-way contract to an NBA deal (which seems like an inevitable move)," said Lewenberg in a tweet.

Lewenberg also mentions former Raptor Rondae Hollis-Jefferson as a move that might make sense. The 26-year-old is currently a free agent after spending last season in Toronto.

Aren't a ton of interesting options out there, but one that could make some sense: former Raptor Rondae Hollis-Jefferson. Not a traditional C but would give them another small-ball option. Culture fit, familiar with the system and brings the energy/defensive focus they want/need.

Len signed with Toronto after playing 55 games last season with Atlanta and Sacramento. The Ukrainian-born player was selected No. 5 overall by Phoenix in the 2013 NBA draft.

The centre position has been a weak spot for Toronto since Marc Gasol and Serge Ibaka departed during free agency.

Aron Baynes, who also joined the Raptors during free agency, has struggled at the position. Canadian Chris Boucher, however, has been excellent coming off the bench.

This report by The Canadian Press was first published Jan. 19, 2021.