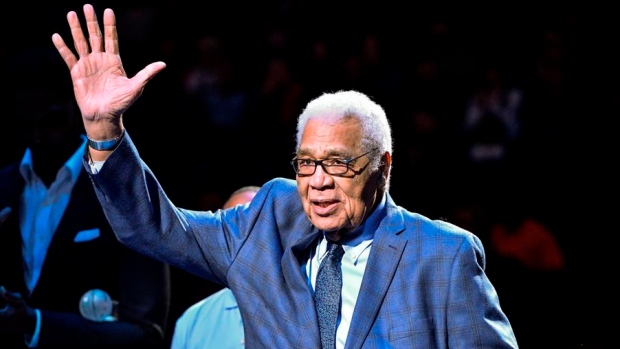 TORONTO — Wayne Embry remembers the shock and sorrow that swept through the Boston Celtics when Martin Luther King Jr., was assassinated hours before Game 1 of the 1968 Eastern Division finals.

That April 5 game in Philadelphia, a day after King's death, almost didn't happen.

Eight of the game's 10 starters were Black, including Bill Russell, one of the most vocal athletes during the civil rights movement.

The Celtics' game-day meeting was heated, some white players argued against a postponement.

But as racial unrest exploded in cities across the U.S., Celtics general manager Red Auerbach believed playing would keep people off the streets.

"So, of course we had to go out compete, but in the back of our minds, the Sixers and Celtics players shared grief and were visibly upset and disturbed about what had happened. But we still went out and played," said Embry, who is now the Toronto Raptors' senior basketball adviser.

The mood was eerie that night in The Spectrum as the Celtics beat Philly 127-118.

"You could tell there was a difference, people were afraid of what might happen, you could sense it, you could just feel it," said Embry, whose Celtics won the series then went on to beat the Los Angeles Lakers in the Final.

Cooped up in his home near Dayton, Ohio, because of COVID-19, the 83-year-old Embry has watched the racial unrest of the past few weeks play out on his TV. The images remind him of the turbulent 1960s.

"I am saddened, angered, and quite frankly terrified by the way things are, and this is how many years later?" Embry said. "We thought things were well, and things got well in the late 70s and early 80s, we started to see progress, corporate America opened up, I think we saw great progress. And I think it continued on into the 90s.

"But in recent years, it's just amazing, somehow we've regressed. It's sad to see."

Since George Floyd's death last month in Minneapolis, numerous NBA players including Raptors veteran guard Kyle Lowry have joined the hundreds of thousands of people who have protested across the U.S.

The NBA, shuttered on March 11 due to the global pandemic, is tentatively scheduled to resume on July 30 in Orlando, but some players including Kyrie Irving and Dwight Howard say now's not the right time to play.

"Basketball, or entertainment, isn't needed at this moment, and will only be a distraction," Howard said in a statement. "I would love nothing more than to win my very first NBA championship. But the unity of my people would be an even bigger championships that's just too beautiful to pass up."

Embry understands the sentiment, but doesn't agree with it.

While 1968 would be Embry's lone NBA title as a player, the five-time all-star and Hall of Famer, nicknamed "The Wall" for unforgiving screens, went on to become the NBA's first Black GM with Milwaukee in 1972. He was also presented with the National Civil Rights Museum's Sports Legacy Award.

Embry's wife Terri participated in the first march from Selma to Montgomery, Ala., on March 7, 1965, known as "Bloody Sunday." Hundreds of protesters planned to walk across the Edmund Pettus Bridge to Montgomery, but were stopped by police in a bloody clash that saw protesters beaten and tear-gassed.

Wayne and Terri still talk about that day.

"We'll talk about the violence and cruelty from those who threw rocks and whatever else they could find," said Embry, who was playing for the Cincinnati Royals at the time and wasn't with his wife.

Terri was whisked away from the scene in a truck with a protective tarp.

"She gets emotional when she thinks back to that," Embry said.

Besides trips to the nearby pharmacy, Embry and his wife have stayed in their home to avoid the global pandemic.

A stretch of U.S. Hwy 40 that runs through the nearby town of New Carlisle, where he attended Tecumseh High School, is named Wayne Embry Way.