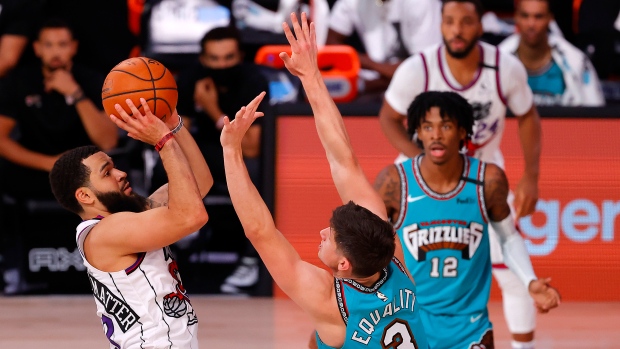 TORONTO – It took two decades for the Toronto Raptors to muster up their first 50-win season.

On Sunday, while fittingly dressed in their throwback pinstriped uniforms, they reached that plateau for the fifth straight campaign.

For context, no other NBA team has an active streak longer than two consecutive 50-win seasons. It’s yet another reminder of how far the Raptors organization has come and how remarkably steady they’ve been during the most successful run in franchise history.

“It’s a consistency,” head coach Nick Nurse said following his team’s 108-99 victory over Memphis, which guaranteed them a second-place finish in the Eastern Conference standings.

“Where do you want to start? Let’s start with Kyle [Lowry], he’s been here for the whole run. We plugged in some new guys here and there that have probably exceeded most people’s expectations, from Pascal [Siakam] to Fred [VanVleet] to [Norman Powell] to Serge [Ibaka]. Marc [Gasol] was a nice addition as well. That’s where I would start. I think Kyle’s toughness and leadership has really set the tone for this organization for this kind of run.

“Obviously, Masai [Ujiri], Bobby [Webster] and their guys have made great decisions on the roster. And this year, I think it’s impressive with all the injuries that we had guys we weren’t quite sure about step in and really contribute. Give them credit [but] I think some of that is the culture and the winning, and you kind of have to fill big shoes and they do it with a lot of energy and effort.”

This time, they didn’t even need a full 82-game season to accomplish that feat. If not for the hiatus and condensed restart schedule, this could have been the year they finally hit 60 wins.

Still, their 50th victory was a notable one. It officially locked them into the East’s second seed, allowing them to use the final three regular season games to tighten some things up and manage minutes as they wait to find out whether they’ll open the first round of the playoffs – beginning August 17 – against Brooklyn or Orlando.

It was also a nice bounce-back effort following one of their worst losses of the season – a 122-100 blowout at the hands of the Boston Celtics on Friday.

Nurse wasn’t interested in talking about it prior to Sunday’s game. He said he didn’t even watch the film. The defending champs were unrecognizable that night – lacking energy and focus, and completely out of sync on both ends of the floor. It was their first loss in the NBA bubble and a rare blip during an impressive campaign.

In recent years, the Raptors have almost always rebounded from tough losses quickly, which is why Nurse wasn’t too concerned about Friday. It’s the same reason for their sustained success, another by-product over their consistency, and we saw it again against Memphis.

“Obviously we’re competitors and we’re pros,” said Siakam, who enjoyed his own personal bounce-back performance, scoring a game-high 26 points and hitting a couple of big three-pointers in the fourth quarter. “At the end of the day, you lose games. I don’t even care by how much we lost. It’s just a loss. Every time we lose, we always have that chip on our shoulder and we know what to do. As a team, everyone is a professional and we understand we can’t have those types of losses. And then the next day, we don’t have to say anything. We just go out there and get it and try to win the next game.”

Siakam, who was held to 11 points on 5-of-15 shooting, has gotten off to a slow start in the bubble, but had his best showing of the five seeding games on Sunday. He was an efficient 9-for-16 from the field. He looked more engaged defensively and was more patient with the ball in his hands. For the most part, he didn’t rely on the jumper. He was attacking mismatches and finding ways to use his length and athleticism to score around the rim.

“Obviously there were a couple games there where you feel like you didn’t play as well as you could have, but I just feel like it was expected for me and I had to get a rhythm and continue to understand that this is what I do and just continue to get better,” Siakam said. “Can’t get down on yourself, especially when you’ve done this [before]. I always feel like there’s gonna be periods where things aren’t gonna go the way that you want it to go, but you gotta continue to play, continue to do what you do and figure it out. I’ve always been able to do that.”

Like the Boston game, the Raptors couldn’t get a shot to fall early on, despite generating good looks. They were 1-for-9 from three-point range in the first quarter and most of those attempts were wide open. However, unlike Friday’s loss, when they let their shooting slump affect other facets of their game such as moving the ball and defending, they stuck with it.

Desperately trying to hang onto the eighth and final playoff seed in the West, the Grizzlies hung around and made a run late in the fourth, cutting Toronto’s lead to three with three and a half minutes remaining. But, thanks to some clutch shot making from Siakam and Lowry and another timely steal from VanVleet, the Raptors were able to hold them off.

With the win, they improved to 4-1 in the bubble – an encouraging record considering the difficulty of their schedule. There are areas of concern, though. One reoccurring issue has been their turnovers. They had 26 of them against Memphis and are averaging 19.6 at Disney – the most of any team during the restart and up from their regular season mark of 14.4.

That’s just one of the things they can use the next three games to emphasize and try to correct.

“I think it’s a lot of unforced turnovers, to be honest,” Siakam said. “It’s something that we’ve gotta correct and I feel like we will as a team. That’s not us and we all know that. Everyone is trying to rectify it.”​