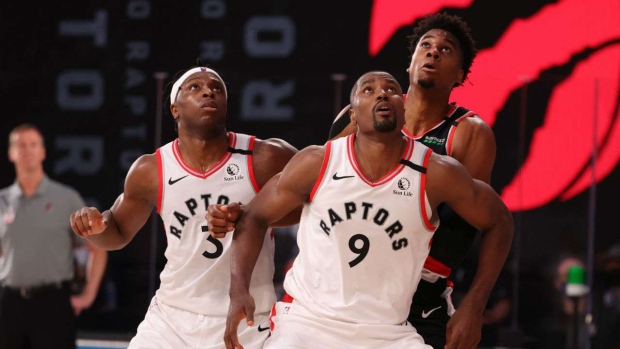 TORONTO – Rondae Hollis-Jefferson did not like the direction a recent media session was taking.

He was asked nine questions, all of them basketball-related. He waited for one that would allow him to speak about the topic most pressing on his mind, but it never came. So, the Toronto Raptors’ forward left us with an impassioned call to action.

“One final thing,” Hollis-Jefferson said. “I just wanted to say, I didn’t say anything [earlier because] I just wanted to see how the questions were set up and what you guys wanted to ask. Some of you guys have the biggest platforms in the media and talking points, and lots of people follow you guys, so I want to challenge you all.

“We know what is going on in the world and where our focus should be. I know basketball has been missed and it’s loved, but there are a lot of crazy things going on in this universe and we need you guys, along with a lot of other people, to put this word out, to put this message out. We need unity. We need love. We need positivity. And that starts with us, and then it starts with you guys because you guys get our message out. So please, please take this a little bit more seriously. I appreciate you guys.”

With the NBA resuming its season this week, Hollis-Jefferson’s plea is timely and important.

After a hiatus that spanned nearly five months, basketball is making its much-anticipated return. With it come the highlights, rivalries and other fun storylines. The hope is that it will bring fans of the game a little bit of joy during hard times. The fear is that it could distract from the issues that the league’s players, coaches and personnel are working so hard to address.

How do they make sure that slam dunks and three-pointers don’t take the spotlight off the fight for social justice? How do they keep the names of the victims – George Floyd, Breonna Taylor, Ahmaud Arbery and many others – at the forefront of the discussion? How do they ensure the conversation and the Black Lives Matter movement continue, and even get louder, once the ball is tossed up?

“I think with our league, what we’re doing as players is we’re voicing everything we need to voice,” said Kyle Lowry. “We’re always going to continue to talk about justice for Breonna Taylor. We’re talking about voting. We’re talking about voting suppression, we’re going to continue to push the issues on the back of our jerseys, in our interviews and in our process. And for the media, I think you guys just keep the conversation going and highlight the things, not just basketball, but the things that we are pushing for.”

After Floyd died at the hands of Minneapolis police officers on May 25 – sparking worldwide protests and shining a light on the racial injustice and inequality that have existed for generations – the Raptors started their own internal conversation.

They held multiple team calls via Zoom and formed sub-committees – one consisting of players, another with coaches and management – that continue to meet regularly.

They decided that if they were going to leave their loved ones behind in the middle of a global pandemic to go to Orlando and live in the NBA bubble for what they hope will be several months, it couldn’t be in vain. They would have to use their platform to amplify the message and inspire real, meaningful change.

They’re not alone in that regard. The opportunity to reach millions of people under the bright lights of basketball’s restart was the biggest reason why many players, several of who were initially reluctant to participate, decided to play.

From the moment the Raptors arrived on the Disney campus – making the two-hour drive from Naples, Fla., in a pair of busses with “Black Lives Matter” written in large, white letters across the sides – they’ve set the bar.

“We’re actually really impressed [with how the organization has stepped up],” said Norman Powell. “Right after our first team meeting, they’ve been really quick to respond to the feedback from the players and really proactive in making sure they’re behind us every step of the way. I thought the bus was really cool and the publicity that it got. Those are the type of little things that show where we stand, and we’re going to continue to take strides and steps forward and really effect some real change.”

In terms of messaging, the Raptors have been as visible as any team in the bubble – from their busses, to T-shirts, masks and media backdrops all displaying “Black Lives Matter.”

Nick Nurse, along with the other 21 coaches participating in the restart, has warn a large pin during his team’s scrimmage games that reads “Coaches Against Racial Injustice,” – one of the many initiatives the league’s head coaches planned during their regular conference calls.

When they take the court against the Lakers on Saturday, all 17 Raptors players will be wearing a message on the back of their jerseys in place of their names. However, several players have expressed their disappointment regarding the “cookie-cutter” – as Powell put it – list of 29 approved messages the league gave them to choose from.

The jerseys, like the rest of the messaging, serve a purpose – to help spread awareness and keep the conversation going – but the Raptors recognize that it’s just a small part of what they can and should be doing to make a difference.

“I’m not losing sleep over putting something on my jersey,” said Fred VanVleet. “I think there’s a lot bigger fish to fry and a lot more work to do. There [are] real issues going on. Breonna Taylor’s killers are still walking around and living a very free life. So, I think there are other things we can worry about more so than what we’re putting on the back of jerseys.”

“I don’t think that really matters, man, just having something on our jersey,” Pascal Siakam added. “It’s the work that we have to do on the other side that’s gonna show. We all have to put in work, and I think our team is doing a fantastic job of finding ways to [make] effective change and do something that’s gonna mean something.”

As Lakers star LeBron James said, Black Lives Matter should be more than a movement, and it should certainly be more than just a moment in our history. The Raptors aspire to effect lasting change.

They’ve appointed John Wiggins – formerly the vice president of Toronto’s G League affiliate, Raptors 905 – vice-president of organizational culture and inclusion. It’s a new position, in which Wiggins will, according to the team’s press release, “lead a group drawn from all parts of the organization to address social injustice, inclusion, equality and political reform” internally and throughout the community.

While these issues are currently front and centre in the U.S., Wiggins – who grew up in Mississauga, Ont., – knows that systemic racism is not just an American problem.

“There’s no issue too big or small that I think we can’t take on,” Wiggins told TSN’s Kayla Grey. “Part of the reason I wanted the job was because I felt that [with] the bandwidth and the capacity of the Raptors, and then you tag on Maple Leaf Sports & Entertainment, there’s a lot that we can do. Those are two pretty big platforms here in the country of Canada. As I’m starting to receive messages about systematic corporate prejudice and bias, I’m starting to hear more about the diversity that needs to happen in our education system, or even just the relations that happen with our police force. All of these things are items and issues I believe we can address, and we can help with, and we’re going to.”

Individually, Raptors players and staff are also doing their part.

Rookie guard Terence Davis was one of several players around the league to use his recent media session to demand justice for Taylor – the 26-year-old woman whose life was cut short when she was shot and killed by police in her Louisville, Ky., apartment on March 13. The three officers remain free – none has been charged with a crime.

“I just want to make sure I’m doing the right thing and using my platform as well as I can,” Davis said. “We’re all united. We might not be on the same team but we’re still united in this league. Just want to keep the focus on Breonna Taylor’s killers and just keep that going because it’s still going on in the world.”

Many other Raptors players have used their platform to speak up and to contribute. Powell is donating 100 per cent of sales from the spring and summer line of his Understand the Grind brand to two foundations: Toronto-based Black Women in Motion and Color of Change in the U.S. He’s also planning to personally match those proceeds. Nurse bought the entire team Black Lives Matter masks, featuring the Toronto skyline and CN Tower, to support a local, Black-owned business.

Nurse and assistant coach Jim Sann have also spearheaded an initiative to educate the 650,000 U.S. citizens living in Canada on how they can register to vote in November’s presidential election.

“We're doing a lot of things that a lot of people don't know about just as far as using our voices and our platforms and keeping the conversation going,” Hollis-Jefferson said. “I think that's what it's about. Not letting things die down. You know, sometimes you have some issues, a pretty big issue, and people just kind of like let it fade to the back or whatever. But that's not the case. We're not going to let this fade away. We're going to keep pushing and keep marching forward until justice is served.”

In powerful moments ahead of the first two games of the NBA re-launch on Thursday – Jazz vs. Pelicans and Clippers vs. Lakers – teams gathered together and kneeled during the anthem. The Raptors also have a demonstration of unity planned for their reopener on Saturday. Still, that’s just another step in carrying the momentum of this moment forward. The work continues.

“What will be going through my head [before Saturday’s game] is justice for Breonna Taylor, George Floyd, Eric Garner, all these guys, all these Black human beings, Black men and Black women, being killed in cold blood,” Lowry said. “That stuff hits hard and I have two young children and I would hate to have that happen to them, or happen to me, or to anyone in my family, or anyone I know. I couldn’t imagine going through that and I think all of that is going to be playing in my head.”

“The league, the players, we say, this time is the time to really do it for real,” said Serge Ibaka. “Not just do it and then forget about it. To do it, and to keep doing it, to keep going. So what you saw [Thursday] night is just the start.”​