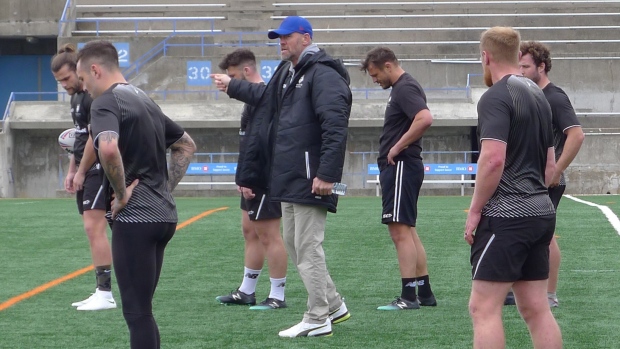 Like the rest of the sports world, the Toronto Wolfpack have been in self-isolation, pushing the pause button on their first Super League season.

Amid the COVID-19 outbreak, the team revealed on March 15 that four players were being placed into self-isolation. The team stated that they were experiencing "mild possible symptoms of COVID-19". That number rose to five a day later.

In response, the RFL (Rugby Football League) and Super League suspended all competitions that same day. They re-affirmed their decision Tuesday.

For the Wolfpack, the spreading of the disease not only thrusts their season into uncertainty, but it could significantly impact their home schedule as well. With both the club and its opponents relying on air travel to enter the country, things sit squarely with the governments of Canada and the United Kingdom once both countries move past the stages of self-isolation.

Bob Hunter, chairman and CEO of the Wolfpack, spoke with TSN about the team’s handling of their potential coronavirus cases and what 2020 could look like for the club and Rugby League.

The team is approaching the 10-day mark since the club announced four players were placed in quarantine with symptoms similar to COVID-19 and a fifth followed soon after. How are things progressing for those five?

The good news is, and I literally spoke with coach (Brian) McDermott today, all five of those have come through with no symptoms whatsoever. There was a sixth player whose wife was sick, and she too seems to have gotten through it and she is fine. So at this point we have no players that have been affected. It was very much precautionary, and at the time we didn’t want to take a chance with those guys infecting the team or anyone else.

The Wolfpack acted swiftly when those symptoms arose, while the RFL (Rugby Football League) sorted things out. How reassuring is it to look back and say ‘we handled this quickly and correctly’?

I think it was a matter of…this thing was just starting to get the high level of profile that it has. And our medical guys were talking to the other teams’ medical staffs and I think it was just a general consensus among the teams that, if there’s anything, you have to jump on it right away. Certainly Jon Skinner, who handles our medical side, was researching a fair bit. He was aware that this thing could travel quickly so we just wanted to act to make sure nobody else got infected.

Some of the club’s players have been a bit more outspoken over the last few weeks. Some have discussed their symptoms, others checking in with fans on social media. Has the team encouraged that kind of interaction to help educate the public, or is this something the players took into their own hands?

I would say they took that into their own hands. Certainly we encourage them from the standpoint, with the league stepping down, to continue to communicate with and engage with our fans. To be very active on social media, tastefully active, we support that. It was a matter of sending out positive stuff about safety, isolation and everything else.

Does it matter whether they’re athletes or not? Not really. But there is some opportunity to prove that it doesn’t matter who you are, you’re at risk.

Overall, you have a unique view of this situation as a key member of the world’s only transatlantic team. What has it been like to experience this from your perspective?

My contact with the team has been daily. And it’s obviously been more than daily over the last month since we’ve figured out what this is all about. Being UK based, our main training facility is there, and we were obviously gearing up for the team’s return in three weeks. Now all of the logistics and planning that were going along with that are put on hold, or re-planned, or we’re putting new contingency plans into place, but we had to do it in conjunction with the UK guys. So from a coach standpoint and from our GM in the UK’s (Martin Vickers) standpoint, we really can’t do anything without them. We also need to be in constant communication with the RFL and with Super League, so it’s tough to manage from afar. I would rather be there. But even now, they’re all working from home or self-isolated now so it doesn’t really matter.

The RFL announced yesterday that the suspension of play has been extended indefinitely. How do you feel the RFL and Super League have handled things so far?

Well again, the NBA and the NHL were very aggressive in their approach and they’re applauded for that. I think Premiership (Rugby) in the UK got on it a bit earlier than we did, but we were within days of those previous announcements. So I think as a league they’ve done a good job. They’ve looked to the health system and the health authorities and the government in the UK to provide them guidance on what to do and when to do it. And as of yesterday, we had a board meeting for Super League and we heard exactly what the government is saying and what their instructions were.

Obviously the status of the April 18 home-opener isn’t looking promising, but taking a big picture look, what needs to happen for the team to play any games in Toronto this year?

It’s trying to nail down a hard start date. We’ve looked at scenarios of a June 1 start now. Given that we’re three weeks away, we don’t think this thing is going to be behind us in three weeks. There’s literally a June 1 start plan, a July 1 start plan, and that’s as far as we’ve gone. But we think that we can get a meaningful season in even from that point. Now that may not be our 11 games in Toronto, but it at least could be more than half. Again, the challenge becomes that the world and the virus are at all different stages in different countries. Canada and the UK are not going to announce on the same day that travel restrictions are lifted. So will Canada be in advance of them? Who knows? But it’s really a matter of monitoring it day-by-day and that’s what we’re doing now.

There are certainly lots of professional sports that want to get back to playing in both North America and the UK and are chomping at the bit to do it…but it’s going to take time.