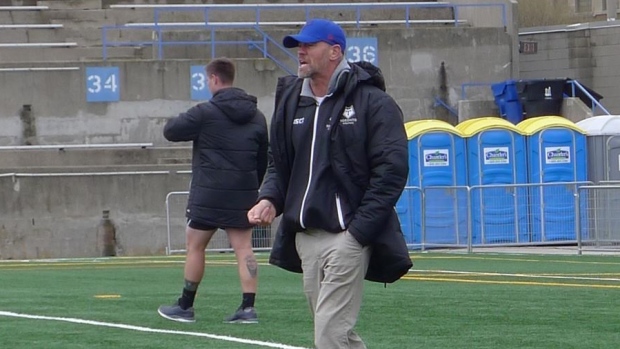 "I won't pull any punches," said the 50-year-old former Royal Marine. "It's rocked everybody. It's shocked and stunned me."

McDermott had to give the news to his players via a Zoom call, one final negative update on the transatlantic rugby league team after months of uncertainty during the pandemic.

"That was one of the hardest ones I've done, where I'm effectively telling the players 'That's us done. That's the fight over. We are all now officially unemployed. And we've got to go out and try and find employment somewhere else. And this dream is over for everybody.'"

"Nobody said too much … A very sombre moment for everybody," he added.

For players and staff who have not been paid since June 10, there is also the fear they may never see money owed. McDermott, for one, signed a new five-year contract last November.

"That's not worth anything," he said with a laugh.

"The journey we were on was more than promising," he added. "And just overnight — bang. Gone. It's finished. That's it. Done. You're over."

McDermott says Super League's criticism of the club's proposed new business plan is nothing more than a smokescreen.

He believes the fate of the Wolfpack came down to one issue — money. Potential new owner Carlo LiVolsi wanted the same share of the central distribution funding as the other 11 Super League clubs.

"That's the reason. And I think that's the embarrassment of all this, not what we did."

That central funding, worth about 2.3 million pounds ($3.9 million) per team in a normal year, is drawn primarily from TV revenue with a portion from sponsorships. Lower-league teams share a much smaller amount.

Under terms of its agreement with rugby league authorities, Toronto was denied any of that. The club believed the issue would be reopened once it got to Super League, but that didn't happen.

McDermott, who acknowledges the Toronto franchise should never have agreed to its original terms of its entry into the sport, wonders what other league discriminates against one club in such a way.

Super League has already started looking for a team to replace the Wolfpack with reports that the replacement franchise will get a smaller share of the central distribution funding than existing clubs.

"I think what the Toronto Wolfpack's done for four years without distribution (funding) has been amazing," said McDermott. "I think (current majority owner) David Argyle, on reflection needs a huge amount of credit, not so much about how he ran the club — I won't try and defend that, that wasn't good enough — but (for) funding the club to the level he did for such a long period of time with no ending in sight of this ridiculous concept that we don't get distribution (funding).

"Added to that, we've also got to pay for everyone else's travel and accommodation (in Canada)."

Argyle has said he and the existing ownership group poured $30 million into the team since it first took the field in 2017.

News that Super League, in mulling over Toronto's reinstatement bid, had appointed an independent committee to look into the viability of the sport in North America had heartened McDermott.

"All the evidence and all the common sense would suggest that we would get another go," he said.

The Wolfpack's last home game, a 24-6 win over Featherstone Rovers on Oct. 5, 2019, in the Million Pound Game that earned the team promotion to Super League, drew an announced sellout crowd of 9,974 at Lamport Stadium. The previous franchise record was 9,562 — the highest single-game attendance for any game in the second-tier Betfred Championship — set during Toronto's April 2019 home opener against Swinton.

The Super League-appointed committee concluded "that operating a team in a fiercely competitive North American sports market was non-strategic and added no material incremental revenue to Super League in the short or medium term."

The 11 other Super League clubs had a vote on Toronto's fate, as did the Rugby Football League and Super League chief executive Robert Elstone. The vote reportedly was 8-4 against the Wolfpack with one abstention.

Because of the pandemic, the Wolfpack never got a chance to play any Super League games at home this year. The team stood down July 20, saying it could not afford to play out the remainder of the season.

Super League ripped up Toronto's participation agreement and expunged it from the standings.

McDermott acknowledges the team and Argyle made mistakes. But he says the Wolfpack found a home and fans in Toronto and could have survived post-COVID if given the chance.

While at least 10 Wolfpack players have found other clubs, either on loan or permanently, others have suffered without pay. Few get rich playing rugby league, a punishing sport that takes a physical toll.

Veteran forward Jon Wilkin, a former England international, told Sky Sports that one of his Wolfpack teammates "has pretty much borrowed all of the money he can, is getting food tokens for food and he was being paid 20,000 pounds ($34,175) a year — he's not a professional footballer, he's not on millions of pounds a year."

He cited three others — one delivering dog food for a living, another living in a camper van because he can't afford rent and a third "doing surf lessons to make ends meet."

"You stop paying our players for two months and most of them will run out of money," said McDermott.

Veteran forward Adam Sidlow, for example, joined his father-in-law's groundworks company and is operating a dumper.

McDermott is no ordinary coach. In eight seasons with Leeds Rhinos prior to taking over Toronto, he won eight four Grand Finals, two Challenge Cups, a League Leaders' Shield and a World Club Challenge.

As a player, he made more than 250 appearances for Bradford Bulls and represented both England and Great Britain.

This report by The Canadian Press was first published Nov. 9, 2020