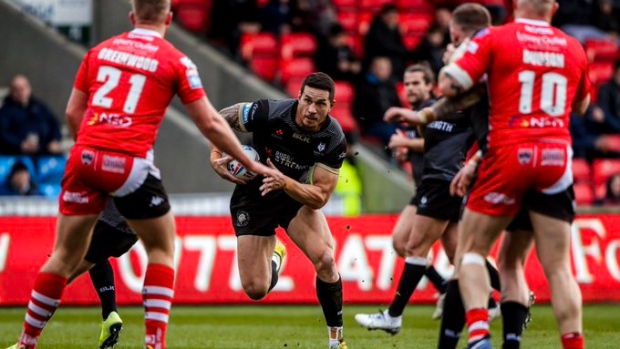 Toronto, which saw its 23-game winning streak snapped last week in its Betfred Super League debut in a 28-10 setback at Castleford, has now lost back-to-back rugby league games for the first time in its four-year history.

The Wolfpack (0-2-0) showed plenty of spirit, however, rallying from a 16-4 deficit to tie it at 16-16 on Brad Singleton's converted try in the 68th minute. But tries by Sarginson in the 74st and Evalds in the 77th minute sealed the Salford win. Evalds scored in his 150th appearance for the Red Devils.

Toronto coach Brian McDermott missed the post-game news conference, apologizing later on social media saying there was confusion over whether he was needed for media duties.

"Credit to Salford on their win," he added. "They handled the tougher periods of the game better than we did."'

Star signing Sonny Bill Williams, who came in off the bench in the 26th minute last weekend, started in the Toronto second row with James Cunningham coming in at hooker. For the second week in a row, Wallace started at fullback, with no place again for Gareth O'Brien, and absorbed a big hit early from Kevin Brown.

Wheeler came on early for Toronto, replacing the injured Joe Mellor, and scored on his first touch in the 18th minute. Brown's converted try put Salford ahead 6-4 in the 28th minute.

Both team went down a man late in the first half as Salford's Kris Welham and Toronto's Hakim Miloudi were sin-binned.

Joey Lussick, younger brother of injured Wolfpack forward Darcy Lussick, made a try-saving tackle for Salford early in the second half after he tracked down winger Liam Kay following a break by Matty Russell.

Salford made no mistake at the other end with Lolohea crossing the line with a converted try for a 12-4 lead in the 47th minute. Williams scored on the ensuing Toronto restart, racing 70 metres for a highlight-reel converted try that made it 16-4 after 50 minutes.

Starting on the bench, Toronto forward Bodene Thompson returned to action after missing the season opener with a calf strain.

Salford, which finished third last season at 17-12-0, was coming off a 48-8 loss at Grand Final champion St. Helens. But star halfback Jackson Hastings leading an exodus to other clubs in the off-season.