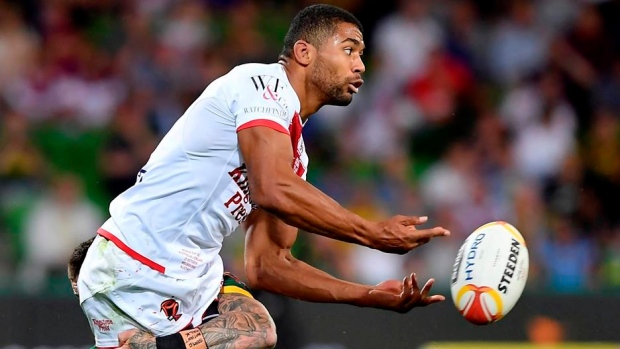 Watkins had been playing for the Gold Coast Titans in Australia's NRL, where his participation was limited to eight games in the wake of prior knee surgery. But the 29-year-old was granted a release on the weekend to return to England to be with his father, who recently contracted the coronavirus.

Watkins is a native of Manchester, near where the Wolfpack train.

The transatlantic team acknowledged talks to secure Watkins were near completion Monday, pending the approval by the Rugby Football League.

"We're just going through a bit of red tape with the RFL to be able to register him," said Toronto coach Brian McDermott. "But yeah, he's signed."

Watkins captained Leeds Rhinos under McDermott. He is an elusive runner with both power and pace — and an eye for the try-line.

He was 18 when McDermott took over the Rhinos in 2011, working his way into the starting lineup after legendary centre Keith Senior was sidelined by injury.

"He went on to become an international player and be one of the most dynamic, most exciting, most potent players in the game in Super League," said McDermott. "He played for his country many many times and became my captain at the start of 2018.

"What I saw in that time was a pretty shy, pretty introverted guy then develop into a pretty strong leader with conviction who had a fair amount of presence."

The addition of Watkins gives the Wolfpack a powerful combination in the centres alongside Australian-born Samoan international Ricky Leutele.

Watkins had played 25 test matches for England, 266 games for Leeds and claimed three Super League titles and two Challenge Cups when he signed with the Titans last June.

Watkins injured his anterior cruciate ligament in a game against Castleford in May 2018, missing the rest of the 2018 season.

McDermott says Watkins was not 100 per cent healthy Down Under. While players can return from ACL injuries from nine month to a year these days, it probably takes another year to get the leg back to where it used to be, he added.

Toronto has had much-publicized problems with the Super League's salary cap, but McDermott says the club has made the necessary room.

"We had some plans. It would be inappropriate to say what those plans are but I'm sure those plans will become common knowledge in the weeks to come," he said.

"I don't think any of the current squad need worry," he added.

The Toronto plans had included keeping forwards Ben Kilner and Jack Wells, who had been on one-month loans from Wigan Warriors, and possibly recruit other talent. That will likely not be the case now.

Watkins has also eased the burden by accepting "an incredibly low salary" for 2020, said McDermott.

"I think by Kallum's own admission, the last, I suppose, two seasons haven't been his best. But there's some real solid reasons why he wasn't able to be his best — the injury being part of it, the adversity of leaving the Rhinos and going to the Titans mid-season had another part to play."

Like other Super League teams, the Wolfpack have reduced salaries during the current hiatus.