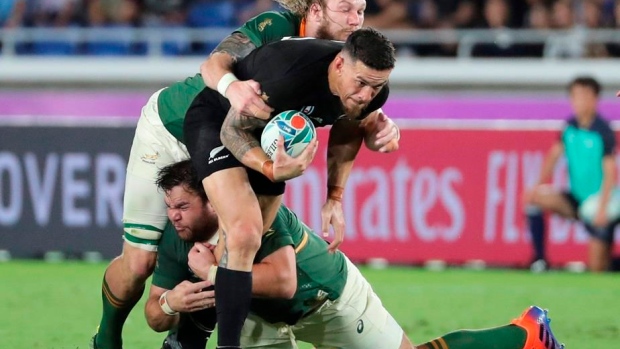 The Toronto Wolfpack have already proved doubters wrong by managing to establish a toehold for a little-known sport in North America.

Now the transatlantic rugby league team is opening the vault in the hope that All Blacks star Sonny Bill Williams will put it on the worldwide map as the Wolfpack prepare for their step up into England's top-tier Super League come February.

The Wolfpack confirmed Thursday that the 34-year-old Williams, a star in both of rugby's codes, has signed a two-year contract. The deal is worth a total of $9 million, with Williams getting an ownership stake, according to a source granted anonymity because they were not in a position to publicly divulge the information.

"Having someone of his talent join the Wolfpack will greatly raise the profile of the club, and also help move the game forward globally," Bob Hunter, the Wolfpack chairman and CEO, said in a statement. "Sonny is a phenomenal athlete and we believe he is rugby's LeBron James and his addition to our league is comparable to when David Beckham joined L.A. Galaxy."

The Wolfpack may not be finished yet.

England's Daily Telegraph reports Toronto is also interested in Manu Tuilagi, a Mack Truck of a centre who currently plays for Leicester and England.

Williams has won championships in both rugby union and league and has real star power in the sport around the globe. Williams has competed at three Rugby World Cups — winning two — and was part of the New Zealand rugby sevens team at the 2016 Rio Olympics before rupturing an Achilles tendon.

"I'm not coming over (to Toronto) for a holiday," Williams, holding his young son in his arms, said in a social media posting, "although my son might be. I'm coming over to do some work. And God willing we can have a successful season on and off the field."

While LeBron and Beckham are names known around the world, Williams is lesser known outside of rugby circles in countries where the sport is not big.

Former Canadian winger Phil Mackenzie, who faced against Williams at the 2011 World Cup, calls the Kiwi one of the best players in the world. But he wonders if his appeal will cross over to non-rugby fans.

"The huge thing that is different is that my wife knows David Beckham," Mackenzie said from Florida. "My wife is obsessed with what David Beckham does, his wife (Victoria), all this stuff. Whereas I don't think that's the case with Sonny Bill outside the rugby community.

"I don't see how he would have the draw to non-rugby fans for the Wolfpack."

Still, Williams' star power is bright. He will draw crowds both in the stands and among sponsors. His name alone is memorable. The fact that he is to be unveiled at a news conference at London's Emirates Stadium, home to Arsenal, on Nov. 14, speaks volumes.

The question remains is he a money-maker or loss-leader.

The Wolfpack have already prompted changes in the salary rules regarding the lower leagues. Now they are likely to push to open up the Super League guidelines to allow more star power.

Having a marquee attraction like Williams adds to their clout in the sport.

The club said its website crashed Thursday with 10,000 hits in a span of one minute. A spokesman said they sold a "significant number" of season tickets. Single-game sales begin in January.

Under majority owner David Argyle, the Wolfpack have shown a willingness to spend money to make money, building the brand first in the hope revenue will follow. The team paid for its own TV broadcast production costs, so as to be able to get Wolfpack on screens around the world.

And while the team has drawn well at Lamport Stadium — the October win over Featherstone Rovers in the Million Pound Game drew an announced sellout crowd of 9,974, a record for the second-tier Betfred Championship — it has been generous in ticket giveaways in the past.

It has also found innovative ways to help the team bridge the Atlantic. Faced with absorbing its opponents' travel and accommodation costs, it struck a sponsorship deal with Air Transat.

And it has made some cutting-edge partnership deals for CBD-infused products such as topical creams.

The Wolfpack have always dreamed big. Argyle, an Australian-born Toronto-based entrepreneur in the mining, energy and agriculture sectors, has plans to showcase his side in European markets to further widen the brand.

Still, Argyle's team has always been a bit of a conundrum. While nominally based in Toronto, the players and staff maintain homes in England and stay in temporary accommodations when they come to Canada.

It makes sense given most of the players are English. Ten of the 12 Super League teams calls England home, with the other being France's Catalans Dragons.

While Lamport is their playing home, they maintain a training centre in the Manchester area. Members of the team genuinely love their time in Toronto — which offers more to do than Wigan — but it is not their home.

For rugby league, the hope is that a rising tide floats all boats. That's especially true for the Ottawa franchise that Wolfpack co-founder Eric Perez plans to start play in the third-tier League 1 in 2021.

Williams, who has turned his public image around, now becomes the face of the Toronto franchise.

As a young man with the NRL's Bulldogs more than a decade ago, Williams was in the news often for the wrong reasons. There was a drunk-driving charge and headlines for public urination. Tabloids had a field day when he was found in a compromising position with a model at a Sydney hotel.

He also ruffled feathers by changing rugby codes and teams as it suited him.

A convert to Islam, Williams is now a family man with a nice way about him.

Williams earned a legion of fans at the 2015 World Cup final after New Zealand beat Australia at Twickenham. A young fan who had made his way on the field was tackled hard by a security official right in front of him as the All Blacks made their way down the sideline saluting the fans.

Williams helped the young boy up, put his arm around him and walked him back to his parents in the stands, giving him his winner's medal before exchanging hugs and parting ways.

A recent social media post showed him, on his return from the World Cup, surprising his two young daughters as they watched TV.

At six foot three and some 238 pounds, Williams is a powerful runner who has the uncanny ability to offload the ball to a teammate even when getting gang-tackled. He can also be a bruising defender.

Wolfpack coach Brian McDermott says Williams will need to get back in synch with the 13-man code again after five years in the 15-man game.

McDermott sees Williams starting in the back row, eventually transitioning to a more unstructured role like Wolfpack veteran Jon Wilkin as both playmaker and ball-carrier. Williams can initiate second-phase play through a pass or offload in the tackle and will draw plenty of attention, opening up the way for his teammates.

"He's an incredible athlete who can break a tackle himself," McDermott, who had dinner with Williams during the World Cup in Japan as talks grew serious, said in an interview. "But I'm keen to stress the bloke's not made of gold and he's not going to break tackles at will. The game's too tough.

"Defensively he's going to be brilliant for us as well. He's got some eye-catching tackles."

McDermott is realistic, however, saying Williams "is an addition to what we've already got going within the team. But I don't mind telling you he's a brilliant addition as well."

Williams left New Zealand for Australia as a 16-year-old to play rugby league in the NRL with the Canterbury in Sydney. In 2004 he became the youngest player to win an NRL premiership as the Bulldogs won the grand final.

He switched codes in 2008 to play rugby union for France's Toulon. Williams left two years later, saying he wanted to play for the All Blacks.

But such is the depth of the All Blacks that while Williams played in all five games at the recent World Cup, he only started two of them.

Williams went 7-0-0 as a boxer between 2009 and 2015, earning the vacant New Zealand Professional Boxing Association heavyweight title in 2012 with a TKO win over Clarence Tillman.

Another boxing victory was a controversial decision over 45-year-old Francois (The White Buffalo) Botha who fought — and lost to — Evander Holyfield, Wladimir Klitschko, Lennox Lewis and Mike Tyson.

While Williams was in trouble during the fight, he won a controversial decision after 10 rounds. The Botha camp claimed the fight as supposed to be 12 rounds and several betting companies ended up refunding their bets.

The Wolfpack started life in the third tier of English rugby league in 2017, winning promotion to the Championship in its first season and making the Super League on its second attempt to escape the second tier.

Training camp starts Nov. 11 in England. Williams is expected to join the team in late December or early January after working out on his own following the World Cup.