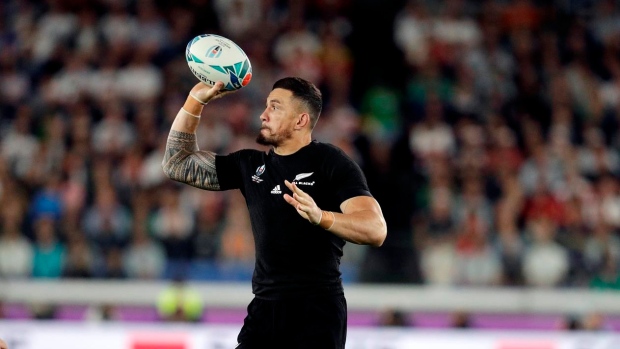 TORONTO — All Blacks rugby star Sonny Bill Williams continues to be linked with the Toronto Wolfpack, this time with a bumper contract offer.

In February, Wolfpack majority owner David Argyle confirmed that the transatlantic rugby league team had had "active negotiations'' with the agent for Williams, a powerful back who has excelled in both rugby union and league.

According to the Sydney Morning Herald, that interest has turned into a record-breaking contract offer worth as much as $9 million Australian (C$8,037,750) over two years.

Citing a source with knowledge of the contract negotiation, the Sydney newspaper says the contract would make the 34-year-old Williams the highest-paid player in the history of either rugby code.

"We have nothing to confirm at this time," a Wolfpack spokesman said Monday evening when asked about the report.

Williams is currently at the Rugby World Cup in Japan with New Zealand, which takes on Wales on Friday in the third-place playoff.

Argyle did not immediately respond to a request for comment.

"We look at the best talent in the world — Sonny Bill is one of those talents. In 2018 there was an outreach by the club to Sonny Bill Williams' agent for him to come here," Argyle, a Toronto-based Australian who works in the mining, energy and agriculture sectors, said in an interview at the time.

"We want to secure one of the top five rugby players in the world to come to Toronto. That continues to be our ambition. We'll do everything possible ... to get one of them here.''

The Wolfpack started life in the third tier of English rugby league in 2017, winning promotion to the second-tier Betfred Championship in its first season. It won promotion to the top-tier Super League in October with a 24-6 win over Featherstone Rovers in the Million Pound Game.

Williams, a two-time World Cup winner, has represented New Zealand internationally in both rugby union and rugby league. He was part of the New Zealand rugby sevens team at the 2016 Rio Olympics, partially rupturing an Achilles tendon in the All Blacks' first match.

At six foot three and some 238 pounds, Williams is a powerful runner whose ability to offload the ball in a tackle extends attacks.

Williams left New Zealand for Australia as a 16-year-old to play rugby league in the NRL with the Canterbury in Sydney. In 2004 he became the youngest player to win an NRL premiership as the Bulldogs won the grand final.

He switched codes in 2008 to play rugby union for France's Toulon. Williams left two years later, saying he wanted to play for the All Blacks. He made his New Zealand debut against England in 2010 and currently has 57 caps.

He has also played club rugby for the Crusaders, Chiefs and Blues in Super Rugby and Japan's Panasonic.

In 2013-14, he switched codes again to play for the NRL's Sydney Roosters.

Williams went 7-0-0 as a boxer between 2009 and 2015, earning the vacant New Zealand Professional Boxing Association heavyweight title in 2012 with a TKO win over Clarence Tillman.