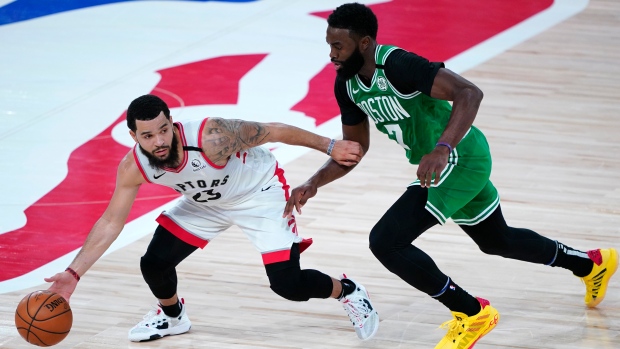 TORONTO – For many NBA players, the basketball court has always been a sanctuary.

It’s a place that has helped some of them heal from personal tragedy or hardship, a place where many feel at home and know they can be their best selves, where they’re able to tune out the noise or escape from the outside world, when and if they choose.

But what happens when what’s going on outside of the gym is far more important than whatever’s happening inside of it?

In the wake of Sunday’s incident in Kenosha, Wisconsin – where Jacob Blake, a 29-year-old Black man, was shot by police – the Milwaukee Bucks took a courageous stand and made history on Wednesday afternoon.

Leading 3-1 in their first-round series with the Orlando Magic, the Bucks opted to remain in their locker room and boycott Game 5 in an effort to effect change and demand justice for Blake, George Floyd, Breonna Taylor and the many victims of police brutality and systemic anti-Black racism.

Orlando players, who were warming up on the court ahead of the 4 p.m. tip-off time before heading back to the locker room, chose not to accept Milwaukee’s forfeiture. Moments later, it was reported that the Oklahoma City Thunder and Houston Rockets would follow the Bucks’ lead. The Portland Trail Blazers and Los Angeles Lakers had planned to do the same, though the NBA eventually announced that all three of Wednesday’s games would be postponed.

But they weren’t “postponed”. Not really.

This was a powerful statement made by Bucks players, and those that followed in choosing not to play. It’s one that the Toronto Raptors and Boston Celtics helped push forward in the days and hours leading up to Milwaukee’s decision.

Publicly, the idea of a potential boycott emanated from the Raptors on Tuesday. Toronto’s players had met in the morning to discuss ways in which they could elevate their response to the police shooting of Blake. Skipping Thursday’s second-round series opener against Boston – and perhaps more games after that, or even the rest of the playoffs – was the most drastic option on the table.

Players from both teams met at their shared hotel on the Walt Disney World Resort campus Tuesday night, as first reported by Marc Spears of ESPN’s The Undefeated and confirmed by Raptors head coach Nick Nurse.

“The players are deeply disappointed that the same thing happens again in a relatively short timeframe,” said Nurse. “They want to be part of the solution, they want to help, they want justice. They want this particular problem to be handled in a much better way. That’s the first thing. Boycotting the game has come up for them as a way to try to demand a little more action. That’s really what they want. I think there’s enough attention and not quite enough action and that’s what I can sense from the discussions, is their disappointment.”

Blake is in critical condition after being shot multiple times in the back by police as he tried to enter his vehicle, while his three young children waited and watched from inside. The incident was caught on video. The three police officers that were on the scene responding to a domestic dispute, including the one who pulled the trigger, have been put on administrative leave as Wisconsin’s Department of Justice conducts its investigation.

While the NBA, its teams and players have made the fight for social justice a focus of the restart in Orlando, it’s become clear that the Black Lives Matter messaging or kneeling during the national anthems aren’t enough to influence real, meaningful change.

“We came here for a reason and using our platform and wanting to send a message and hopefully bring awareness and bring a change, but I don't know,” said Raptors forward Pascal Siakam, who admitted he was too traumatized after seeing Floyd killed at the hands – or the knee – of a Minneapolis police offer to watch the Blake video. “It just feels like we're stuck. It feels like things are not changing. It feels like we're not doing anything productive, basically. That's how it feels. For me, those things hurt. I don't care where you're from, I don't care what's happening, just seeing that and just knowing that every day it happens and it feels normal, just seeing Black men being shot every day, that hurts, man.”

The players know that boycotting games won’t be enough to solve a problem that’s existed for centuries, either. However, the hope is that this can be the next step in advancing the cause and forcing people to act, including and especially those people with the power and the capital to truly spark significant change.

“We know the importance of the platform that we have and we know that we have enough power to not only trickle down things on [our] teams and our owners but also on our communities,” said Celtics forward Grant Williams. “That's kind of how this world works. We have the platform [and] when we speak up, people listen. That's really what we are focused on and what we're trying to communicate to one another.”

“Our mentality is: 'How can we keep taking these steps day by day to encourage change?' It's really difficult to think about because this bubble, yes, we're playing basketball and it's supposed to be our [sanctuary], but we're over here, guys are crying, guys are hurting right now because of what's going on. You never know if that was your brother, what if it was my cousin or family member? That's something that weighs down on you and it's something that is very trying to the mind and we each have to do something about it.”

The question is, what comes next? According to multiple reports, the NBA’s players will meet on Wednesday night to discuss where things go from here. It seems unlikely that Thursday’s games – including the series opener between Toronto and Boston – will be played as scheduled. Do they even finish the campaign? Nurse indicated that a few of his Raptors players have expressed a desire to leave the bubble. Boston’s Jayson Tatum echoed that sentiment in regards to the Celtics, as well.

“As much as we’d love to go back to our communities and stand with our people, we’re in this bubble and kind of isolated from everybody else, and I think that’s very frustrating,” said Tatum. “A lot of players have voiced that. I know some guys have talked about going home to be there instead of being isolated.”

Some players will certainly argue in favour of finishing the season, given the sacrifices that have already been made, and finding ways to make a difference while playing games. It’s not an easy decision, and not everybody is going to agree on the best way forward.

You can see the raw emotion on the faces of each player that has spoken publicly this week. Milwaukee’s George Hill admitted that he made a mistake agreeing to participate in the restart. Toronto’s Fred VanVleet and Norman Powell each spoke for over 15 minutes, expressing their frustration and searching for the words to explain what this experience has felt like.

Their focus isn’t on basketball. How could it be?

“People are upset or angry and we’re just trying to come together and figure out a way how we can do something,” said Tatum. “Obviously people are going to say, ‘Well, what is sitting out going to do?’ Obviously, if we sit out a game or the rest of the playoffs, we understand how big of an impact that will have. Everybody’s going to have to talk about it, continue to raise awareness. We don’t want to just keep playing and forget about what’s going on in the outside world, because it’s affecting us. It’s affecting everybody. We’re more than just basketball players; we’re people. And we have these raw emotions and feelings.”​