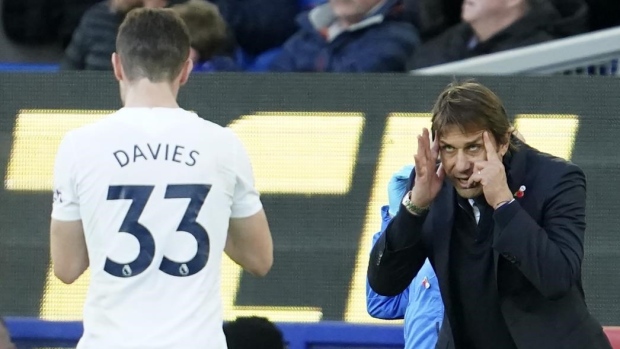 LIVERPOOL, England (AP) — Tottenham manager Antonio Conte endured a frustrating start to his Premier League return with a 0-0 draw at Everton on Sunday.

Conte, who won the 2017 title with Chelsea, witnessed his new side come off second best to opponents beset by injuries and low on morale after not winning in their previous four matches.

Tottenham, which fired Nuno Espirito Santo on Monday, has now gone three hours and 47 minutes without registering a shot on target in the league on another lackluster day for Harry Kane.

Everton, which had a penalty award overturned by VAR and substitute Mason Holgate sent off in the 90th minute just eight minutes after coming on, had two attempts on target.

In the meeting of two under-achieving sides, Everton had more of an excuse with key players Dominic Calvert-Lewin, Abdoulaye Doucoure, Andre Gomes and Yerry Mina out injured.

Everton is in 11th place and Tottenham is two places better off.