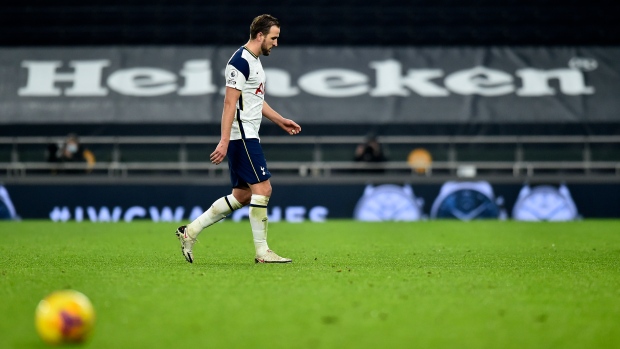 Tottenham Hotspur captain Harry Kane was absent from training for a second straight day on Tuesday as he attempts to push through a transfer.

The 28-year-old England striker is expected to be fined for failing to report.

Kane has yet to undergo a COVID-19 test ahead of his return from time off after the conclusion of Euro 2020 and cannot rejoin the team until one is taken.

The Spurs academy product favours a move to Manchester City and Pep Guardiola's side would like to bring him aboard, but the two teams remain far apart on a transfer fee. City tabled an official bid for Kane's England teammate, Aston Villa winger Jack Grealish, believed to be in the neighbourhood of £100 million, which would be the transfer record for an English-born player, eclipsing the £80 million paid by Manchester United to Leicester City for defender Harry Maguire in 2019. Should City be successful in their pursuit of Grealish, it would be unlikely that the club would make another significant outlay on Kane.

Spurs have two friendlies remaining before a season-opening fixture against City on August 15.