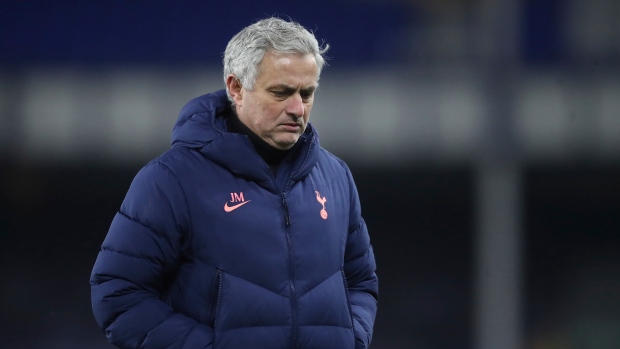 Tottenham Hotspur have lost five of six Premier League matches, sit ninth in the table and are nine points adrift of West Ham for the final Champions League place.

"I wouldn't say 'crisis,'" Mourinho said after Sunday's 2-1 defeat to Hammers. "I would say a bad, a really bad, run of results. That is obvious. We're losing too many matches."

A defiant Mourinho denied the suggestion that the team's run of form is due to his coaching tactics, saying that he and his staff are the best in the world.

"Mine and my coaching staff's methods are second to nobody in the world," the three-time Premier League winner said. "I think for a long, long time, we have problems in the team that I cannot resolve by myself as a coach."

The 58-year-old Setubal, Portugal native did concede that qualification for next year's Champions League might be out of reach through finishing in the top four and that Spurs' hopes could rest in winning Europa League. The club took a 4-1 lead over Austrian side Wolfsberger in the first leg of their Round of 32 tie last week.

Spurs return to league action on Sunday when they host Burnley.