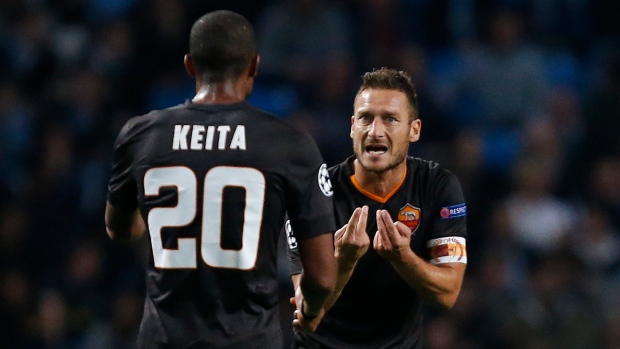 Three days after his 38th birthday, Totti become the oldest scorer in the Champions League's 22-year history by lifting a deft finish into the corner in the 23rd minute, showing his instincts in front of goal aren't waning with age.

The goal cancelled out a fourth-minute penalty won and converted by Sergio Aguero and put the Italian club in command of a likely race with Premier League champion City for second place in Group E behind Bayern Munich. Roma has four points from two games, three ahead of City and two behind Bayern.

"We have shown tonight we are at the height of this group," Roma coach Rudi Garcia said. "We played against the champions of England, one of the richest teams in the world ... and my team played with personality and a certain confidence."

Totti — playing as a lone striker in front of a lively Roma midfield — celebrated his goal with the familiar thumb-sucking routine that has followed so many strikes down the years. He broke the record held by Manchester United great Ryan Giggs, who was 37 years and 9 months when he scored against Benfica in 2011.

"I took great pleasure in his goal," Garcia said. "His talent is what made the difference in front of the keeper."

Aside from a strong final half-hour, City's performance was as subdued as the atmosphere inside Etihad Stadium, where there were about 10,000 empty seats for one of the top games in Europe this week.

City manager Manuel Pellegrini persevered with two strikers in Aguero and Edin Dzeko but that meant the team's midfield was overwhelmed at times, like it had been in games against Champions League heavyweights Barcelona, Bayern and Borussia Dortmund in recent years.

Roma thrived in the first half, with Gervinho ubiquitous in his roving attacking role and Miralem Pjanic showing vision as the playmaker in a fluid midfield that had too much movement for City.

"Maybe we were not very accurate with our passing," Pellegrini said, "so when we started losing too many balls we did not have enough midfielders to recover."

City improved after bringing Frank Lampard on for Dzeko and shifting to a 4-5-1 formation, but never seriously threatened Lukasz Skorupski's goal despite dominating possession late on.

After opening with a 1-0 loss in Munich, City's Champions League struggles continue. Despite the vast sums of money in the six-year regime of Sheikh Mansour, the club has only advanced from the group stage once in three seasons.

"We have just one point," Pellegrini said, "but also we are just three points behind Roma so there are a lot of things," to play for.

City's only clear-cut chance of the first half was the penalty, awarded when Maicon tugged Aguero as the striker ran onto David Silva's pass. Maicon, who endured a disappointing year at City in the 2012-13 season, was the last man but received only a yellow card.

Aguero picked himself up and sent Skorupski, standing in for the injured Morgan De Sanctis, the wrong way from the spot.

City described Totti as a "legendary player" in a post on the club's Twitter account before the game, adding: "He's never scored in England, has he?"

Obviously, that was tempting fate.

Totti created a chance for Maicon with a brilliant through ball with the outside of his foot in the sixth minute. Maicon crashed his shot against the bar, keeping City's lead intact, but Totti made no mistake when he had his first sight on goal.

Radja Nainggolan slipped a pass through a gaping hole in City's defence and Totti showed a turn of pace, to run onto the ball and clip a delicate shot over goalkeeper Joe Hart.

Last-ditch tackles were required in City's defence in the 15 minutes either side of halftime and Hart produced a brilliant save early in the second half to deny Pjanic.

Roma deserved a point and showed it could be one of the surprises of this season's competition, having started group play with a 5-1 thrashing of CSKA Moscow.