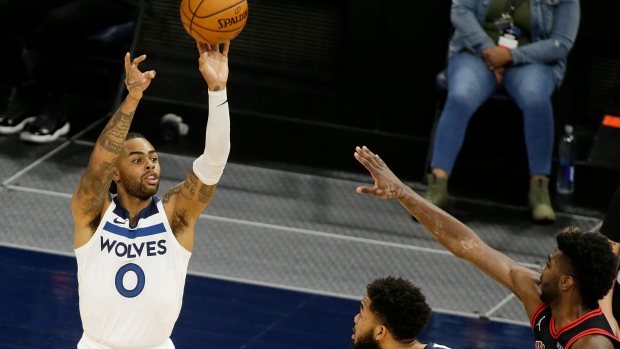 Ricky Rubio connected on five of his six 3-point attempts and scored 17 points. Rookie Anthony Edwards added 15 points for Minnesota, which held on a game after allowing Boston to come back from 17 down in the second half in an overtime loss on Friday.

“I think, for us, it was just more about staying solid, continuing to play our game plan no matter how things went," Towns said. “I think we showed a lot of discipline tonight.”

Two days after his first 50-point game, Zach LaVine scored 21 of his 30 points in the second half as Chicago tried to mount a comeback. LaVine was 13 of 28 from the field and 4 of 12 from 3-point territory.

Nikola Vucevic had 18 points and Daniel Theis scored 13, but the Bulls lost for the sixth time in nine games since acquiring the two players at the trade deadline.

“We got a lot of work ahead of us, I’ll tell you that,” Chicago coach Billy Donovan said of the team's defence. “We need to be a whole lot better than we are.”

The Timberwolves have started games slowly this season and have led at halftime just 10 times in their 54 games. But they’ve held 11-point halftime leads in each of their past two games. This time, they made the lead stand.

Minnesota used a 21-8 run in the first quarter to take control. The Wolves took their first lead with 7:28 left in the first and never trailed the rest of the way.

“No game is going to be perfect, but we’ve just got a win, just frustrating losing,” LaVine said. “I feel like we didn’t come out the right way, tried to turn it on in the second half, and, obviously, they’ve got some big-time players on their team. So do we, but we’ve got to figure out a way to win.”

Chicago cut the lead to one several times in the fourth, but Minnesota answered each challenge. After LaVine connected on a 3 to make it 103-102, Russell re-entered the game and helped the closing push with seven points in the final 3:36.

Towns added a punctuating 3 in the final minute and closed out the game with a pair of free throws.

Bulls: Garrett Temple missed his seventh straight game with a right hamstring strain. … Troy Brown Jr., another trade acquisition, has taken Temple’s place as a defensive wing off the bench. Brown had 15 points and seven rebounds in the game.

Timberwolves: Towns just missed a triple-double with eight assists. It’s his 57th career game with at least 10 points, 10 rebounds and five assists. … Edwards extended his streak of games with a steal to 22, the longest active streak in the NBA and the longest streak by a rookie in franchise history.

A day after former baseball star Alex Rodriguez and e-commerce mogul Marc Lore signed a letter of intent to buy the Timberwolves, coach Chris Finch was asked his thoughts on the impact new ownership could bring to Minnesota. The first-year coach said he loves baseball but hasn’t had a chance to speak with the potential new ownership.

“I’m sure he understands sports at a very high level,” Finch said of Rodriguez. “He’s certainly going to bring some sex appeal to the organization, to the city, to the team. We’ve got again, just the more skill sets and personality types that you can bring to an ownership group, the more it’s going to be reflective of the overall mission.”

Rodriguez and Lore have a 30-day window for negotiations, which includes the WNBA’s Minnesota Lynx, to be finalized. The Athletic first reported the sale to be worth $1.5 billion.

Finch said he spoke with current owner Glen Taylor in the morning.

“He was very assuring that the transition would be smooth and that it’s his intention to give everybody the best chance at success here and he’s excited about the opportunities that are ahead,” Finch said.

The Timberwolves honoured Towns’ mother, Jacqueline, before the game and had an open seat reserved for her with flowers. Jacqueline died April 13 last year due to complications from COVID-19. Towns’ father, Karl Sr., sat courtside for Sunday’s game.

“It means everything to me,” Towns said of winning the game and sharing a postgame hug with his father and LaVine. “Obviously, you know what the next two days are for me. Life just sometimes ain’t fair.”

Bulls: At Memphis to play the Grizzlies on Monday night.

Timberwolves: Host the New Jersey Nets on Monday night. New Jersey, already without James Harden, announced that Kyrie Irving would be out of the game for personal reasons.