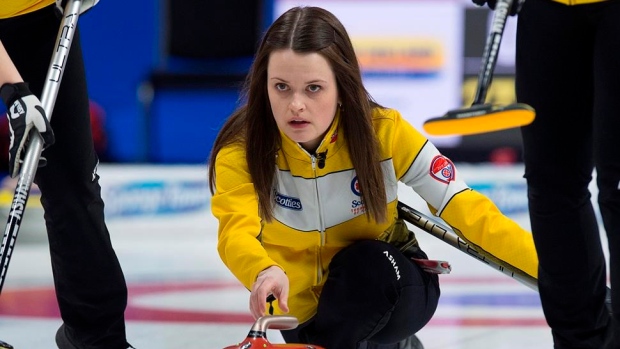 The second of three straight events in Oakville took place this long weekend with the Oakville Labour Day Classic.

On the men’s side, Brad Jacobs and his Sault Ste. Marie rink of third Marc Kennedy, second EJ Harnden and lead Ryan Harnden ran the table with a 7-0 record, capping the event off with an 8-2 rout of Kingston’s Jonathan Beuk, who were being skipped by Tanner Horgan.

Not a bad start this season with an undefeated run at the Oakville Labour Day Classic! So many great opponents and we are ecstatic to come away with a W.

Thanks to everyone who tuned in to the live streams and cheered us on from home!! pic.twitter.com/Q6AX3zU4wk

Team Jacobs scored a five spot in the second end and the sides shook hands after just four ends.

Horgan led Team Beuk to the final at last week’s Oakville Classic where they fell to Glenn Howard. Horgan got the better of Howard at the Labour Day Classic with a 3-2 win in the semifinals to punch his team to Monday’s final against Jacobs.

Other notable names included Surrey, B.C.’s Tyler Tardi who fell to Jacobs in the semis as well as Mike McEwen and John Epping, who both lost in the quarterfinal round. Saskatoon’s Colton Flasch went 2-3 and missed the playoffs.

In the women’s draw, Tracy Fleury of East St. Paul, Man., also put together a perfect 7-0 weekend to capture the Oakville Labour Day Classic following an 8-7 victory over Charlottetown’s Suzanne Birt in the final.

All smiles after a fun start to the season this weekend at @OakvilleCurling! #curling #BrettYoung pic.twitter.com/FVMkTZKxw9

Down 7-4 after six ends, Fleury put up a three-spot in the seventh before stealing a single in the final end to pick up the comeback victory. Team Fleury is rounded out by third Selena Njegovan, second Liz Fyfe and lead Kristen MacCuish.

Like Team Beuk, this was also the second straight finals loss for Team Birt in Oakville. At the Oakville Fall Classic last weekend, Birt dropped an 8-6 decision to Jamie Sinclair in the final.

Jennifer Jones and Hollie Duncan both advanced to the semifinals at this event where they lost to Birt and Fleury, respectively.

Fleury and Jacobs have both already qualified for the Canadian Olympics Trials in November.

Last season, the 57-year-old Anderson and her team of third Nancy Martin, second Chaelynn Kitz and lead Breanne Knapp represented Saskatchewan at the Scotties Tournament of Hearts for a 10th time, making it to the championship pool and finishing with a 6-6 record.

Overseas at the Euro Super Series, Rebecca Morrison and her squad from Great Britain defeated Sweden’s Isabella Wrana, the 2017 world junior champion, in the final, 7-2.

Reid’s team was rounded out by Lauren Gray at third, Jennifer Dodds at second and Mili Smith at lead.

On the men’s side of the draw, Switzerland’s Yannick Schwaller and his rink of third Michael Brunner, second Romano Meier and lead Marcel Käufeler edged Scotland’s Ross Whyte in the final, 5-4.

Finally, Switzerland’s Marco Hoesli captured the Adelboden International with a 6-3 victory over Bjorn Jungen in the final.