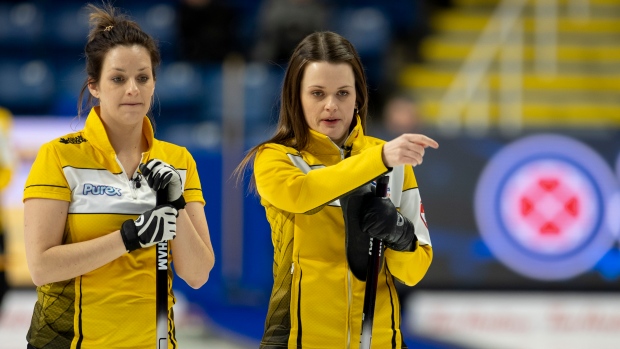 OAKVILLE, Ont. — Tracy Fleury scored a deuce in an extra end for a 9-7 victory over Jennifer Jones in the women's final at the Masters on Sunday afternoon.

Down one without hammer in the eighth end, Jones, a Winnipeg native, used her final stone to gently tap her shot rock to sit two.

Fleury, from East St. Paul, Man., managed to clear out one stone after a fortunate redirect to force the extra end. She maintained hammer after the steal and put the pressure on Jones to score the pair for the victory.

Brad Jacobs of Sault Ste. Marie, Ont., dropped a 7-5 decision to Scotland's Bruce Mouat in the men's final later in the day at the Sixteen Mile Sports Centre.

Mouat made a takeout to score three in the eighth end for the win.

"It's very exciting," Mouat said. "We're so glad to be back at the Slams and playing good curling. To be able to win a competition like this, it feels like we're doing something right back home when we're training.

"Playing in front of Canadian crowds is always a lot of fun."

The Masters is the first event on the five-stop Grand Slam of Curling calendar.