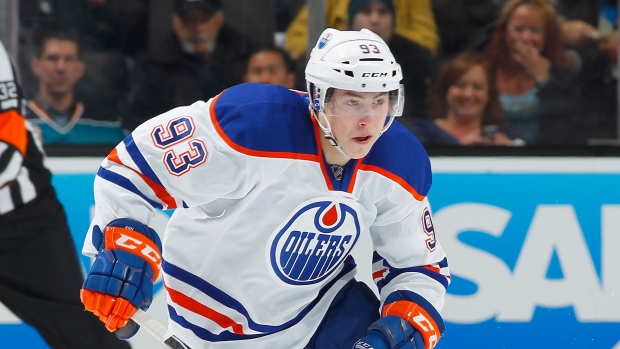 Sometimes it’s hard to know where to begin with the Edmonton Oilers, especially in the wake of an ugly 3-0 loss to the Toronto Maple Leafs and the subsequent flurry of trade rumours that could signal the beginning of yet another rebuild. 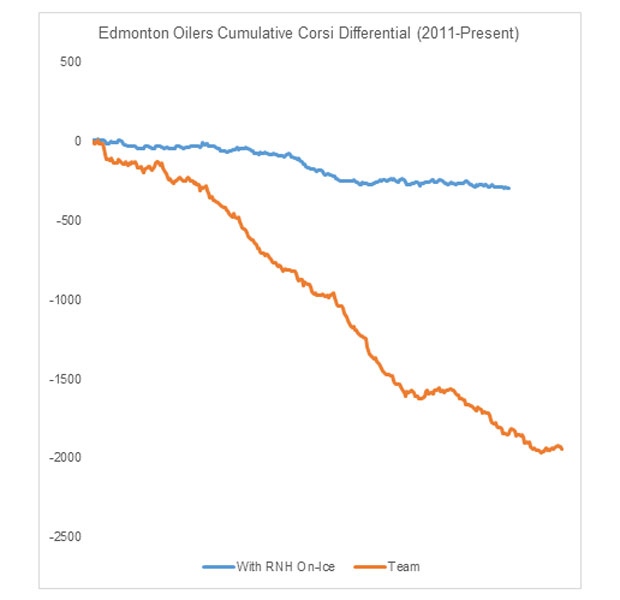 Let that sink in for a minute. Now look how it’s translated into goals, which drive performance in the standings: 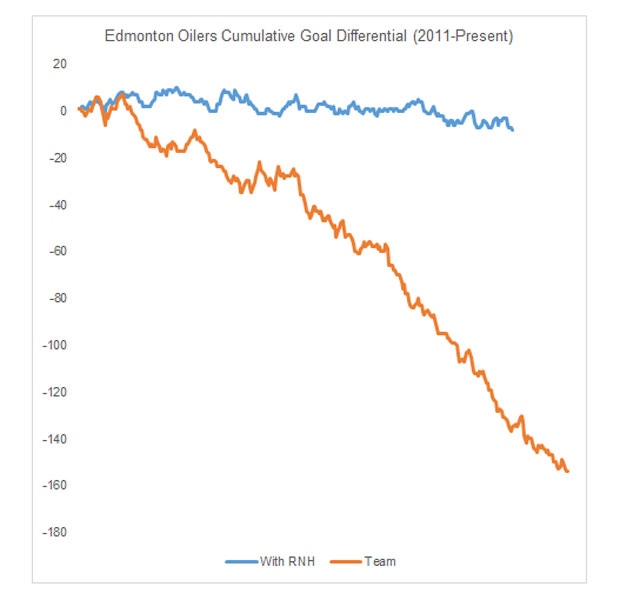 Now a casual observer might look at these graphs and say, “Boy, this team sure is bad!” And that’s certainly a sensible conclusion. No team’s been as battered at 5-on-5 as the Edmonton Oilers over the years - and that despite a series of fantastic draft lottery results.

A more careful observer may suggest that the team isn’t entirely flawed. After all, at least one player has managed to get by on a really bad team. Ryan Nugent-Hopkins has managed to nearly break even in shot-differential and goal-differential. And that’s a remarkable feat when you consider the rest of the team has been consistently beaten to a bloody pulp.

That’s what makes the discussion about trading Ryan Nugent-Hopkins so perplexing. For years, he and Taylor Hall have been trying to keep the team from being obliterated night in and night out. They have had at best, a poor supporting cast, highlighted by a blue line that’s either a half-step too slow or a bad pass away from adding to the turnover count.

The goaltending has been abymsal. And the depth forwards assembled to take pressure off the first line have been caved in relentlessly by superior competition.

This is hardly the new regime’s fault. You can pin a couple of suspicious trades on Peter Chiarelli, but he’s only held the reigns for six months. Todd McLellan’s been one of the league’s best coaches for years and not surprisingly, went to bat for his centre in a big way on Wednesday afternoon.

I’d be a bit more willing to embrace the ‘Trade Nuge’ talk if there was a rational argument to build on. Can it repair a battered blue line? And even if it can, would that trade offset the glaring step back this organization is going to take down the middle of the lineup? I’m suspicious it would work, but it’s at least a thought.

The actual reason seems to be that Nugent-Hopkins is a ‘soft skill’ player, the type of player who runs parallel to what Peter Chiarelli’s teams generally look like. I find this mystifying. First, I’m not entirely sure how one could classify Nugent-Hopkins as a soft player. We’re talking about a player who fought through an obvious shoulder injury earlier in his career, yes?

Even if Nugent-Hopkins is a ‘soft’ player - who cares? He’s been in the league for years and has never looked overwhelmed. And if he was truly soft, it would show in his numbers. He wouldn’t dominate the play. He wouldn’t win any puck battles. His scoring would be limited and the chances and shots other great centres suppress with their physicality and tenacity would bleed in the opposition’s favor whenever he was on the ice.

I know that because if I drop Ryan Nugent-Hopkins (and his numbers over the last four years) on a list with four other excellent centres, you probably can’t pick his name out of the group. Go ahead though. Give it a shot. Which one is Nugent-Hopkins?

If you chose Player C, pat yourself on the back! Who are the other four players?

Quite an impressive group, I’d say.

Why do I think this is a valuable exercise? Well, it’s hard to imagine Los Angeles, Minnesota, Philadelphia or Washington entertaining serious trades of those four pivots, and that’s because a fair value trade likely isn’t out there. The only thing a team could reasonably offer for this type of asset is a ridiculous combination of futures - prospects and picks. And it doesn’t look like Edmonton’s going back down that road.

So again, what’s to be accomplished by trading Nugent-Hopkins?

Trading Ryan Nugent-Hopkins is a bad idea. An extremely bad idea. I sympathize with the organization to the extent that they feel they need a shake-up after another slow start to the season. But building this team into a contender is more about ironing out the litany of mistakes made in the middle and at the bottom of this roster, rather than trying to figure out how to turn the only dollar in your pocket into eighty cents.