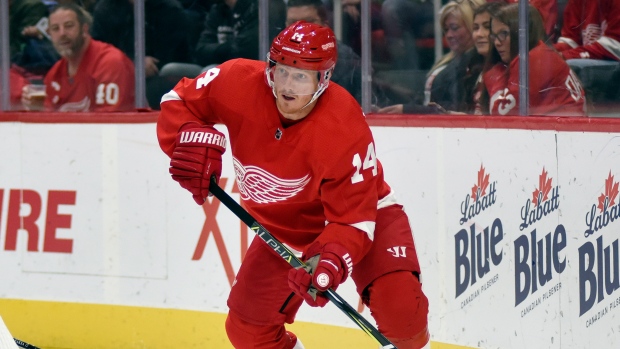 Gustav Nyquist debuted at No. 5 on TSN Hockey's first Trade Bait list of the season earlier this week, but being on the trade block does not come as a surprise to the Detroit Red Wings winger.

Nyquist, who has never been traded in his NHL career, knows that his expiring contract - which carries a $4.75 million cap hit - will draw interest on the rental market.

“It’s a business and that’s part of the game,” Nyquist told the Detroit Free Press on Thursday. “I’m sure my name will pop up. It will be a little bit new situation for me because this is my last year of the contract. It’s different, but it’s nothing I’ve thought about. Probably more as I get closer to the deadline. We’ll see.”

The 29-year-old topped the 20-goal mark for the third time in his career last season. He's off to a slower start in goal scoring this year, but has nine assists and 10 points through 13 games.

“He’s a guy who can certainly have a better shooting mentality at times,” Blashill said Thursday. “I haven’t seen that to a gross level this year, where it’s something that’s just been real evident he’s totally passed up shots, but he’s definitely somebody who in the past we’ve had to make sure that we remind him he has to shoot the puck first.

“He came into training camp in great shape, he came in and had a real good start in terms of his approach. Like everybody else he was snake-bitten early and that can be a frustrating thing. He like a number of guys on our team got away from what it’s going to take to be successful and probably started to hope or cheat a little bit for offense, and as I said after the Montreal game, that’s a natural thing, but it can’t happen. When it’s not going in, you have to stay with it.

"I think he’s been better here lately. He and I spoke today — I’d like to see him be a little harder on the forecheck, when he does that, it really brings the aggressiveness out in his game and he’s a better player.”

Nyquist is one of three right wingers in the top five of the Trade Bait list, joined by Toronto Maple Leafs forward William Nylander and fellow pending UFA Mats Zuccarello of the New York Rangers.