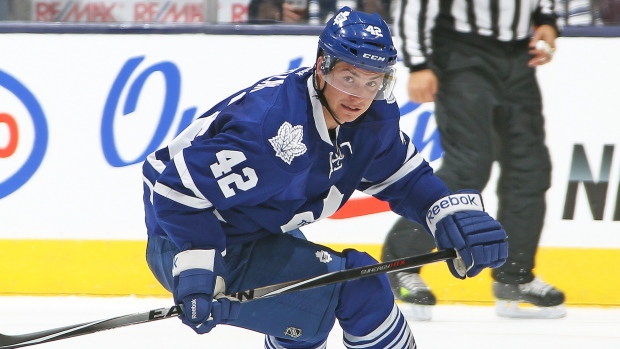 Leafs on the market?

Rob Longley of the Toronto Sun reported on Saturday that rumblings have Leafs forward Tyler Bozak on an "extensive" list of available players.  He also mentions that 13 scouts were on the official press box list for Saturday's victory over the Edmonton Oilers and that the team is not close to signing pending free agents Cody Franson, Daniel Winnik and Mike Santorelli.

The Anaheim Ducks are the NHL's best but they could be looking to upgrade on the blue line.  Eric Stephens of the OC Register reported on Saturday that the Ducks have inquired about Buffalo Sabres defenceman Tyler Myers and that his name comes up in most of the trade speculation about the team.

Bruce Garrioch of the Ottawa Sun quotes a league executive saying that Evander Kane can't play for the Winnipeg Jets again due to all of the damage that has been done.  His Sunday report lists the Edmonton Oilers, Ottawa Senators and Montreal Canadiens among a long list of teams that could have interest, however it is noted that there would be no sense making a deal before the March 2nd deadline.

In the same report, Garrioch also mentions that Sharks GM Doug Wilson has been trying to make a deal all season and specifically notes defenceman Zybnek Michalek of the Arizona Coyotes as a target.

Joe Smith of the Tampa Bay Times wrote late on Saturday that the Lightning could be in the market for a defenceman.  With Radko Gudas and Matt Carle out of the lineup, Smith reports that GM Steve Yzerman is at least exploring opportunities to add a defenceman.

Sam Carchidi of the Philadelphia Inquirer wrote early Sunday that if both Kimmo Timonen and Braydon Coburn can get back into the Philadelphia Flyers lineup the team would be wise to trade both men before the deadline.  He mentions the Los Angeles Kings, St. Louis Blues and New York Islanders as possible trade partners.